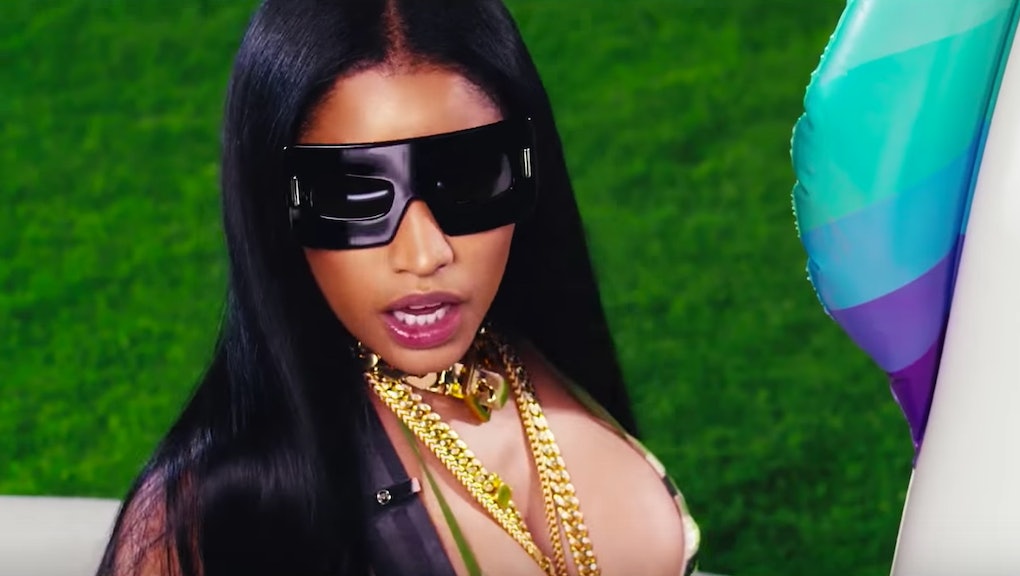 Nicki Minaj and Gucci Mane throw a pool party but neither go swimming in the new visual for their collaboration "Make Love." Mane gets a mansion full of women in bathing suits turned up and Minaj raps in a solo scene while riding on an inflatable unicorn doll. Both rappers rock their flashiest jewelry to the function. Watch the music video for "Make Love" in full below.

Minaj's lyrics on the single were believed to have been the catalyst that sparked a rap beef with fellow rapper Remy Ma in February.

On the track, Gucci raps about being in his zen space: ignoring petty beefs, meditating and focusing on his wedding plans — which include booking Beyoncé for the occasion, according to the song's lyrics.

Minaj, on the other hand, had choice words for someone on the track.

Your career gon' be with Anna Nicole

Although, Nicki didn't drop any names, fans immediately speculated that the lyrics took aim at Remy Ma or Azealia Banks. Remy Ma released the 7-minute diss track "Shether" the day after "Make Love" dropped. After two weeks of silence, Minaj clapped back on her track "No Frauds," featuring Drake and Lil Wayne.

Post-"Shether," Minaj was unbothered and spotted front row and mingling with the fashion world's elite at Paris Fashion Week. The rapper, who has been a muse of designers Riccardo Tisci and Betsey Johnson, announced she signed a modeling contract with Wilhelmina's modeling agency Tuesday. "I love the synergy between my music and how it inspires my fashion. My message is always celebrating your own style," she told Vogue.

Minaj is also expected to drop a visual with Future soon. In February she posted a series of behind-the-scenes photos from a shoot they did together.

2017 is Minaj's official return to music. Her last studio album was The Pinkprint, released in December 2014.