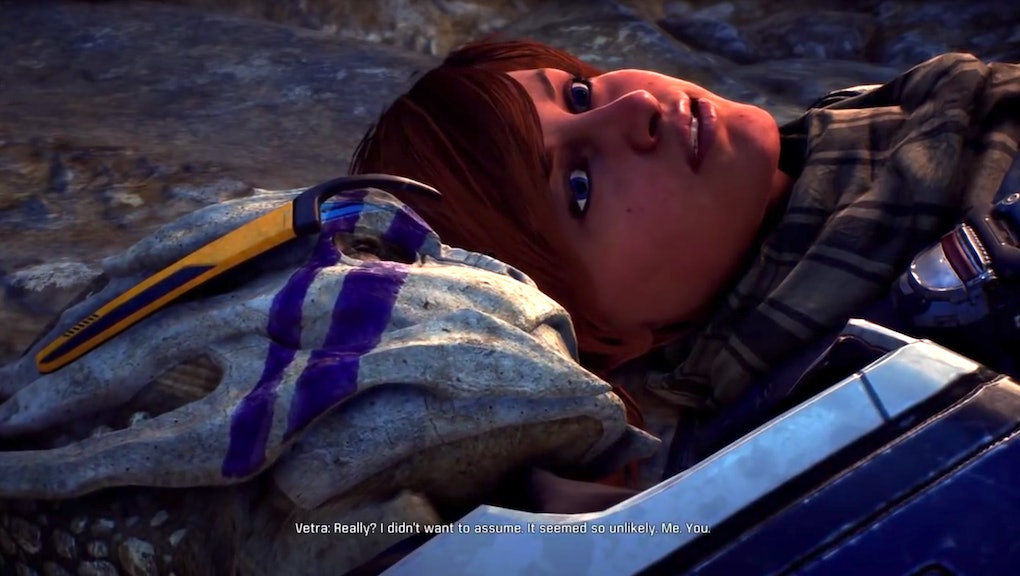 Perhaps you've heard the news: The same-sex romance options for male characters in Mass Effect: Andromeda — and the Mass Effect series as a whole — are woefully lacking in comparison to every single other possible coupling combination.

In response to these stats, there's a movement underway in the Mass Effect fandom to get the attention of BioWare and let it know that its underwhelming male-male romances are a problem. After all, a 2009 survey found that gay gamers are most interested in role-playing games with good stories and positive LGBTQ inclusion — Mass Effect: Andromeda, in theory, should have been a home run. So to disappoint that portion of its fanbase is particularly frustrating.

Not everyone is onboard, however. One dissenting response I've heard goes something like this: "But, female-female romances are just as high as female-male romances, so clearly there is no inequality here!"

Nice try, but that argument doesn't hold up. If anything, the increased prevalence of female-female relationship options in comparison to those between two men is even more proof that gaming companies still cater mostly to the interests of straight males.

Despite BioWare's reputation for being more queer- and female-friendly than most game developers — a well-earned reputation, given its history of including relatively diverse romance options in its games for years — closer inspection suggests that Mass Effect: Andromeda's romances were still made primarily with straight men in mind.

This is evident when you actually take a look at the sex scenes themselves and the level of nudity they're willing to show. (Note: The following paragraph contains links to some NSFW content, obviously.)

Three of the straight sex scenes — like the one between Cora and Scott — have explicit nudity. And one lesbian sex scene — the one between Peebee and Sara — has explicit nudity, too. (This is probably mostly because BioWare just swapped Scott for Sara. The romance scenes involving Peebee are identical no matter which version of Ryder you play.)

But the ones between two men? Both male-male romance scenes — those with Gil and Reyes — just show some passionate kissing with a tasteful PG-rated fade to black.

This discrepancy seems to be yet another example of "the male gaze," a term coined in 1973 by film scholar Laura Mulvey that describes the subtle ways our entertainment assumes its consumers are straight men — making the camera linger over a woman's nude breasts, for example. In the case of Mass Effect: Andromeda, this seems to manifest in the relative lack of male-male romances and in the ways its more explicit romance scenes are actually animated.

To be absolutely fair here, there are several straight and lesbian romance scenes in Mass Effect: Andromeda that don't contain nudity and use the same fade-to-black trick — like those with Avela, Suvi and Vetra. However, the sex scenes with explicit nudity — those with Peebee, Cora and Jaal — include every single coupling combination except for male-male.

To me, the ready availability of female-female romances in Mass Effect alone is not evidence that BioWare is going out of its way to cater exclusively to LGBTQ players interested in seeing those romances represented. In fact, the discrepancy in the quantity of male-male and female-female romances — and the nudity its romance scenes show — indicates exactly the opposite.