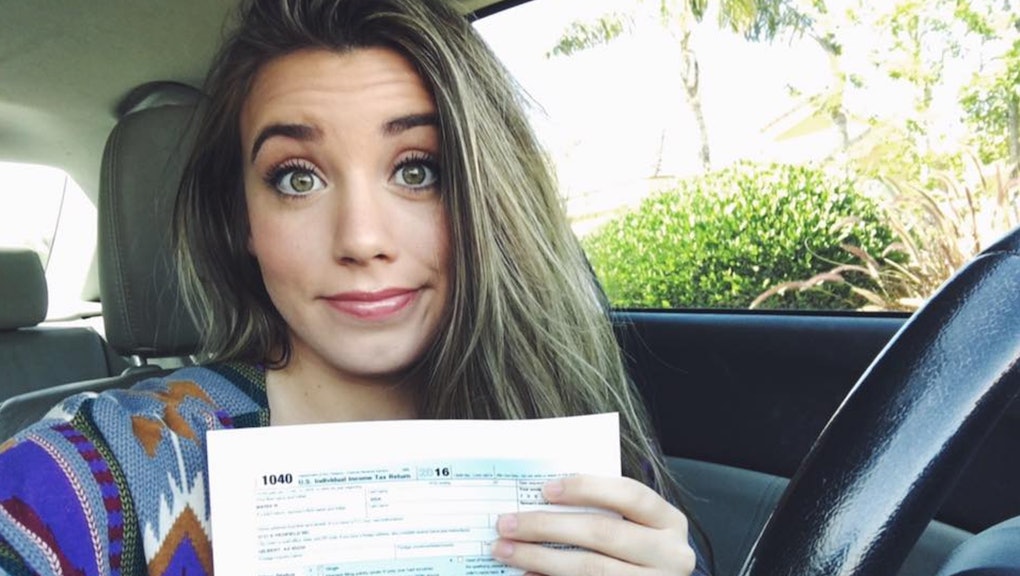 As they say, nothing in life is certain but death and taxes — yes, even if you're undocumented.

"I cannot receive financial aid from the state or federal government for school, I cannot benefit from unemployment, a reduced health care plan or a retirement fund," Sisa wrote. "Wanna tell me again how I should be deported, contribute nothing and only leech off this country while the 1% wealthiest people in this country steal from you every day?"

She added, "How about you show me yours, Donald J. Trump?"

According to the Arizona Republic, Sisa, 23, is a DACA recipient whose parents came to the United States from Argentina when she was only 6 years old. Under DACA, Sisa gets federal work permits, a Social Security number and a driver's license, but no pathway to citizenship. Though DACA recipients are supposed to be reprieved from deportation, reports have already surfaced of many DACA recipients being detained.

Sisa told the Republic that she hoped her post would help educate those who don't know the reality about undocumented people paying taxes.

"I was hoping to kind of make a statement and educate people," Sisa told the Republic. "What you've known all this time isn't the truth."

Sisa's selfie has garnered quite the reaction. Since posting the snap on Sunday, it's been shared over 5,000 times and received over 8,000 likes.

People praised the post and the message. And while the post did garner some haters who told her to get out of the U.S., plenty of people in the comments fought back against them, as well.

Aside from the positive feedback on the post, Belén also posted screenshots of people who contacted her saying that they had reported her to Immigrations and Customs Enforcement or other government agencies asking her to be deported.

A spokeswoman for ICE told the Republic that the agency "does not speculate" on alleged tips.

"It makes me feel a little sad, to be honest, that for showing and educating and basically doing the right thing, I am being hated on so much," Sisa told the Republic.

One person who attacked Sisa, Katharine Bethel, told the public that she'd messaged her without understanding that Sisa was brought to the country when she was only 6 years old.

"Do I regret what I said? In certain aspects, I do," Bethel told The Republic. "I wish there had been more information, because my response would have been different."

She added, "My response would have been, 'I think it's really awesome you're willing to share your story and work for other people.'"

Bethel, who voted for Donald Trump, said she was unaware that DACA existed and that Trump could get rid of it.

"If he does, I think that's very sad, because there are children and people who can't help the fact that they're here," Bethel said.

Bethel is not alone in misunderstanding how much undocumented Americans contribute to the U.S. economy. Despite rhetoric to the contrary, immigrants don't compete with American workers for jobs, and they contribute more to the economy than they take. And, according to PolitiFact, they pay about $12 billion in taxes every year.