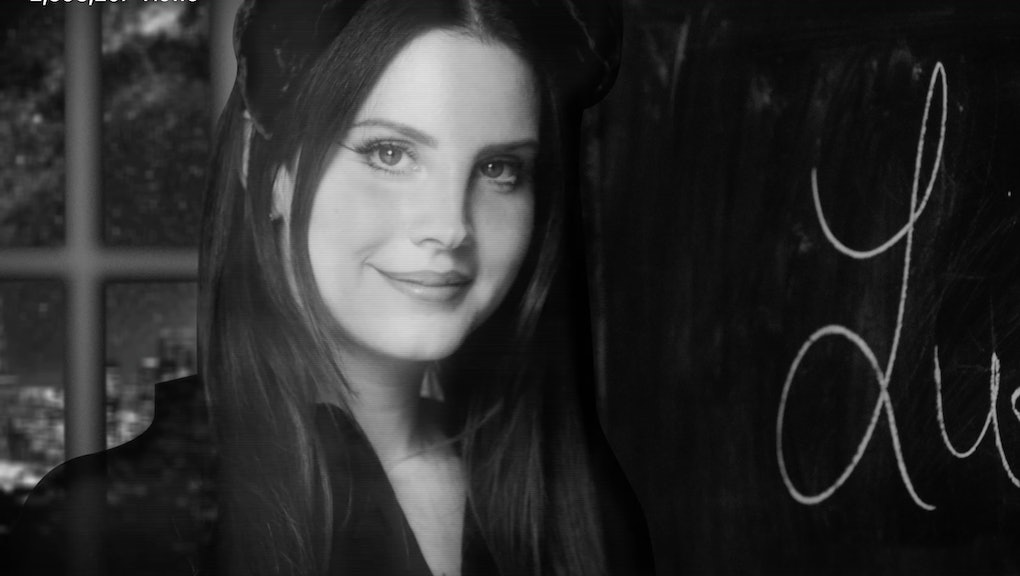 Lana Del Rey 'Lust for Life': How she got here, and why it's where we need her to be

We're just three months into 2017 and already everything is backwards. Drake, previously rap's saddest son, has put out the grooviest, most uplifting record of the year thus far; Calvin Harris has somehow become the artist to watch; and Lana Del Rey is feeling cheerful and optimistic?

Hollywood's formerly brooding femme fatale, Lana Del Rey, released a trailer for her long-awaited upcoming album, Lust for Life, Wednesday afternoon, sporting an unrecognizable warmth in her voice: "What shall I cook up for the kids today?" she muses. "Something with a little spice? Something with a little bitterness but is ultimately sweet? Or shall I take the day off and turn down the fire, and just take a moment to send my love to them over the ether?'"

She conjures a little string of floating icons — an XO (a little nod to her coming Weeknd collaboration), a galaxy, a whisk — like she's hosting the most haunting children's educational show imaginable. The spot is cute and fun, and drastically more chipper than just about anything she's attempted before, and thank God, because life is brutal enough right now.

Finding a Lust for Life

Lana Del Rey's career has persisted squarely in Hollywood's tangle of glitz, glamour and drama, though the stories she's told have in large part leaned toward the tragic. Glorifying abusive relationships, winding out breathy poetry about her bitter, tortured relationships with con men, liars and brutes.

She wound the classic femme fatale tropes around her head like a flower crown. "He used to call me DN," she sings on 2014's "Ultraviolence." "That stood for Deadly Nightshade/ Cause I was filled with poison/ But blessed with beauty and rage."

2015's Honeymoon saw Lana plunging into even more disturbing, apocalyptic depths of her Southern California goth. "Because I'm going deeper and deeper," she sings on "The Blackest Day." "Harder and harder/ Getting darker and darker/ Looking for love/ In all the wrong places." The album's more playful moments, the woozy revenge fantasy of "High by the Beach" for one, still could not shed enough of their inherent cruelty to feel all that uplifting.

"Peace by vengeance/ brings the end," she sings in the outro.

On her latest single, "Love," the darkness — which before seemed to either accept passively or let seep out from within her heart like lava — now comes from outside. "Seen so much, you could get the blues, but/ That don't mean that you should abuse it," the second verse reads. It's hard to square with her past releases, except to assume we're finally reaching the cathartic end of a very long and trying internal conflict. That, or there are bigger problems to deal with.

Earlier this year, Lana Del Rey announced her intention to lead a nationwide occult ritual intending to remove Donald Trump from office. The connection isn't made explicit in the trailer, but it's safe to assume he is the first cause of the "tumultuous period," the "dark time" Del Rey details throughout the trailer. The enemy is without and love is the weapon we'll need to defeat him.

Del Rey is not alone in this mission. "I truly believe in the necessity of cathartic pop records in times like these," Lorde tweeted in January, in a near mirror of the sentiments Del Rey's Lust for Life addresses. Gorillaz' highly anticipated Humanz is set to be an explicit exploration of the "dark fantasy" that is the Trump era, one that will likely end with the uplifting "We Got the Power," featuring Savages' Jehnny Beth, with the encouraging chorus: "We got the power to be loving each other/ No matter what happens." Meanwhile, Drake wants More Life, less tragedy for his audience.

Rather than dwell in the mirror of darkness, the bulk of pop's fringe characters who have long walked the boundary between the brutal and the serene have chosen to lead their listeners to the light. It feels right. It feels necessary. Few have looked as deep into the void as Lana Del Rey, which makes the lifeline she's currently extending feel that much more intriguing and important.

Del Rey and the rest of the music world couldn't stop Donald Trump, but they may just make it tolerable to live in his world for as long as we have to.