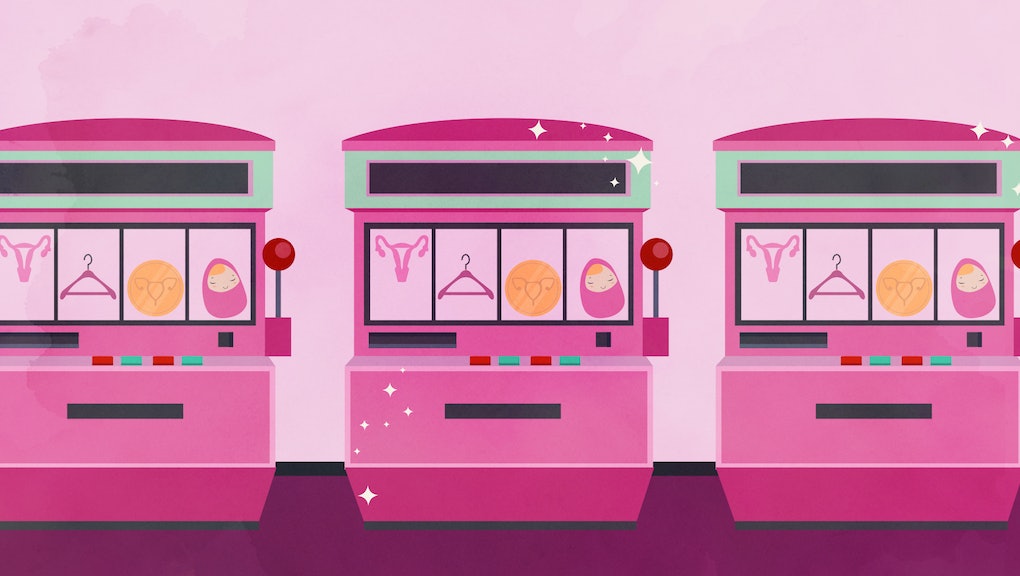 Some women rely on "luck" to fund their abortions. In Trump's America, it could get worse.

Once upon a time, a woman found a gold coin she exchanged for an abortion.

The woman was Codie Pete, a then-25-year-old living in a rural part of New Mexico, where the nearest abortion clinic was an hour and a half away from home.

At the time, Pete was making meager wages as a teacher and couldn't afford health insurance through her employer, which put birth control out of reach, too. So when she unexpectedly became pregnant, she found herself in a tough predicament: The financial straits that left her unable to prevent the pregnancy were the same ones that would stop her from terminating it.

"When the clinic told me over the phone that, even using a sliding scale for my income, the procedure would cost $600, I was floored," Pete recalled. "I remember being on the phone saying, 'What do people do if they can't come up with the $600?' They couldn't answer me. At that point I just got off the phone. I didn't even tell them to schedule me."

As Pete contemplated which of her belongings — her car? her couch? — she could sell to pay for the procedure, she thought back to, of all things, gold coins her mother had bought Pete and her sister when they were children. By some stroke of fate, her mother confirmed it: Years later, the coins were still in her dad's office safe. A week later, Pete sold hers for almost exactly $600.

"My abortion story is about this magical coin that just sort of appeared — it was the pot-of-gold or shamrock kind of luck," Pete said. "That's what's terrifying, though. Women's choice is restricted by our ability to pay for a procedure."

Pete's predicament might sound far-fetched, but it's not uncommon. The last few years have seen drastic cutbacks to reproductive health care access. With plans to defund abortion clinics and cut Medicaid coverage, President Donald Trump's administration is slated to drastically reduce the number of individuals who can afford safe abortions.

There's no understating the effects of those cuts: Some 75% of Planned Parenthood's patients are "at or below" 150% of the federal poverty level. As the number of clinics offering abortion services dwindle, many patients have to travel farther to get to one. The money spent on transportation and hotels, as well as lost wages if patients must take days off from work to get the procedure, all add up to put abortion financially out of reach for many people.

Meanwhile, in states where it's legal for Medicaid to cover abortion services, 89% of abortion patients with Medicaid use their insurance to pay for their care.

While the failure of the Republican health care plan was a significant victory for reproductive rights advocates, state legislators continue to propose abortion restrictions meant to chip away at Roe v. Wade.

And as they do, many more people will have to rely on luck to get the care they need.

The actual cost of an abortion

There's a lot of discussion about the legislation preventing people from effectively accessing reproductive health care, but rarely do we talk about how it can also be cost-prohibitive — a barrier that spans from states red to blue.

According to Planned Parenthood, an in-clinic, first-trimester abortion procedure can cost as much as $1,500. For patients who can't get financial assistance through insurance or Medicaid, the median out-of-pocket cost for an abortion is $575. For more than half of those patients, the $575 amounted to roughly one-third of their monthly income, according to a 2014 study.

These costs skyrocket the longer a pregnant person waits to undergo the procedure. The cruel twist? About 60% of U.S. women live in states that require them to wait — anywhere from 24 to 72 hours — between their initial consultation and their appointment for the actual abortion.

Dr. Sarah Roberts, an associate professor at the research group Advancing New Standards in Reproductive Health and one of the 2014 study's authors, said such laws mean pregnant people often find themselves caught in a tough situation.

"The vast majority of women who want an abortion are very determined to get one and will get one regardless of the barriers," Roberts said. "But funding is one of those barriers that's more difficult for women to overcome."

For Shae Jackson, the only way out of her unintended pregnancy came in the form of her boyfriend's tuition refund check.

Jackson found out she was pregnant during her sophomore year of college, shortly after she'd gone off birth control due to a life-threatening blood clot. She said the decision to get an abortion was a no-brainer. "No matter how much it cost, [I knew I would] figure it out because I had to get the abortion," she said.

But Jackson wasn't sure how she could possibly come up with the $500 it would cost her at the nearest clinic. She and her boyfriend were both unemployed students with no income who couldn't come up with several hundred dollars on a whim.

Just when things began to look hopeless, an unexpected check arrived in the mail for her boyfriend. "It was divine intervention," Jackson said. "I found out I was pregnant in early March, and that was the exact same time the school issued his [tuition] refund check."

"When I tell my story, I say I was 'lucky' quite often because it certainly was a gift that [the check] came when it did — otherwise, I have no idea where I would've gotten those resources," she said.

There was certainly some amount of luck involved when Cecilia Graña-Rosa counted on friends to help come up with the money to fund an abortion for her friend, Julie*.

When Julie found out she was pregnant, she almost immediately informed the father, who offered to Venmo her $50 for an abortion.

"He thought it cost the same as Plan B," Graña-Rosa said.

The 23-year-old unemployed grad student knew she wanted an abortion the minute she found out she was pregnant. She'd collected five positive home-pregnancy tests in a plastic cup in her bathroom, Graña-Rosa said.

Despite living in a blue state, Julie had a difficult time asserting her right to an abortion. Before she was allowed to entertain the notion of going through with the procedure, she was required to endure multiple sonograms in two different family planning clinics, where staff encouraged Julie to continue with her pregnancy. She paid for these out of pocket because she feared her parents, who oppose abortion, would notice her insurance claims.

"He thought it cost the same as Plan B."

As she watched her friend's medical bills pile up, Graña-Rosa had an epiphany: She would turn a party she was planning to host into a fundraiser. As a former student at Vassar College, she said she saw it as both an opportunity to help a friend in need and to see whether her pro-abortion-rights friends from the liberal arts school would "put their money where their mouth is."

So, in February 2016, Graña-Rosa made a Facebook event titled "The good ol' 'raising money for my friend's abortion' pregame fundraiser." While the concept may seem crass or insensitive, Graña-Rosa isn't the first to think of crowdfunding an abortion.

A GoFundMe search for "abortion" results in such campaigns as "My 15-year-old sister needs an abortion" or "Emergency abortion." These represent people in situations so dire that they're looking for financial assistance not from friends, but from perfect strangers. Bailey, a then-23-year-old from Illinois, was among the first to use the platform to crowdfund an abortion when she launched a campaign called "Stop Bailey From Breeding Fund" in 2014.

GoFundMe temporarily removed Bailey's campaign page, and decided a week later to ban all abortion-related content from appearing on the site. A spokesperson told Mic the site has since changed its policies to allow users to crowdfund all kinds of legal medical procedures, including abortion.

Through Graña-Rosa's own IRL crowdfunding, she was able to raise $350. But before she could give her friend the money, Julie — uncertain if she'd ever be able to afford the procedure — induced a miscarriage with vitamin C pills. With no abortion to fund, she ended up using the $350 to pay for the sonograms the family planning clinics had required her to have.

That Julie escaped from the situation without any major health complications is, as Graña-Rosa said, "lucky." Self-induced or so-called "back-alley" abortions are extremely dangerous. Some 68,000 women worldwide die of unsafe abortions every year, placing it among one of the leading causes of maternal death.

Roberts, the associate professor from ANSIRH, said this sort of "luck" can easily run out for many people who become pregnant and don't want to be.

"These are women who were able to figure it out and pull [the money] together," Roberts said. There are other women for whom that's not the case."

*Name has been changed to allow source to speak freely on sensitive topics.