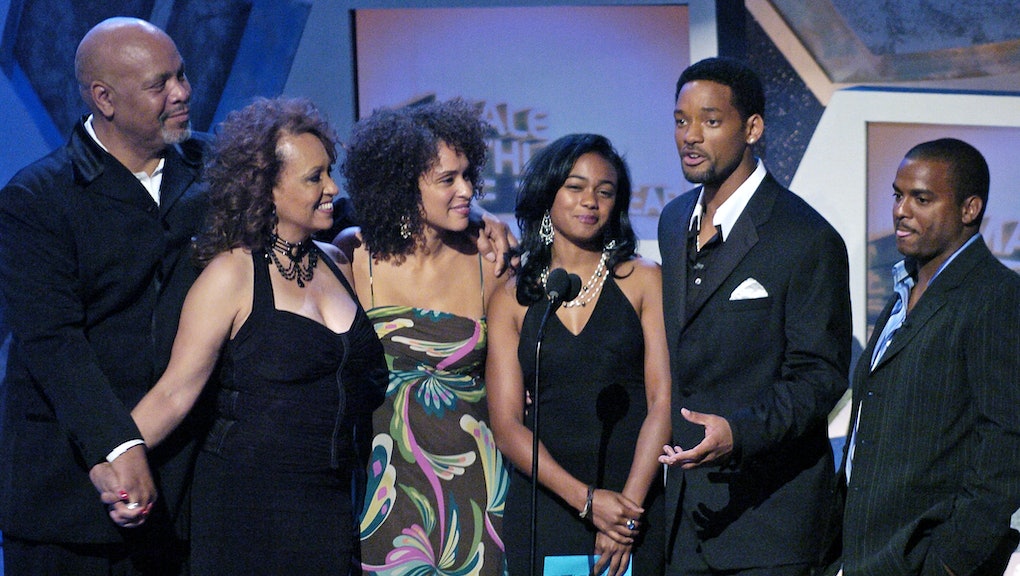 It doesn't look like this decades-long feud will ever end. Janet Hubert, famously known as the "first Aunt Viv" on the the popular 90s sitcom The Fresh Prince of Bel-Air, has had a beef with the show's star Will Smith for almost 25 years. In 1993, after Fresh Prince's third season, Daphne Maxwell Reid was recast as the matriarch of the Banks family. Since the messy parting of ways, Hubert has not been silent about her disapproval of Smith and her treatment on the show.

This week, Alfonso Ribeiro, aka Carlton Banks, and Smith posted reunion photos of the cast to Instagram. After being asked about the image, Hubert expressed harsh feelings in a deleted Facebook post: "There will never be a true reunion of the Fresh Prince. I have no interest in seeing any of these people." For those wondering why Hubert feels a way, here's a timeline of the actress' beef with the Fresh Prince of Bel-Air.

After Hubert's removal from the show, Will Smith told Atlanta's WVEE-FM radio station in July 1993, via ABC News, he had nothing to do with Hubert's departure.

"I can say straight up that Janet Hubert wanted the show to be 'The Aunt Viv of Bel-Air' show because I know she is going to dog me in the press," Smith said.

"She has basically gone from a quarter of a million dollars a year to nothing," he added. "She's mad now but she's been mad all along. She said once, 'I've been in the business for 10 years and this snotty-nosed punk comes along and gets a show.' No matter what, to her I'm just the Antichrist."

Hubert expressed being hurt by the fact her contract had not been renewed after the success of Fresh Prince. She told the Los Angeles Times in an August 1993 story: "I was hurt and disappointed. I'd worked hard and I never saw that coming."

Hurbert wrote about her experiences on the Fresh Prince of Bel-Air in a tell-all memoir called Perfection Is Not a Sitcom Mom. She also dished more details to the site BVonBooks.com, which is now part of Huffington Post's Black Voices, about the fallout.

My departure was planned for a long time. .. There will never be a reunion of the 'Fresh Prince.' Will Smith and Alfonso destroyed a 20-year career with untruths. I got slammed. Will apologized later in an 'Essence Magazine' article, but it still lingers. It's still there.

Tatyana Ali, who played Ashley Banks on the show, told Hip Hollywood she felt no bad blood with Hubert during her days on the Fresh Prince.

"No, I had a wonderful experience. It changed my life in a very positive way. I was also very young when it was all going on."

After Will Smith posted a reunion photo of the cast in November 2011, many noticed Aunt Viv was missing from it. Hubert told TMZ in December of that year she couldn't care less about not being invited. "There will never be a reunion ... as I will never do anything with an asshole like Will Smith," Hubert said.

Janet began to show a change of heart in 2013. She told the Grio she would "absolutely" be open to a reunion with the show's cast. "Even Daphne (Reid)," she added.

I would say to him [Smith], we need to heal this. You've done some things, you've said some things, that were totally untrue and you know that they were untrue. I've said some things that I probably should have never said. But you've never heard them come from my mouth. Especially the TMZ thing last Christmas; my Mom passed away. So there I was again in the media getting beaten up ... and you get tired. I'm tired. Aren't you tired Will?

Again Hubert spoke more on her supposed mistreatment on the show in an interview with Omg! Insider.

"The world has let me know that my place on that show was very, very, very loved. Because I felt demonized and beaten up and crucified for so many years. No one came forward in my defense. No one," she said.

She also called out Ribiero for speaking ill of her.

"It was if to say, you don't reprimand the young man on the set. I had an expression: 'If you want me to kiss your butt, you have got to put it in my contract.' He did some heinous horrible things to me. They were like bad kids. Will and Alfonso, especially Alfonso."

She continued, "He said I was crazy and nobody wanted to go to lunch with me."

But by the end of the interview, Hubert said she still had interest in making amends.

"We need to have a reunion, we have to end this horrible, 21-year war." She continued, "I think we all owe each other an apology."

After James Avery, who played beloved father Philip Banks on Fresh Prince, died in 2014, the actress remembered her former TV husband in a statement to the Grio.

Acting with James was like a great doubles match! He was one of the best actors I have worked with in my many years. He was like a big strong boulder, that could either crush you or shield you. He was first and foremost an actor, classically trained, climbed that ladder step by step, role by role, to become one of the most powerful TV dads that had ever been created.

After calling for peace in years prior, Hubert began to take jabs at Smith again following Jada Pinkett Smith's announcement she would be boycotting the Oscars after black actors were not given nominations for a second consecutive year. In a new video, Hubert took shots at both Smith and Pinkett Smith:

She continued to express her distaste for Smith's acting in the film Concussion, in which he plays a Nigerian-American doctor.

"Maybe you didn't deserve a nomination. I didn't think frankly you deserved a Golden Globe nomination with that accent."

Hubert went back to the media to explain her side of the story again following her viral video. Here's an excerpt from her interview with the Real last year in which she described trying to reach out to Smith and his manager James Lassiter.

I went back to them in 2009 I and said, 'Please, I need you to clear my name.' I spoke to J.L. when my dad died and my brother died, and I begged them. I said, 'I have a family. I need you to tell the world that this stuff didn't happen.' And I was waiting in my heart, thinking somebody would come to me one day and help me, but they didn't. Because I had been trained as a young woman, you always have you dignity ... but I realized that redemption was not gonna come unless I did it myself.

But while visiting BBC Radio 1Xtra the same month, Smith had nothing but good things to say about Hubert.

I think she's brilliant. I think as an artist, there's so many things that she does: She sings, she dances, she's like a really powerful artist. So I loved what she brought to The Fresh Prince.

On Tuesday, Ribiero posted this photo of the cast, and there was no sight of Hubert again. She then replied with the following in a deleted Facebook post.

Hubert then took another hit at Ribiero on her Facebook page Thursday morning and sent him a warning.

For those of you white and black women who don't know AR like I do ... this one's for you. Get a taste, next time choose your words more carefully when you come for me. I will meet you at the door ... my page ... my opinion. The fire you light may burn your own ass (ancient black proverb).

Ribiero himself has not responded to Hubert's comments.