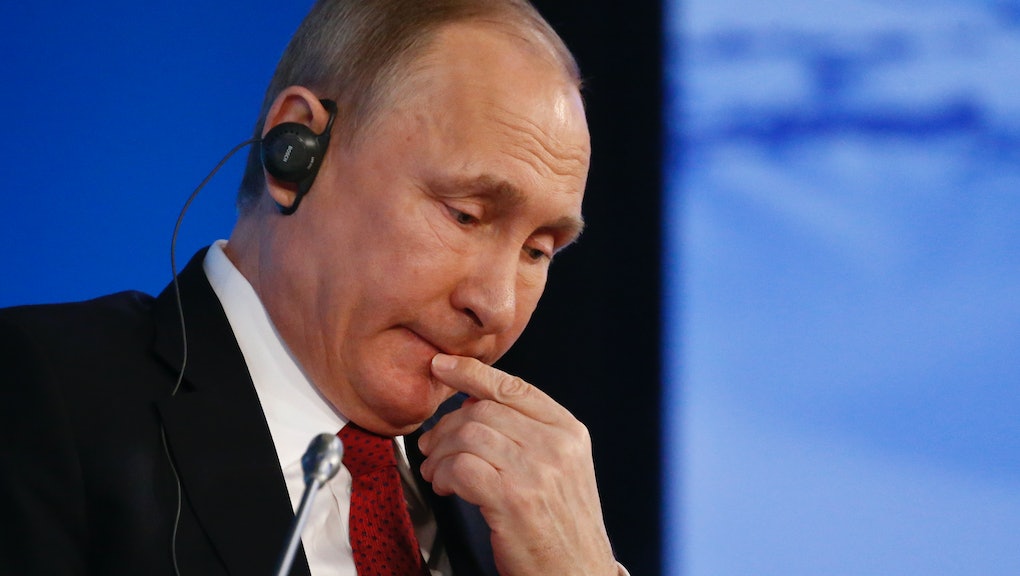 Putin denies Russia hacked the election — and then implies it did

Russian President Vladimir Putin emphatically denied having interfered with the 2016 U.S. presidential election in a televised panel in which he also appeared to betray a shoddy grip on recent American history.

While on stage at a CNBC-hosted event, the Russian president was asked directly whether he and the Russian government tried to influence the American election. He replied with a historical anecdote.

"Ronald Reagan once — debating about taxes and addressing the Americans — said,  'Watch my lips.' He said, 'No, watch my lips.'" Putin recounted according to CNBC's translation.

The quote that the Russian president was looking for was George H. W. Bush's infamous, "Read my lips: no new taxes." Bush offered the line at the 1988 Republican National Convention as he accepted his party's nomination for the presidency.

Putin not only flubbed the attribution of the famous American quote, he also seems to have missed the reason for its rise to infamy: Bush's anti-tax promise became immortalized in American history precisely because he did end up raising taxes during the 1990 budget battles, which some believe ultimately lead to his failure to win re-election.

As a former KGB agent who wasn't exactly steeped in late-1980s Americana, Putin can be forgiven for not fully understanding the meaning of the iconic phrase.

But as former Soviet leader Mikail Gorbachev once said, "Always Google your quotes to check for unintended irony."