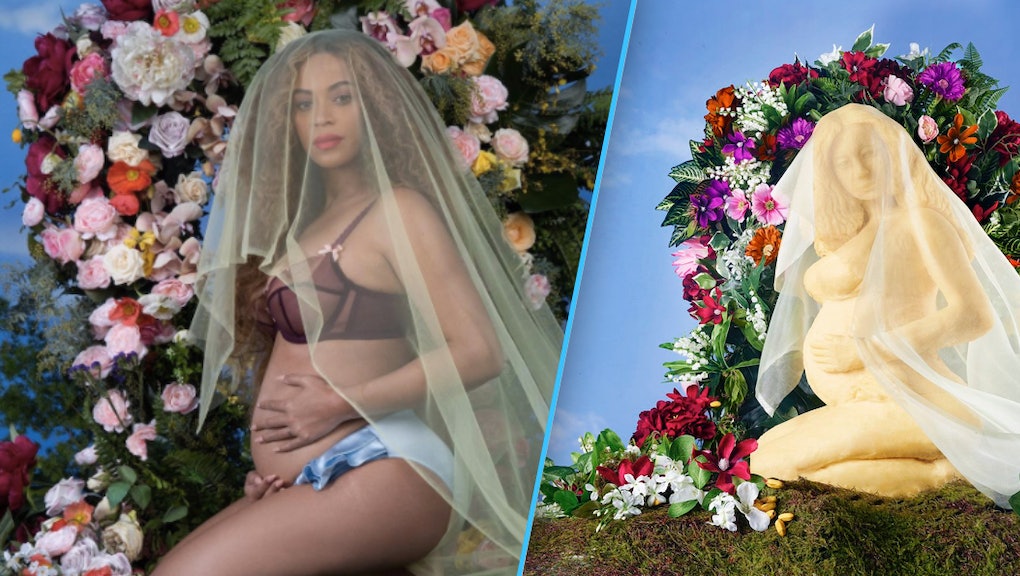 This week in un-brie-lievable news, a statue of pregnant Beyoncé made entirely of cheddar cheese is now a thing that actually exists. That's right, say halloumi to cheese-Beyoncé. It doesn't get cheddar than this.

The East Village Cheese and Wine Festival, a London food festival that will take place in the city's East Village neighborhood, commissioned the work ahead of its cheese carving competition Saturday. The statue is titled "Brie-oncé," the Telegraph reported on Thursday, even though it's actually carved from cheddar, not brie.

The statue was made by artist David Bradley, with help from food sculptor Jacqui Kelly and "food art experts" at the U.K.-based Robin Collective, which has done other wacky food projects in the past, including crafting edible coffee cups for KFC.

The Telegraph reported that  "Brie-oncé" took 28 hours to make and uses more than 40 pounds of cheddar cheese. The sculpture's look was, obviously, inspired by Beyoncé's iconic pregnancy announcement photo from February, which the star posted on Instagram to announce to the world that she is pregnant with twins.

Bradley, the lead genius behind the "Brie-oncé," will also compete in Saturday's cheese-carving competition, the Telegraph reported. He'll be going up against two other cheese sculptors to see who can craft the best, most dairy-ing piece of cheese art — although it's hard to imagine a cheese sculpture that's more gouda than this one.

Either way, festival organizers are seemingly hoping the likeness will drum up hype and get Londoners to manche-go to the event.