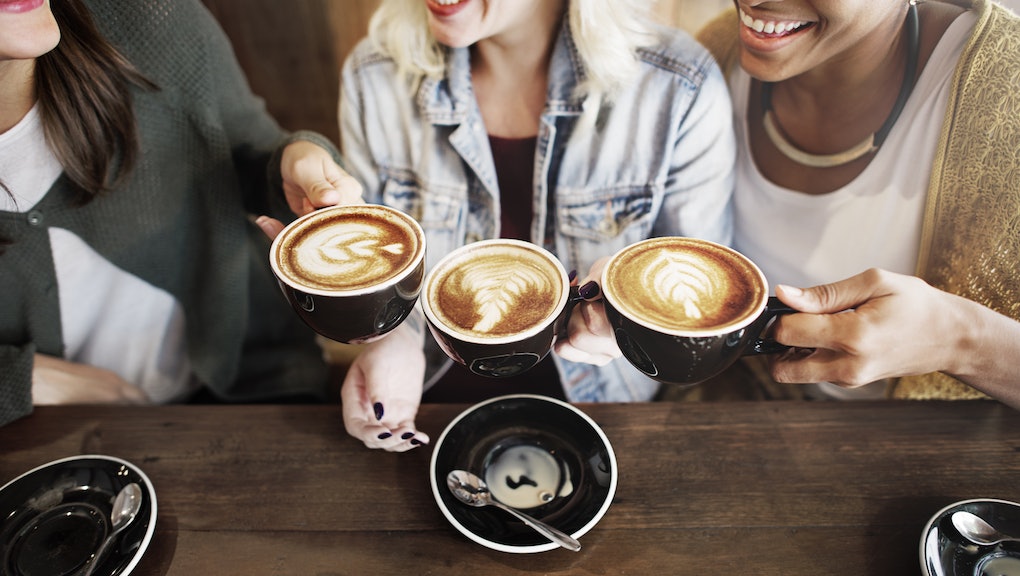 Coffee can energize our sleepiest mornings, sustain us during all-nighters, and help us through the dreaded afternoon slump. The invigorating beverage isn't classified as a drug — but caffeine is, and it's one hell of a stimulant that gives coffee its superpowers.

From coffee's ability to help you live longer to how it makes you smarter, these 12 facts about how coffee is good for you might just make you love java even more than you already do.

Coffee can help you see the positives.

Let's give it up for coffee's ability to help you identify the positive things! A small study found that, when tasked with identifying positive and negative words, study participants who took the equivalent of two to three cups of caffeine identified positive words and images faster than negative ones. Think of coffee as a silver bullet for optimism.

Coffee gives you an energy jolt in as little as 10 minutes.

Hello, instant energy. Studies show that caffeine from coffee hits the bloodstream in mere minutes, though it will take a bit longer to feel its full effect. You'll feel unstoppable (i.e. your most alert) roughly 30 to 45 minutes after downing your java, research suggests. Patience is a virtue, okay?

Coffee wakes up your mind and your bowels. Three out of every 10 people find that coffee has a laxative effect, and researchers have found that coffee gets the digestive system going by stimulating the "distal colon," the Washington Post noted. Decaf can still do the trick, too.

If you've got a long, monotonous drive ahead of you, you may want to down that caffeinated slurry at the highway rest stop. One study with 24 participants found that just one cup of coffee helped sleep-deprived drivers have better control of their vehicles and weave less frequently.

The smell of coffee can relax you.

Start feeling revived the moment you smell coffee brewing? It's not just in your head. One study on rats found that a whiff of hot coffee changed the proteins and genes in the animals' brains. Stressed rats exhibited more relaxed brains after smelling coffee compared to a control group of stressed rats that did not smell coffee.

Coffee helps you focus — even when you're sleep deprived.

You probably don't need us to tell you that the caffeinated drink wakes up your brain. But science confirms it does — by a long shot. One study found that 200 mg of caffeine (equivalent to about two cups of coffee that have 95 mg of caffeine each) helped sleep-deprived U.S. Navy SEALs have better memory and brain functioning.

Coffee won't magically give you extra IQ points. But the stimulant can make help your brain be more efficient with its resources it, CNN reported.

"When you're sleep-deprived and you take caffeine pretty much anything you measure will improve: reaction time, vigilance, attention, logical reasoning — most of the complex functions you associate with intelligence," Harris Lieberman, a research psychologist at the Military Nutrition Division of the U.S. Army Research Institute of Environmental Medicine, told CNN. "And most Americans are sleep-deprived most of the time." Guilty as charged...

Coffee can help you live longer.

We'll all die one day,  but studies show a daily coffee habit is linked to a longer life. You can't achieve mortality with a macchiato but then again, can't hurt to try... if you're into not dying.

It cuts your risk for Type 2 diabetes.

Both Type 1 and Type 2 diabetes are serious diseases that change how your body processes glucose (blood sugar) and negatively impact life expectancy. Researchers found that drinking two cups of coffee a day was associated with a 12% decreased risk for developing Type 2 diabetes.

Coffee protects your brain from aging.

To stave off conditions like Alzheimers and dementia, drinking some extra cups of joe might help. One study found that middle-aged people who drank three or more cups of coffee a day had a decreased risk for developing dementia later in life.

Coffee makes you a better athlete.

Trying to go HAM during your next gym sesh? Pre-game your workout with coffee and you'll perform better.  Science says the caffeine in coffee can increase endurance. Now run, Forest, run [to the closest coffee shop].