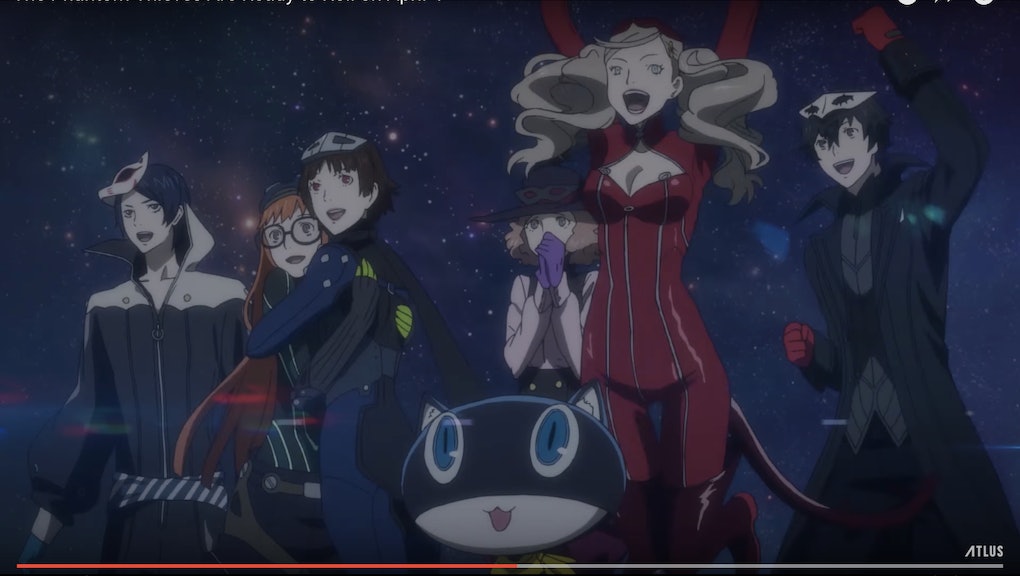 We're still a little under a week away from Persona 5's April 4 release date, but reviews are coming in strong. The verdict: It's a fitting successor to 2008's Persona 4 and a very good game overall.

To help you get a better sense of whether or not you should take the plunge and buy Atlus' new 100+-hour JRPG/hot high schooler simulator, we've synthesized prerelease reviews from IGN, Polygon and Kotaku in order to give you the best overall picture of what you're getting into with the latest installment.

Persona 5 reviews: A vibrant, stylish ride that doesn't slow down

In his review for IGN, Andrew Goldfarb praised Persona 5's style, specifically its depiction of Tokyo, where the protagonist ends up shortly after beginning the game:

Aside from the dozens of activities available, the very act of exploring Persona 5's Tokyo is a delight. From city lights at night to crowded subways during your school commute, every part of this world is bursting with vibrant color, and every detail feels meticulously thought out and eerily accurate to real-world Tokyo. The anime-like art style is complemented by full animated cutscenes that are absolutely gorgeous and help to punctuate major story events.

Goldfarb even reported the menus were attractive enough to make him just absently click through them, and stated that the game's style oozed out of every pore:

All of this is further enhanced by Persona 5's impressive sense of style. I found myself flicking back and forth in menus over and over simply to appreciate the slick transitions. Sharp design choices permeate even tiny details of gameplay, like scene changes that vary based upon your mode of transportation as you leave each area, or a free-flowing results screen after victory in battle.

Polygon's Philip Kollar also offered glowing praise for the game's dungeons, which he saw to be a pretty direct improvement over Persona 4's:

Those dungeons are excellent, by the way, and by far the biggest single point of improvement between Persona 5 and its predecessors. Rather than the randomized dungeons of past games, each "Palace" in the Metaverse is a meticulously designed setpiece, a series of challenges ranging from stealth to puzzles to just plain combat. Exploring dungeons was often one of the most boring parts of past Persona games; now it's a delight that constantly pushed me into new ways of playing.

Over at Kotaku, Kirk Hamilton was probably the most unabashed about his love of the game's style, praising the seamless melding of its soundtrack and visuals:

Persona 5 is one of the most stylish video games I've ever played. It restlessly pulses toward the corners of your TV screen, as if unable to contain its overabundance of verve. This game doesn't run, it bounces, helped along by a giddy and unusually cohesive audio-visual aesthetic.

Overall, the reviews indicate that Persona 5 is an audiovisual feast for the senses, and that's not even getting into the gameplay.

Kollar, in his review for Polygon, praised the game's battle system, which he said was much faster and more fun to watch than that of the average JRPG:

Persona 5's battle system deserves some praise as well. In addition to being flashy and fun to watch — a necessity given the 100-plus hours the game takes to complete — combat is also much faster than in the average turn-based RPG. If you know what you're doing and don't mind fast-forwarding through the repetitive battle dialogue, the average fight can take less than a minute.

More importantly, Kollar noted, the battles made him feel cool, which was really a feat for a turn-based RPG:

It's rare for an RPG, of all things, to make me feel cool. But when I pulled off the rock-paper-scissors-style combos in Persona 5, knocked enemies out of the air and sent my whole party into an all-out attack, I felt like pulling out a pair of sunglasses and slamming them on my face while mimicking my character's victory pose. It feels good.

Whether or not the combat will make you want to break out into cool poses upon beating up on enemies, a lot of gameplay praise was also heaped on Persona 5's new "confidant system," where you've got to budget your time during the day in order to get to know people around Tokyo.

Hamilton in particular was incredibly impressed by how much fun he had negotiating his in-game social calendar, which could have very easily turned into a tedious chore:

Much of Persona 5 comes down to efficient schedule management. (It's more exciting than it sounds.) You attend classes by day, then after school you make a choice: do you go to your job at the flower shop, or do you head into an alternate dimension and do battle? Or maybe you just want to hang out with that cute fortune-teller girl you met in the seedy part of town? Which activity will yield the greatest dividends, and which will feel like a waste of time?

In addition to the stat boosts and boons increasing your connection with your confidants gives you, Andrew Goldfarb commented that each decision you make feels meticulous and weighty because of the game's built-in time limit:

By offering so many options and only a finite amount of free time, Persona 5 gives every decision a fantastic amount of weight. Choosing to work part-time might give you extra cash to buy better weapons, but it comes at the cost of ranking up a Confidant or increasing your stats. Spending time with a specific Confidant might help you learn a skill that fits your play style, but it means sacrificing learning more about a different character whose story you might be more interested in. Maximizing the skill you've been grinding away at or finishing a side story after multiple in-game months of watching it progress are tremendously rewarding experiences, and even lamenting the opportunities you missed adds a unique layer of replayability that makes starting a New Game+ all the more enticing.

Although reviewers found the connections you could make in Persona 5 somewhat less resonant than they were in Persona 4, the added wrinkle of getting unique combat benefits from pursuing different confidants gave the game a distinctly different sense of measurement, according to Kollar.

Persona 5 reviews: Clunky dialogue and an over-reliance on tropes

Hamilton, though full of praise for the game's story and socially conscious narrative, said that he wished the game had been less reliant on tropes for its story, including characters who felt like an unnecessary retread of previous Persona games:

As much as I liked Persona 5's story and characters, I would have preferred that it adhered less slavishly to established tropes: JRPG tropes, heist movie tropes, and most of all Persona tropes. I found the new cast members, likable though they may be, to be overly familiar archetypes too obviously lifted from previous Persona games.

AV Club's Clayton Purdom was similarly glowing about the game's story, but stressed that the localization sometimes led to some wonky moments that took him out of the overall narrative experience:

As for the writing itself...I'll say the jury is still out. Aspects of its translation seem slightly less nuanced. I'm not sure anyone there actually knew what the word "cognition" meant, and some of the banter and insults lack the sharp snap of its predecessor ("Are you hallucinating from an overdose?" one character yelps, apparently in lieu of the more common "Are you high?").

Kollar, however, praised the game's willingness to engage with a more socially conscious narrative:

But what surprised me about Persona 5 — what sets it apart from its predecessors — is just how much it has to say. Persona 5 is a game about rebellion, politics and enacting social change — and it's not afraid to be brash and outspokenly stylish while addressing those concerns.

He went on to explain in more detail a little further down about how the game's narrative is now more resonant than ever for younger generations, and praised the game's unwillingness to lapse into irony and "edgelord" darkness that would probably infect a lesser game about supernatural high school thieves changing the hearts of corrupt adults:

To be more specific still: Persona 5 is a game about how shitty most adults are, how they've robbed the younger generation of a future in numerous awful ways, and how it's up to that younger generation to step up, push back and force a change. Persona 5 also refuses to bend to irony, and despite — or perhaps because of — this overwhelming sincerity, it makes some smart and effective observations about society, what drives people to change and what allows them to refuse change even when it would almost certainly be for the better.

If the game's runtime of 100+ hours is to be believed, it's probably for the best that the game's narrative strays away from dismal doom-and-gloom and manages to, by almost all review accounts, be really funny and heartfelt. Persona has never shied away from dealing with complex social issues, save same-sex relationships apparently, which Kollar gives a healthy sidebar to in his review.

Persona 5 will be released stateside on April 4, 2017. In the meantime, you can check out tons of media (including character videos and trailers) on the (extremely stylish) Persona 5 site.