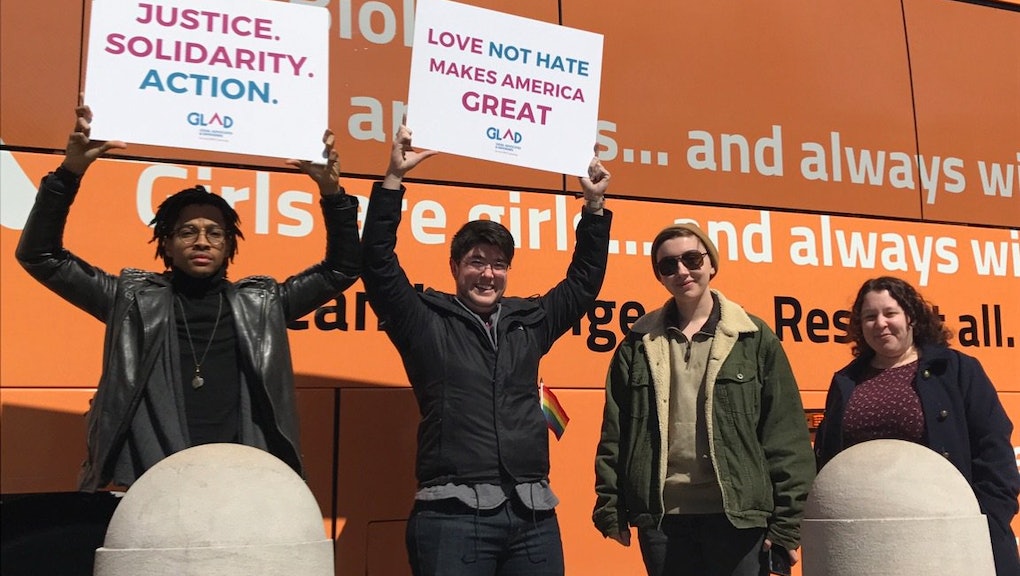 The anti-trans, self-branded "Free Speech" bus is still rolling through the country, spreading its hateful message that transgender people don't exist — but when it arrived in Boston Thursday morning, protesters were there to greet it.

The big orange bus — adorned on the side with the slogan "It's biology: Boys are boys and always will be. Girls are girls and always will be" — is a collaboration between conservative groups the National Organization for Marriage, the International Organization for the Family and CitizenGo. It's currently on an East Coast tour spreading its anti-trans message from New York through New England and then down to Washington, D.C.

Tweets from Thursday morning showed the bus in Boston, stopped right outside the Massachusetts Statehouse.

Protesters gathered around the bus with messages promoting acceptance and equality for LGBTQ people. Mason Dunn, executive director of the Massachusetts Transgender Political Coalition, was one of the people who came out to meet the anti-trans bus in Boston on Thursday.

Dunn noted that recent numbers from the Boston Police Department indicate that LGBTQ people are the most frequently reported targets of "hateful acts" in the city, and that trend appears to be on the rise, as the Boston Globe reported in March.

But Dunn said that while the bus was there to spread hateful rhetoric, the protesters' messages were the opposite. "What I saw from trans community members near the bus were really messages of 'We are here, we deserve respect,'" Dunn said. "We were chanting about love and acceptance."

Janson Wu, the executive director of GLBTQ Legal Advocates & Defenders, also met the bus when it arrived in Boston on Thursday, along with other GLAD staffers. "It was important for us to show up because trans people are part of every community in the country," Wu said in a phone call on Thursday. "Here in Massachusetts, trans people are welcome."

Wu said protesters tried "to cover up the side of the bus" with messages of "inclusion and love for transgender people."

The bus reportedly continued on to other stops in the Boston area after it left Back Bay on Thursday — according to the Boston Globe, its next stop was the campus of Harvard University.

This isn't the first time the "free speech bus" encountered resistance to its message of trans erasure. Last week in New York City, activists scratched the side of the bus, cracked its windows and spray-painted messages like "Trans Rights Now" and "Trans Liberation" on the side, USA Today reported.