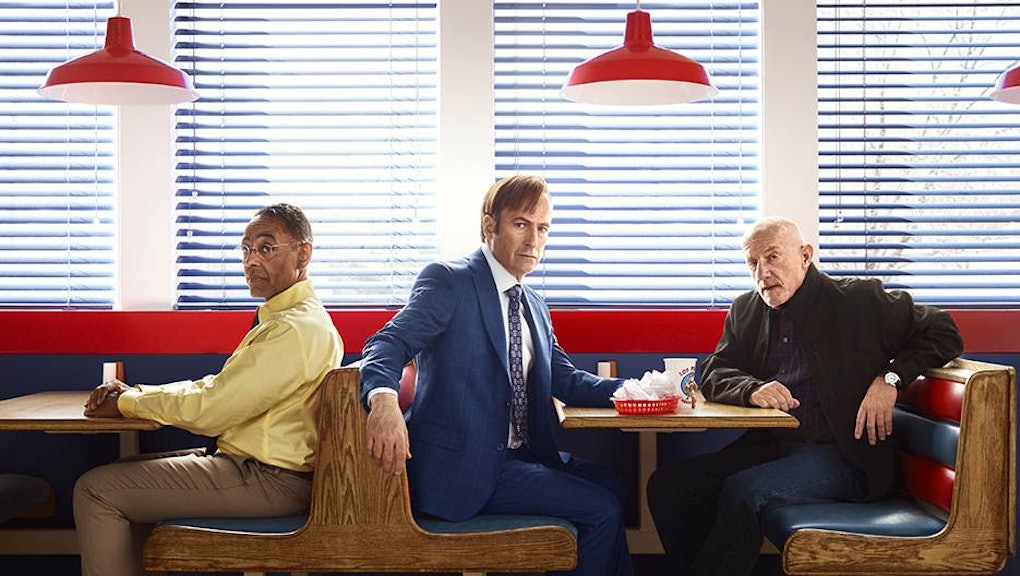 It's both a strength and a weakness to craft a TV show or film in the form of a prequel. While there's a rich history to build on, there's the added consequence of the viewer knowing how certain threads will end — and when you can't execute them correctly, you're sure as hell going to be called out for it. Let us fondly recall Anakin Skywalker's  abrupt romance with Padme in the Star Wars prequels, which was predestined to be awkwardly woven together with their unnecessarily huge age disparity.

Thus far, AMC's Breaking Bad prequel series Better Call Saul has lived up to the billing. It's not the pulse-pounding, body count-stacking television of its predecessor — in fact, it's a slow, slow-burn drama. This has worked to its advantage over the first two seasons, which gradually built on the ethos of Saul Goodman (still going by his actual name, Jimmy McGill) and Mike Ehrmantraut before they — forgive me — truly broke bad.

Their stories haven't always been synchronous on Better Call Saul — Jimmy McGill's story is essentially a crooked legal drama, while Mike is in Diet Breaking Bad. Entering season three, however, fans get their best look yet at just how Jimmy and Mike could be thrust into their respective Breaking Bad starting positions, thanks to some familiar faces from the flagship series. It's all thrilling stuff.

The new season of Better Call Saul begins immediately where season two left off. Jimmy's brother Chuck has recorded him confessing to a felony in Chuck's dropped Mesa Verde case, and has locked away the tape in one of the drawers of his desk. At first, Jimmy isn't cognizant of Chuck's deception, but the tension between the McGill brothers heightens to extremes through the two episodes provided to critics. It'd be a safe bet to assume that continues.

Meanwhile, Mike tries to decipher who may have left the conspicuous note on his car before he tried to exact revenge on the Salamanca family. Of course, for anyone who's seen even a few seconds of Better Call Saul's promotions for the new season — or one of the eagle-eyed fans who solved an intricate easter egg in season two's episode titles — that person will be drug kingpin Gus Fring. Fring's return — or technically, introduction — was never intended to be a secret, but it's worth keeping mum on how the show brings him to the foray. What I can say: there's some taut camera work that, if you're a Breaking Bad fan, will feel like a psychological thriller thanks to the use of a clever backdrop.

We also get the most revealing flash-forward to Jimmy/Saul's post-Breaking Bad fugitive life as Gene the Cinnabon manager in Omaha, Nebraska, once again filmed in an eerie black and white. This time, he rats out a shoplifter who tries to hide from the police inside the mall. However, as the shoplifter is being dragged away by the cops, Jimmy blurts out that the man should refuse to talk to the police until he gets a lawyer. It's a telling moment, and one that should reflect what we continue to see in Jimmy's transformation to Saul Goodman on the series: Even in his most dire moments, Jimmy can't help but stick to his guns.

But Jimmy didn't transform into Saul Goodman overnight, nor did Mike become the ruthless enforcer for Fring. Co-creators Peter Gould and Vince Gilligan (he too of Breaking Bad) are weaving a delicate thread that's slowly beginning to show itself. And while we know the endgame for these characters, the journey continues to be enthralling three seasons in.

It goes without saying: Better Call Saul is a damn good prequel.