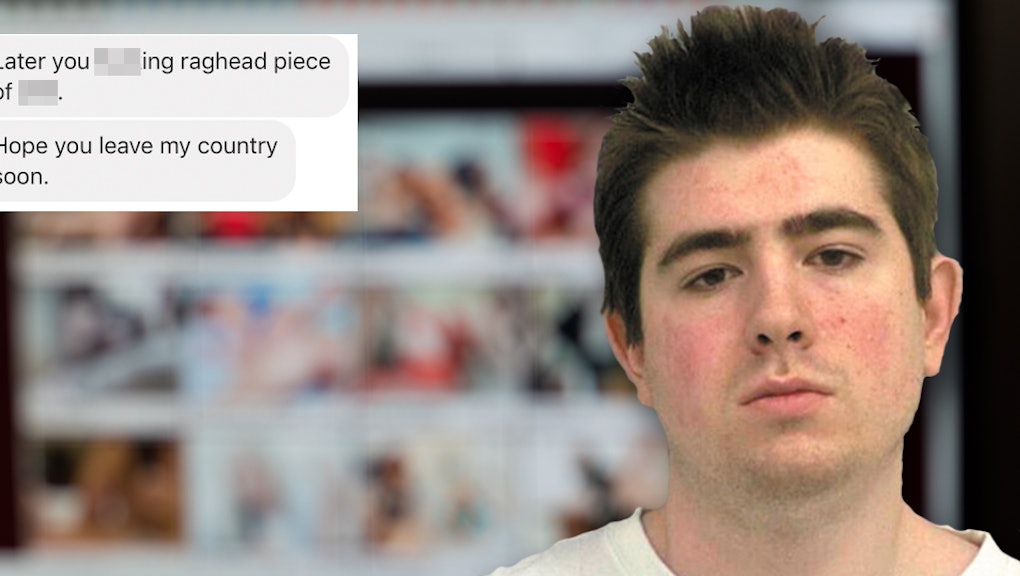 But on Tuesday, according to screenshots published on Facebook and provided to Mic, Brittain flew into a rage against a New York-based venture capitalist over Facebook Messenger, calling him a "fucking raghead piece of shit" and a "fuckin' towelhead piece-of-shit invader."

The VC, who asked to remain anonymous in order to speak freely, first reached out to Brittain on Messenger to ask why he had been sending friend requests to some of his female friends on Facebook.

"Because they have money," Brittain responded. "I requested a bunch of the male ones, too."

"I'm getting a lot of weird responses from people," said the VC. "Not cool, man. And they actually don't [invest in startups]."

"Anyone who's butthurt by a friend request is a loser anyway," Brittain responded. He said they should "find a safe space," and that "they should be honored to even be in my presence. ... I'm a fucking genius and a legend."

If [these women] have problems, they can message their problems to me and I'll tell them where they can shove their problems. :) Otherwise, talking in circles, it's really cowardly and unprofessional, so fuck their opinions.Women in general should be grateful that men are now allowing them to have opinions.Yay for progress and diversity, allowing less qualified women to participate in what is traditionally a qualified men's world.

"Tough, suck it," Brittain said. "You'll have to deal with guys like me soon. Middle America will take over California. And we don't do the PC bullshit. You'll have to fucking include us one way or another. So you better get over your fucking feelings. We're fine with your progressive bullshit in our space, but you're not going to cast out our views. Free speech is our right."

"It takes a lot for you to make that assumption of me," said the VC.

"I'm allowed to say anything I want to fuckin' say," Brittain said. "So are you. You come from a country where that isn't allowed."

"Middle America will take over California. And we don't do the PC bullshit."

"I was born here," the VC said. "Look, I'm going to leave this conversation. All I was aiming towards was that you were sending friend requests to my friends who are very confused, and the fact that a bunch of my female friends are asking makes me alarmed."

That's when Brittain flew off the handle. "You need to learn respect and to learn to listen, especially to racially superior people," he said. "Later, you fucking raghead piece of shit. Hope you leave my country soon. And take your fucking Arab socialist communist friends with you. Fuckin' towelhead piece-of-shit invader. Fuckin commie."

This isn't the first time Brittain has gone off on a potential investor. In November of 2015, security researcher Asher Langton posted screenshots of emails from Brittain to a potential Dryvyng investor.

"I hope you get a terminal illness," reads part of the emails. "Rot in hell, Ben."

The email also included similar language to Brittain's exchange with the venture capitalist on Tuesday, including homophobic, expletive-laden messages signaling his disdain for leftists and socialists.

In 2015, Brittain demanded that Google remove links to articles that mentioned the FTC cracking down on his revenge-porn business. The odds were against him, as Ars Technica noted: "In this instance, fair use and general First Amendment principles are on Google's and the media's side." Of course, as Gawker pointed out, it was ludicrous in the first place that a man who made money exploiting women with their private images was demanding the removal of public information about him.

Since IsAnyoneDown closed, Brittain has updated his Twitter bio to read, "Revenge is over. I closed down those websites on May 23. I won't be making any more of them. The content is gone. I'm doing the right thing now."

We reached out to Brittain 12 hours ahead of publishing and will update with a response.