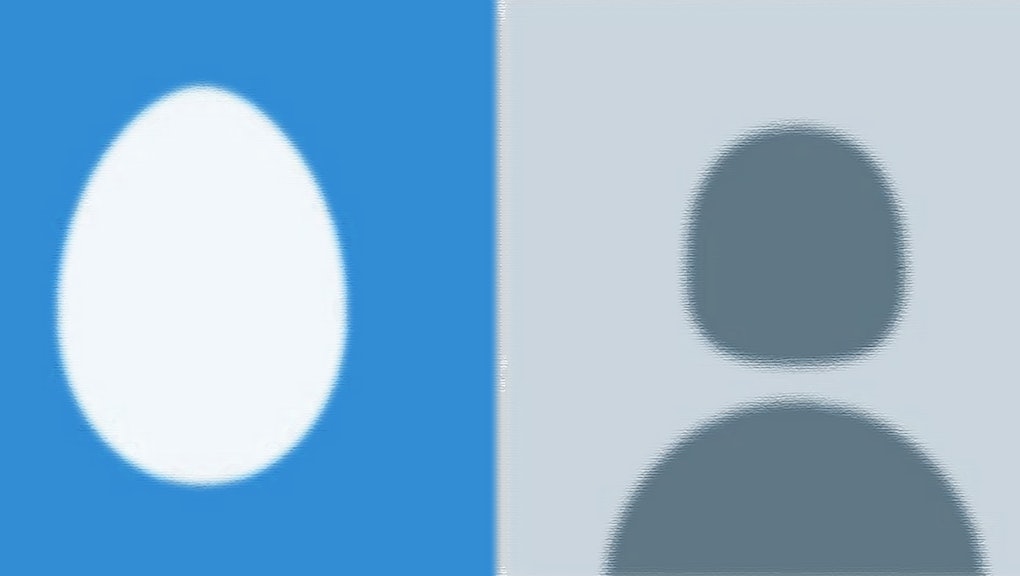 Twitter users kept getting harassed by egg avatars. So the company changed the egg part.

Every time Twitter CEO Jack Dorsey asks his followers what the company can do to improve in the months ahead, calls to curb harassment — especially against women and minorities — rise to the top.

Dorsey always has an answer for these folks, and while it's pretty short on specifics, it sounds somewhat reassuring: "It's our top priority."

Friday, Twitter did finally make an announcement about the site's legions of abusers, many of whom are easily identified by their default avatar — a white egg on a colored background, a signal that the account is new.

That announcement: These harassers will no longer have egg avatars. They will have a dual-blob silhouette.

Twitter's reasoning for this change was mostly just corporate tech boilerplate — it's changed the avatar many times over the years; it's always refreshing the brand; it wants to encourage users to personalize their profile with more of a "placeholder" image. But Twitter's blog post also contains this stunning failure of sociological insight:

We've noticed patterns of behavior with accounts that are created only to harass others — often they don't take the time to personalize their accounts. This has created an association between the default egg profile photo and negative behavior, which isn't fair to people who are still new to Twitter and haven't yet personalized their profile photo.

Anyone who has spent more than four minutes on Twitter knows this isn't the problem. That newcomers may have been unfairly stigmatized by their egg avatars is far beside the point. Updating your social media network's basic icons? Hey, that's your prerogative. But don't pretend it does anything to help people threatened or doxxed by anonymous users.

"Egg" had indeed become Twitter shorthand for a person who did nothing but insult, spam and menace other users (and in all likelihood, we'll still call them that going forward). The egg avatar was a useful flag in identifying such trolls, who tend to set up multiple accounts without bothering to customize them or simply want to affect a facelessness in their campaigns of unchecked hostility. If anything, changing the de facto logo will let abusers blend in to the Twitter ecosystem until the rest of us acclimate to the difference.

The rest of Friday's Twitter blog post, which explains the meticulous yet myopic reasoning behind the new default avatar design, is essentially moot. Twitter could have picked any image and faced the same sarcasm and scorn. The company ought to have asked which really came first — the Nazi or the egg.

Anyway, we bid you adieu, dear eggs. There was something undeniably funny — at times — about getting yelled at by this symbol of unborn potential, of something hidden that might one day see the light and take wing. Eggs leave behind a toxic legacy unmatched anywhere on the internet, as if smashed against the side of our house, dripping and sour and rotten.

The future will be just as ugly, but it comes in a new bland shape.