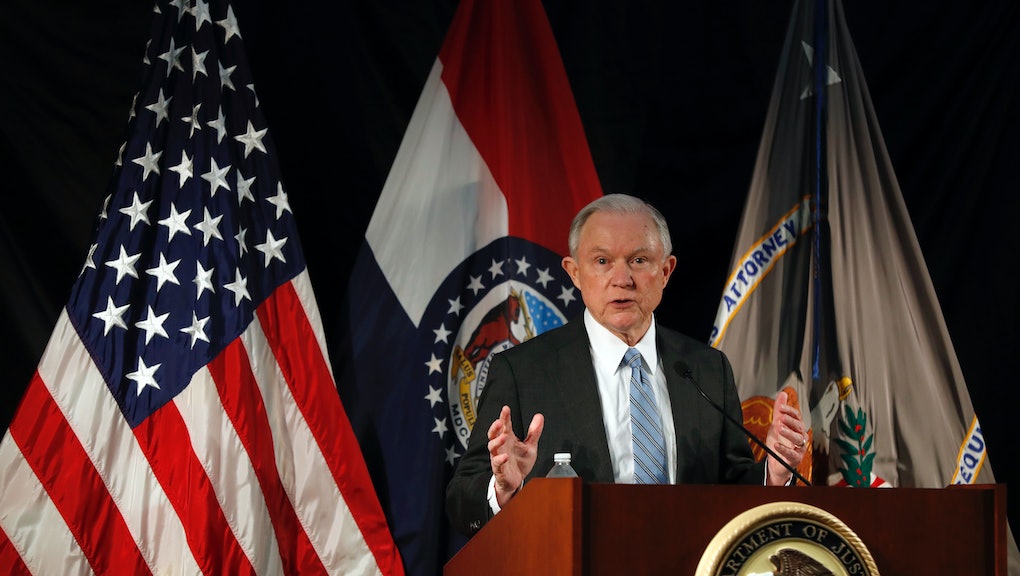 "We should remember some context," Sessions said. "In the past four decades, our nation has won great victories against crime. Overall, crime rates remain near historic lows. Murder rates are half of what they were in 1980. We have driven the violent crime rate down to almost half of what it was at its peak."

This "context" seems to have escaped Trump, who continues to push the lie that crime is the worst it's been in decades. The president dedicated much of his speech at the Republican National Convention and his inaugural address in January to painting the U.S. as a blood-soaked hellhole where criminals run rampant, and still peddles demonstrably false statistics about how matters have only gotten worse.

"The murder rate in our country is the highest it's been in 47 years, right?" Trump told a roundtable of county sheriffs in February. "Did you know that? Forty-seven years."

PolitiFact rated this February statement "false," citing FBI data that shows murder rates have plummeted since peaking in the early- to mid-1990s. The Guardian U.S.'s Jon Swaine reported that Friday marked a rare instance of Sessions openly contradicting his boss. (Sessions was reportedly supposed to deliver a similar statement in February but omitted the part about low crime.)

While murder rates have risen slightly since 2015 — causing some observers to express concern — the "law and order" ethos of criminal justice that Trump embraces has been read mostly as code for advocating aggressive police crackdowns on black people, brown people, Muslims and protesters. And even if Trump's attorney general is more grounded is statistics, in this case, that approach hasn't changed during his presidency.