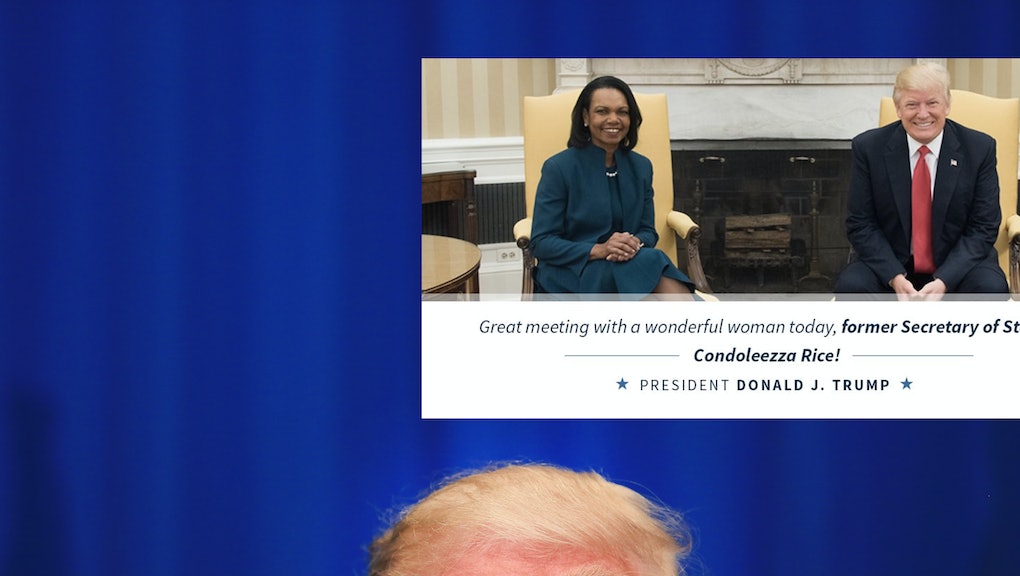 Trump just met with Condoleezza Rice. Guess she's over him reportedly calling her a bitch.

It looks like those with short-term memories make for fast friends.

President Donald Trump met with former Secretary of State Condoleezza Rice on Friday, announcing the meeting on Twitter and calling Rice "a wonderful woman." It's a vast improvement from one of the last times we heard about Rice from Trump, when he was referring to her as "a bitch."

The "bitch" comments first came from a New York Daily News report about a keynote Trump gave in New York in 2006.

"Condoleezza Rice, she's a lovely woman, but I think she's a bitch," Trump allegedly said as the audience of 8,000 applauded. "She goes around to other countries and other nations, negotiates with their leaders, comes back and nothing ever happens."

In another video from the CNN archives, Trump says, "I wish she was a bitch. I don't care if she's a lovely woman. I want somebody that can go and make deals."

When CNN asked Rice about the comments a month before the election, she responded, "Can't wait until November 9," the implication being that he was going to lose the election.

Now that he decisively didn't lose the election, Rice has joined the ranks of capitulating Republicans willing to share in the works of a political player that she once said "should not be president" and "should withdraw" from consideration.

But what was the content of the meeting? No one knows. That's a secret between uncommon allies.