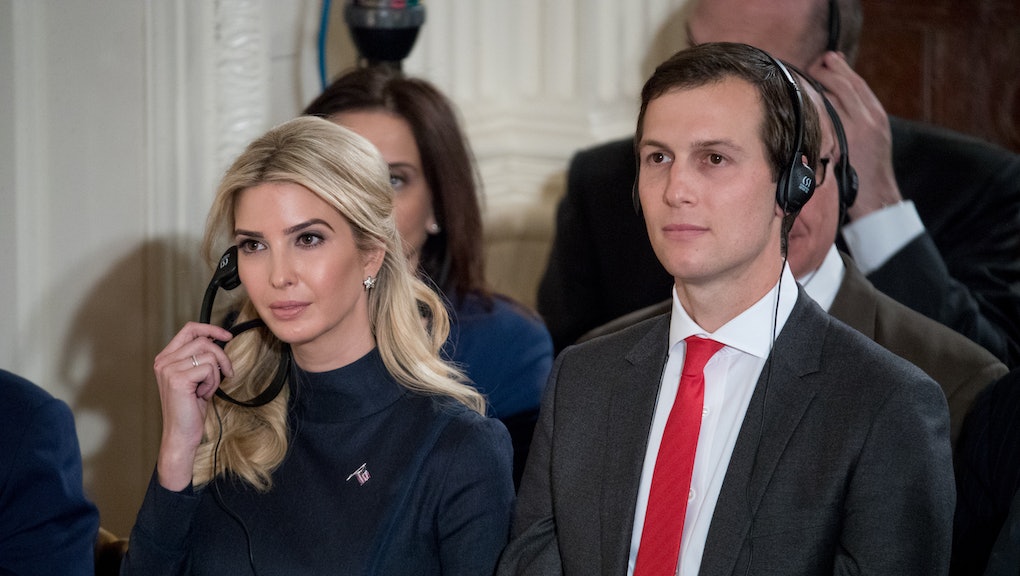 This couple is not far from the billionaire's club.

According to a financial report released by the White House on Friday, first daughter and assistant to the president Ivanka Trump — and her husband, senior adviser Jared Kushner — may hold financial assets exceeding $740 million, USA Today reported.

The couple's empire includes a vast portfolio of real estate holdings, including Ivanka Trump's share of the Trump International Hotel, just a few blocks from her father's White House residence, where she and Kushner now advise President Donald Trump. Ivanka Trump's stake is worth anywhere from $5 to $25 million.

Government employees are required to report assets in ranges. The Trump-Kushner empire is worth anywhere between $240 million and in excess of $740 million. According to USA Today, Kushner has divested himself from dozens of business and investments and resigned from more than 260 positions that may have presented conflicts of interest with his White House role.

According to USA Today, both Ivanka Trump and Kushner will continue to earn money from the businesses they built, including Kushner's father's real estate empire. Ivanka Trump's fashion-licensing brand has been put in a trust controlled by two of her relatives — a trust worth more than $50 million.

"The remaining conflicts, from a practical perspective, are pretty narrow and very manageable," Gorelick told the Associated Press.

Kushner and Trump's financial disclosures are part of roughly 180 reports set to be released over the weekend, though Trump and Vice President Mike Pence's reports will not be among them. The reports are snapshots of officials' assets and liabilities prior to serving in the Trump administration, versus a complete inventory of current holdings.

"I think it speaks volumes to the desire for a lot of these people to fulfill the president's vision and move the agenda forward that they are willing to list all of their assets, undergo this public scrutiny," Spicer said.