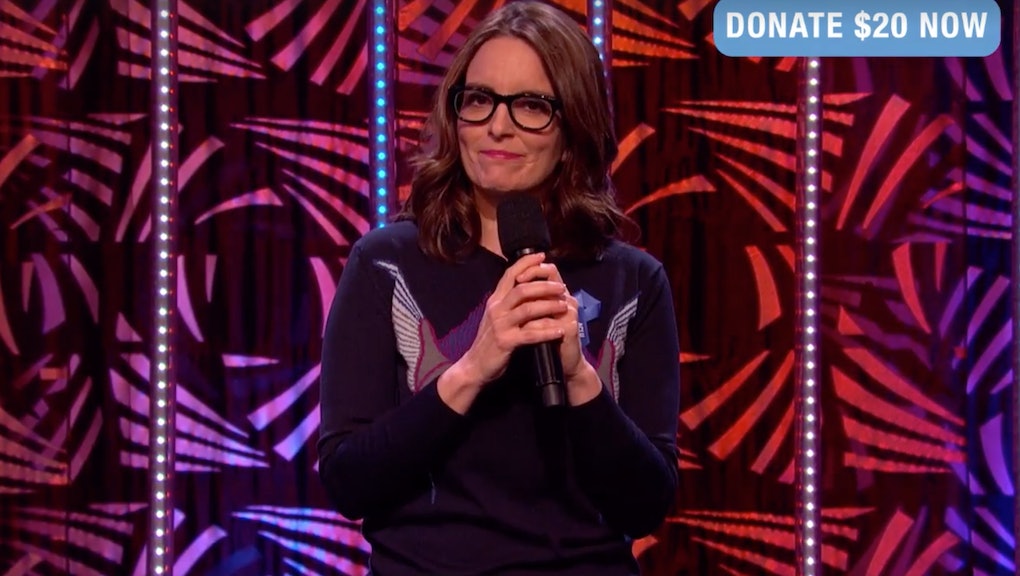 On Friday night, the American Civil Liberties Union live-streamed a fundraiser featuring Tom Hanks, Alec Baldwin and Tina Fey in a modern-style telethon that saw stars interact with donors through the internet rather than over the phone.

During the live stream, comedian Tina Fey took to the stage and told a few jokes about Donald Trump, eventually turning to Trump's unironic declaration of April being National Sexual Assault Awareness and Prevention Month, despite previously being caught on tape saying that he would "grab women by the pussy" thanks to his fame.

"Earlier tonight, in what is surely an April Fools' joke, the president proclaimed that next month will be National Sexual Assault Awareness and Prevention Month," Fey said. "So now we know what he gave up for Lent."

In October, after a tape leaked of Trump condoning sexual assault, women responded to the leak by sharing stories of their own experiences with sexual assault.

Fey also had some jabs for Mike Pence, who allegedly doesn't dine alone with women who aren't his wife, and is a fervent opponent of Planned Parenthood.

"Lucky for us, Mike Pence can't go and shut down a Planned Parenthood unless his wife goes along with him," Fey said.

According to the ACLU, proceeds from the benefit will go toward "protecting the civil rights and liberties that truly make America great." After Trump signed his de facto Muslim ban, the ACLU took Trump to court over the order and won.

As part of the evening, several celebrities, including Mahershala Ali and Lin-Manuel Miranda, recorded a commercial discussing the importance of the ACLU.