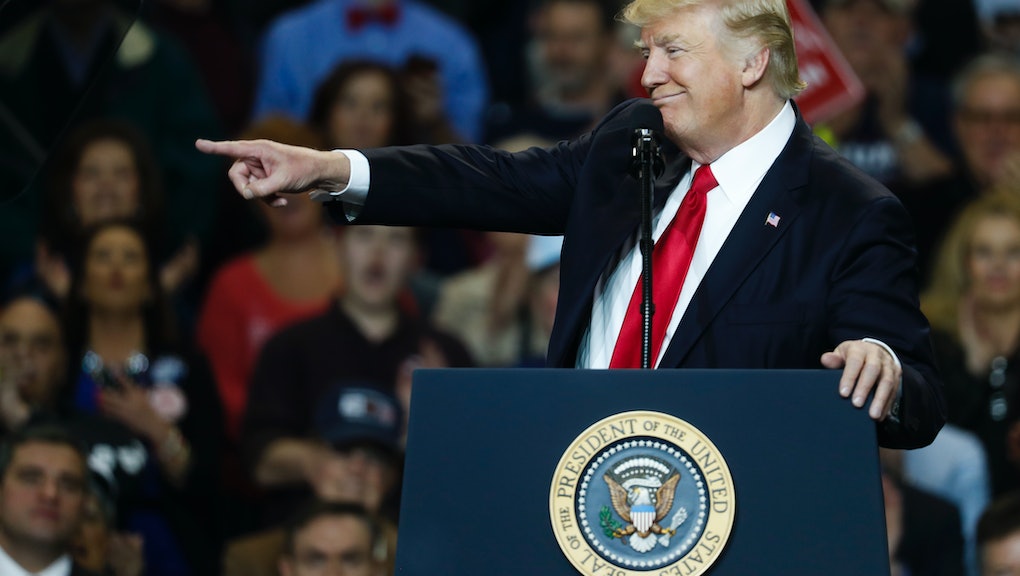 Outrageous things President Donald Trump has done or said coming back to haunt him has become an early theme of Trump's nascent administration. The latest example: A federal judge in Kentucky has refused to throw out a lawsuit claiming Trump incited crowds to violence at a March 2016 campaign rally in Louisville.

According to the Washington Post, Judge David J. Hale wrote that when Trump ordered his supporters to eject protesters by repeatedly yelling "get 'em out of here," it was "plausible" the president `intended for them to get violent.

"It was an order, an instruction, a command," Hale wrote.

At least three people were violently removed by Trump supporters in the crowd during the incident. The Courier-Journal reported that Hale took particular concern with Trump's "reckless" decision to cheer the removal of a black woman, given that it was known hate group members such as white nationalist Matthew Heimbach — who is facing charges for his role in the violence — were in attendance.

Violence became somewhat of a fixture at Trump rallies, with then-candidate Trump often gleefully cheering on or goading audience members who took it into their own hands to assault demonstrators. Trump openly advocated violence against the protesters, often reminiscing on stage about the "good old days" when violence against demonstrators went unpunished.

As the Post noted, this is just the latest example in which Trump has belatedly discovered his words actually have consequences. His de facto Muslim ban was recently halted in court thanks in large part to Trump's loose tongue about its discriminatory intent, with a Hawaii judge harshly rebuking the president and his surrogates' statements on the campaign trail and in media appearances.