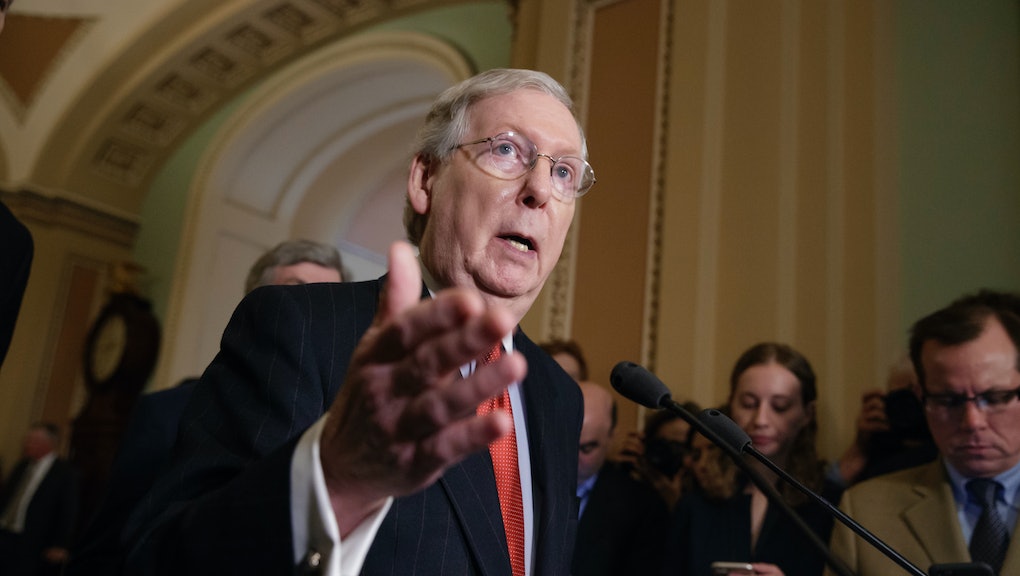 Host Chuck Todd in turn took the occasion to press McConnell on whether he regretted blocking Barack Obama's prior nominee Merrick Garland from ever reaching a floor vote, leaving a somewhat flustered McConnell hard pressed to justify the 10-month refusal to so much as hold a hearing for Garland.

"The tradition had been not to confirm vacancies in the middle of a presidential year," McConnell told Todd. "You'd have to go back 80 years to find the last time it happened."

But when Todd pressed McConnell on why the senator blocked Garland from ever having a committee hearing, not just oppose his confirmation, McConnell veered into full error: divide by zero territory.

"Look, we litigated that last year," McConnell said. "The American people decided that they wanted Donald Trump to make the nomination, not Hillary Clinton."

"You say it's been litigated, the Garland situation," Todd shot back. "For a lot of Senate Democrats, they're not done litigating this ... What was wrong with allowing Merrick Garland to have an up or down vote?"

"I already told you!" McConnell said. "You don't fill Supreme Court vacancies in the middle of a presidential election."

But McConnell was willing to apply a completely different standard to whether it would be improper for Democrats to filibuster Gorsuch in response: "To oppose cloture, on a partisan basis, to kill a Supreme Court nominee ... never happened before in history, in the whole history of the country."

"No Supreme Court justice has ever, in the history of our country, been stopped by a partisan filibuster, ever," he added, ignoring that Republicans' refusal to give Garland a hearing had a nearly identical effect.

According to the New York Times, as Garland met with all dozen of the Republican senators who agreed with him, many openly acknowledged the refusal to schedule a hearing was political. One study in the New York University Law Review concluded it was "an unprecedented development." Even Gorsuch has hinted the Senate appeared to have blocked Garland because of "political disputes" rather than concerns over Garland's qualifications.

McConnell has good reasons to avoid admitting that — especially as he is working to carefully flip Democrats to prevent a Gorsuch filibuster. Democratic leadership like Senate Minority Leader Chuck Schumer have promised to fight Gorsuch's confirmation, and remain angry about the way Garland was treated.

When Todd pressed McConnell on whether he'd consistently apply the dubious election-year standard to future SCOTUS nominees, which could backfire on Republicans, McConnell evaded again.

"That's an absurd question," McConnell responded. "We were right in the middle of a presidential election year. Everybody knew that either side — had the shoe been on the other foot — wouldn't have filled it. But that has nothing to do with what we're voting on this year."