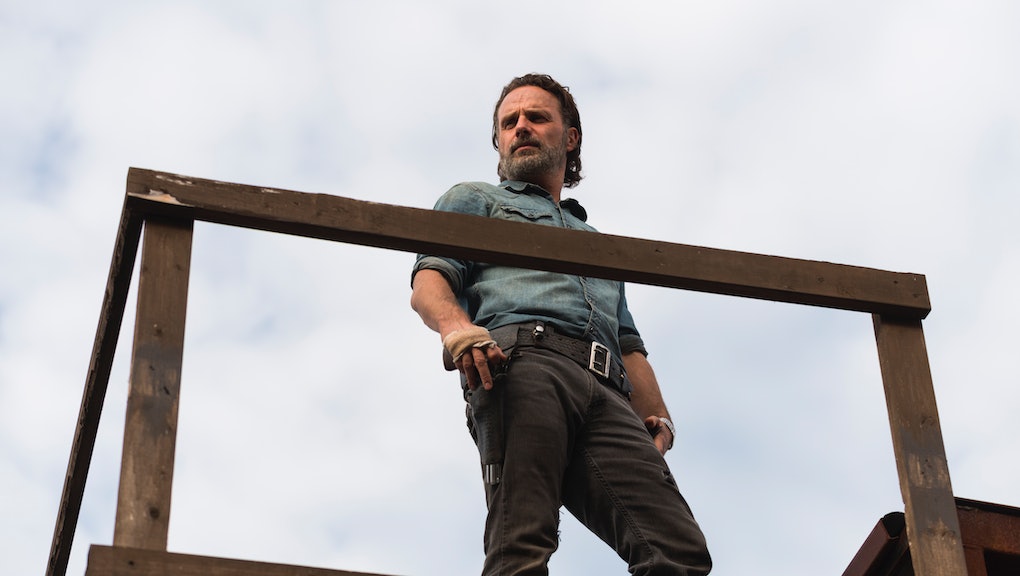 Who died in 'The Walking Dead' season 7, episode 16? A breakdown of the finale

It's not a finale of The Walking Dead without a major character death — and the finale for season seven, "The First Day of the Rest of Your Life," was no exception. Granted, the major death in question wasn't much of a surprise for fans, but the episode still had a few surprises in store.

As expected, Sasha met her end on Sunday in a similar vein to the comic book character Holly. She was going to be used as part of a prisoner exchange between the Saviors and Alexandria, but Sasha swallowed the poison capsule Eugene gave to her in episode 15 while en route to Alexandria. All the while, she had intense hallucinations (likely due to the pill) in which she saw Abraham, who died in season seven's brutal premiere. Aww, it's cute because they're both dead.

Of course, considering actress Sonequa Martin-Green has nabbed a lead role in CBS' new Star Trek series, Sasha's death — while tragic — wasn't a big shocker. What was less expected, however, was the community living within a junkyard turning out to be garbage people.

Remember how they agreed to help Rick and everyone else fight the Saviors — but only after Rick had a damn gladiator battle with a zombie — in exchange for weapons? Well, unbeknownst to Rick, they got a better deal from the Saviors, and turned on Alexandria once the Saviors arrived at the gates. It would've probably meant the end for at least a couple members of Rick's group, and if it wasn't for zombie Sasha catching Negan by surprise and pouncing on him, the war may have never even started.

But the ruckus caused by zombie Sasha attacking Negan gave the Alexandrians a brief window to strike back, and Carl got the ball rolling by taking out a few of the Garbage Humans, as they'll now be referred to. Carl gets brownie points for being the most badass person in this finale.

The Alexandrians did put up a decent fight, but they were eventually subdued again. Meanwhile, the Garbage Humans' leader, Jadis, never let Rick get in on the action, shooting him in the side of his torso and dragging him toward Negan for punishment. However, Negan — who apparently can't let himself kill anyone who specifically tries to kill him — tells Rick that he's going to kill Carl in front of him instead, before mangling Rick's hands.

Rick's response is a stark contrast to his fealty to Negan in the season premiere. Basically, he tells Negan that, regardless of what he does to them, he's going to kill him and the rest of the Saviors. Ballsy? Definitely, especially when Negan's holding his bat Lucille and is gearing up to swing it at Carl's head. Is Carl going to die?

Evidently not, thanks to Shiva Ex Machina. Yes, the amazing CGI tiger who's spent most of the season off-screen (for budgetary reasons, no doubt) attacks one of the Saviors just as Negan's about to swing his bat, with King Ezekiel and the Kingdom coming to Alexandria's aide. Maggie and the Hilltop make it there, too. Suddenly, the Saviors and Garbage Humans are in a full retreat, as Shiva chomps down on another Savior. It is, admittedly, quite satisfying. The "All Out War" has begun, this being the first of what should be many battles between the Saviors and Alexandria (and their allies) that will continue into season eight.

Was the season seven finale of The Walking Dead perfect? No — episode 16 was a bit absurd in that among all the gunfire between all the communities, the only major character to meet their end in the finale was Sasha, and she was dead before the shooting began. Still, it's a far cry from the beginning of the season, which came on the heels of an infuriating cliffhanger and saw two beloved characters beaten with a baseball bat, most of that disgusting, gory impact visible on-screen.

The Walking Dead's seventh season wasn't really a roller coaster; there were very few highs outside of Morgan, Shiva and Jerry, a new fan favorite. A lot of the episodes were stagnant and spent way too much time building up to Rick's rebellion and, eventually, the action-packed finale. But let's give the series credit: It built up the hype for Sunday, and the first battle between Alexandria and the Saviors delivered on it. Hopefully they can carry this momentum heading into next season, with all the communities now in on the action.

Also, and this should go without saying, please show Shiva killing more things in the future.