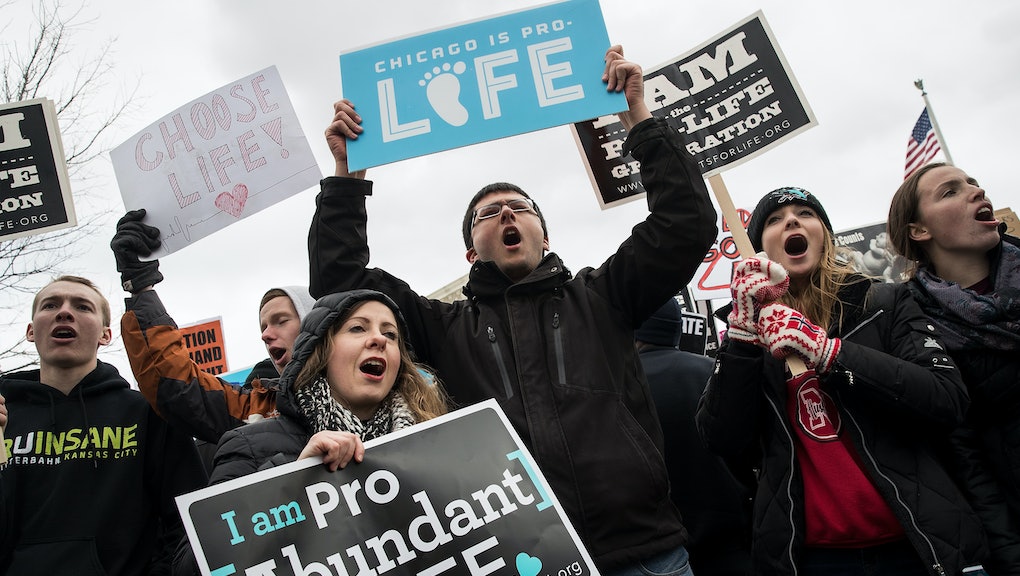 Arizona is now among the most abortion-restrictive states in the country. On Friday, Gov. Doug Ducey signed into law a bill that obligates doctors to do everything in their power to maintain fetuses that are born alive during the course of an abortion — which was in fact already federal law.

As the Daily Courier reported, Senate Bill 1367, which will go into effect this summer, requires physicians to ensure "all available means and medical skills are used to promote, preserve and maintain the life" of a "fetus or embryo" born alive during an abortion — even if the fetus is born before viability, or the point at which it could reasonably survive outside the womb.

There are many layers of futility to this legislation: Per the Centers for Disease Control and Prevention's most recent numbers, as of 2013, nearly 92% of abortions occurred within the first 13 weeks of a pregnancy, when there is no possibility that a fetus could survive on its own outside the womb, and roughly 7% occurred between 14 and 20 weeks. Just over 1% of abortions occurred thereafter. Fetuses are nearly never born alive during an abortion.

And even if they were, the Born-Alive Infants Protection Act of 2002 already requires that doctors provide fetuses born during an abortion with medical care that would help them survive.

As the Courier reported, Arizona's current rules on late-term abortions already protect "delivered alive" fetuses, but give doctors the latitude to judge whether or not treatment would actually save the fetus. But, under SB 1367, "delivered alive" now has a very specific definition in Arizona: Presence of a heartbeat, breathing, umbilical cord pulsation or "definite movement of voluntary muscles." That definition is consistent with the Born-Alive Infants Protection Act, but Arizona's new law goes further by revoking a doctor's ability to make case-by-case judgements.

As Vice reported, none of the aforementioned characteristics indicate an increased likelihood of fetal survival, but if any of them is present, Arizona doctors must continue trying to keep the fetus alive until the moment it becomes unmistakably clear that it will die — even if it was clear the the fetus's life was not viable.

"If the fetus or embryo is born alive, according to the definition in the underlying bill, there is an absolute obligation to resuscitate," Arizona Democratic Rep. Kirsten Engel, who opposed SB 1367, said during debate on the bill, according to the Courier.

"It will do no more than temporarily prolong the act of dying," she continued. And drawing out death is, in many cases, a lot less humane than the current practice of providing comfort care and allowing the fetus and potentially the mother some final moments in relative peace.

SB 1367 only exempts doctors from pulling out all the stops in the case of a "specific lethal fetal condition," diagnosed in advance, according to the Courier. The new law also mandates that clinics providing abortions or medically induced early births at or after the 20th week of pregnancy must have medical professionals with a neonatal background and specific equipment present in case a fetus is born alive, as directed by specific "protocols" the state Department of Health Services will be required to develop.

The Courier suggested that Ducey was prepared to sign the legislation regardless of its particulars. But this bill has one glaring problem: It's simply not necessary. The existing federal law already protects born-alive fetuses.

"For OB/GYNs, the boundaries are clear," as Rewire put it. "A baby is a baby, and a fetus is a fetus." Arizona has only made its standard of abortion care more cruel.

Like many other anti-abortion laws, SB 1367 threatens to undermine Roe v. Wade, insinuating that "life begins" long before viability at 24 weeks. For abortion opponents, it's an inarguable win. For women and for medical professionals, though, it's another story entirely.