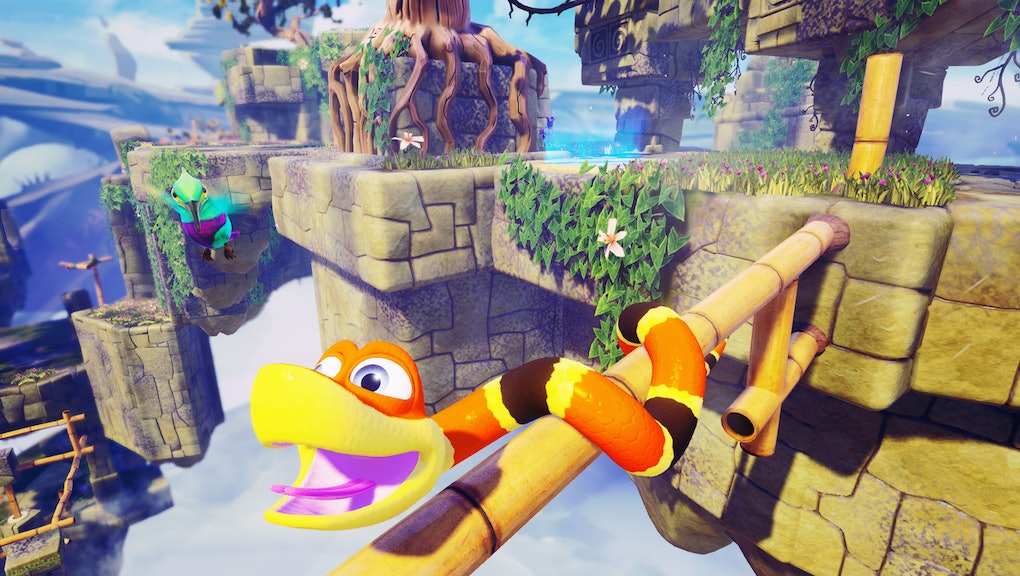 In an era of endless video game controversy, I hope we can all agree on one thing: The ability to jump is pretty important in a platformer game. Super Mario 64, Banjo-Kazooie, Jak & Daxter and all the rest took different approaches to the genre, but they all let you jump. You'd have to be out of your mind to make a 3-D platformer with no jumping. Enter Snake Pass.

Created by the folks at Sumo Digital, Snake Pass is an eclectic serpent simulator that calls back to some of the games I mentioned above, while carving out a path of its own and slithering right through it.

In Snake Pass, you play as Noodle, a happy little snake who can't run or jump on account of the fact that he's a snake. Yeah, turns out you need legs and feet to do that stuff. That hasn't stopped Noodle in his quest to collect all sorts of colored gems, orbs and coins, and it shouldn't stop you from joining him on it.

Movement is one thing, but actually completing the game's challenges is another. Instead of jumping from one platform to the next, Noodle's job is to climb bamboo poles to get where he's going. It's entirely physics-based, meaning one wrong move with the analog stick can send Noodle to his death in a bottomless pit or spike trap. The idea is to hold the left trigger to grip whatever you're climbing, then coil up and release for some vertical momentum.

It's incredibly tricky to understand at first. For the first hour or so of the game, I found it charming but frustrating, as the grip mechanic isn't explained especially well. Every time I successfully climbed something, it felt accidental. At some point, though, it just clicked. It's still challenging at times, but I usually feel like it's my fault when something goes wrong.

None of this would be fun at all if it didn't feel good, but Snake Pass nails that aspect. Slithering and climbing using the game's physics feel outstanding. The best 3-D platformers like Super Mario 64 make it a joy to simply run and jump. Snake Pass did that without any running or jumping.

Snake Pass review: Just chill out and have some fun

Fun platforming challenges are all fine and good, but Snake Pass succeeds the most (at least, based on what I've played) by letting you mellow out. There's no time limit, nor are there enemies to contend with. Yes, you can fall to your death, but if you take it slow and think about what you're doing, you'll be fine.

The only major criticism based on the few hours I've played is the checkpoint system. You slither over icons on the ground to save your progress, but they aren't always placed sensibly. Instead of being placed before a hazardous spike trap, they might be placed right after it. If you die, you lose all of the gems and orbs you've collected since hitting the checkpoint, which is the worst part of all.

A game with somewhat arcane controls that take a while to fully grasp should be more forgiving than that. Still, the levels aren't huge or anything, so you're not losing much time every time you die.

The colorful visuals and catchy music are appropriate for the kinds of late 1990s mascot-based platformers Snake Pass calls back to. Perhaps most importantly, Noodle himself is adorable. His facial expressions are dynamic based on what's going on, but you can also use the D-pad to change it on the fly. If you want Noodle to look stoked at all times (I certainly do), you can do that. Noodle is the best.

It's going to be interesting to see how Snake Pass compares to the imminent Yooka Laylee, which seems like a much more traditional 3-D platformer for fans of the classics. I haven't played Yooka Laylee yet, but based on my relatively short time with Snake Pass, I think anyone who likes adorable reptiles and chilling out should give it a shot.

Snake Pass is $20 on PS4, Xbox One, Nintendo Switch and PC. To see it in action, watch the trailer below.