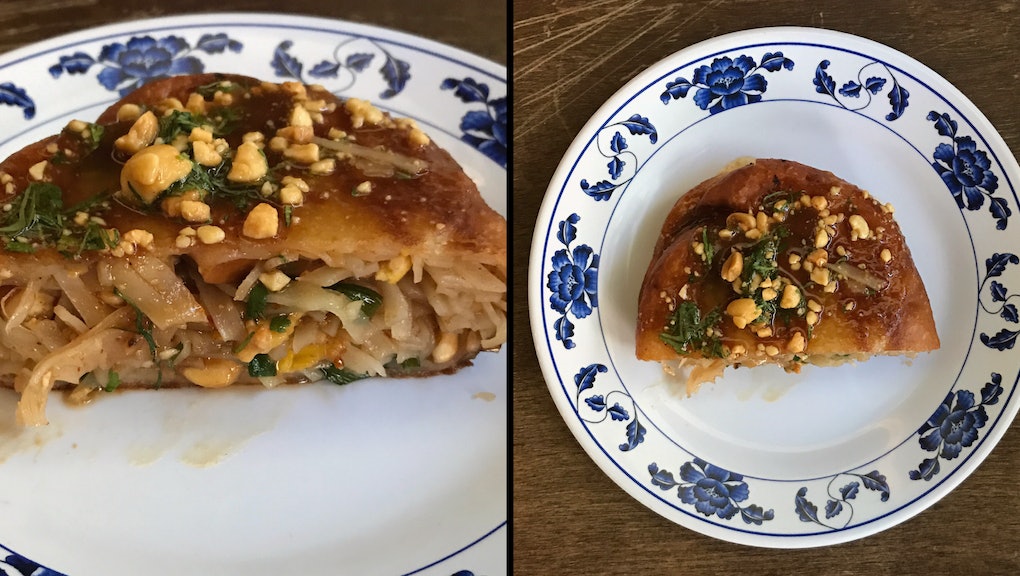 My stomach isn't growling — it's screaming in anticipation. I'm at Pig and Khao, a Filipino and southeast Asian-inspired restaurant in the Lower East Side of New York City, and head chef (and former Top Chef alumna) Leah Cohen is making pad thai for her new "padcakes." It's an inventive appetizer that brings Thai and Korean together in the most delicious way possible. Padcakes aren't on the menu but customers in-the-know can order them starting at 5 p.m. each day, until the restaurant runs out.

Padcakes — a recent obsession among Instagram foodies — are a delightful fusion of Thai and Korean. They're a riff on hotteok, aka "Korean ho cakes," a popular Korean street snack that can be either sweet or savory. Instead of stuffing the yeasty dough with traditional fillings like brown sugar and cinnamon or bulgogi, Cohen uses spicy pad thai with smoky tofu and serves the appetizer with a pad thai sauce finished with peanuts and cilantro.

How these padcakes are made

First, the Pig and Khao team makes padcakes dough ahead of time, letting it rise twice, refrigerating it and then bringing it back to room temperature to work with. They also typically make the pad thai with smoked tofu ahead of time and let it cool before using the noodles in the padcakes. ("Otherwise the noodles get overcooked," Cohen says.)

But on my visit, Cohen makes the pad thai in front of me. She cooks the noodles 75% of the way, adding Chinese chives and bean sprouts, and then lets the noodles cool to room temperature.

The noodles cascading onto the sheet pan in the GIF below can make 20 padcakes.

Once the pad thai has cooled, Cohen swaddles the noodles with the pre-made dough. She dons plastic gloves and uses plenty of oil to help her work with the sticky dough. It's like she's wrapping up a present.

"When [the dough tears and] gets a hole, it gets really greasy," Cohen notes, explaining that adding extra flour to the dough helps it resist tearing.

Next up, fry time. Cohen slides the padcake into hot oil, first searing it and then cooking it on low. "You don't know if it cooks until you cut into it," she says. Translation: You're screwed if you mess up.

Cohen blots the padcakes with paper towels to rid them of excess oil and then — ta-da! — they're ready to serve.

The padcakes taste as good as they look. Chewy, seared dough envelops delicate noodles that deliver heat that builds with every mouthful. I drown each bite with a generous portion of the pad thai dipping sauce, and holy YUM. After eagerly devouring a fourth of a padcake, my taste buds are happily tingling from the chili flakes in the pad thai.

"If it were up to me, everything would be super spicy," Cohen says, explaining she imports her chili flakes from Thailand. Cohen and her husband head to southeast Asia each year "for R&D," she explains. "Usually we want to redo the whole menu {after our trip}."

But the inspiration for padcakes didn't come from international travel — it actually came from YouTube. Lurking on the Internet for kitchen motivation proves chefs are just like us! Except, of course, there's slim chance I could recreate — or improve upon — a recipe from the Internet anywhere near as well as Cohen does.

Cohen says she came across a video of a Korean woman making Korean Ho cakes with japchae (glass noodles). "She's the shit in Korea," Cohen says. "I made [her dough,] and I was like, 'How can we make this southeast Asian?'" Cohen says.

The Pig and Khao menu has never featured pad thai on its own, so the padcakes are basically the only way you'll taste Cohen's heavenly version of the popular (and usually ubiquitous) Thai dish.

For customers who can't get enough of the hotteok-style appetizer, Cohen will be serving a new flavor on the Pig and Khao tasting menu, which is a five course meal available Monday through Thursday. Filled with braised beef short rib with potato puree and sautéed kale, the dish is served with a massaman curry dip.

Hungry yet? Hustle over to Pig and Khao before April is over to taste Cohen's padcakes.