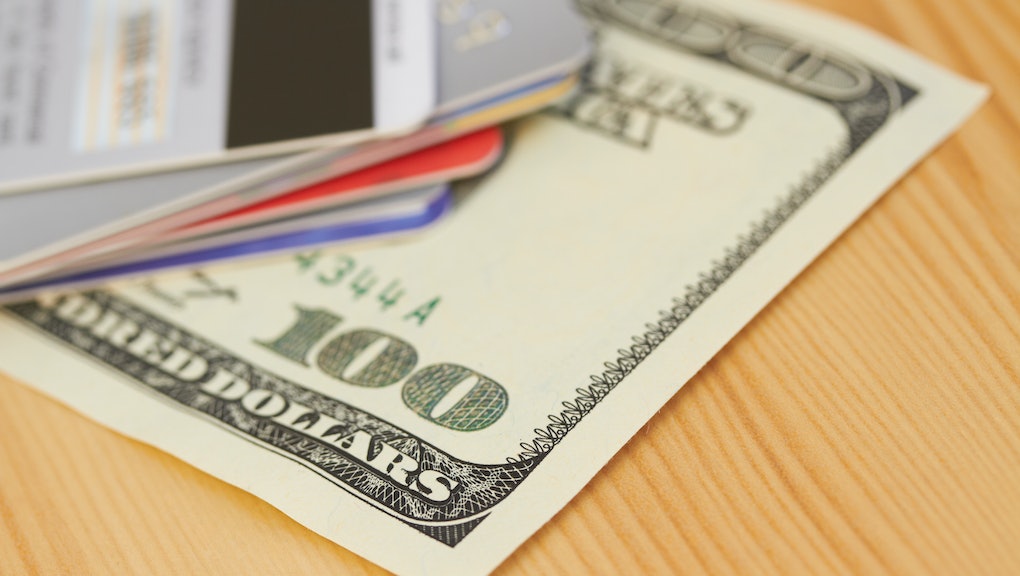 Credit cards are getting more expensive. Or, more precisely, the cost of carrying a balance is getting more expensive. That's according to CreditCards.com, which found that the average card annual percentage rate ticked up at the end of March to 15.63% — the highest it's ever been since the company began tracking rates in 2007.

That's bad news if you carry or will soon carry a balance, especially since interest rates are expected to only continue climbing more in the future. On the whole, borrowing will get harder, though saving in an interest-bearing account will also become more lucrative.

Unfortunately, this environment of rising interest rates may be the new normal, CreditCards.com analyst Matt Schulz said in a phone interview with Mic.

"When the Credit Card Act of 2009 came around and really changed a lot of the things banks could do around credit cards, there was a lot of moving around as the banks figured out what the market would bear," Schulz said. "And that's kind of where we are now." In other words, the dust seems to have settled and high rates might be here to stay.

Indeed, credit card debt is already expensive relative to, say, mortgages or automotive loans. According to a separate CreditCards.com analysis, a person with the average card debt load — about $9,600 — making minimum monthly payments could end up paying more than $11,615 in extra interest over the term of a loan: more than they ended up borrowing in the first place. It would also take more than two decades to pay off. Yikes.

If you're worried about rising interest rates affecting your credit, there are a few things you can do. Here are three smart moves.

1. Slay any debt with a balance transfer

If you have a high balance but decent credit, Schultz said, then you may want to consider getting a balance transfer to a new card. By signing up for a new card, you can take advantage of a low (or zero) introductory interest rate to aggressively pay down your debt.

"We're seeing balance transfer cards that are offering 15 months, 18 months, 21 months with no interest," Schultz said. "If you're someone who carries a big balance, you can save a lot of money in interest if you can go 21 months without interest."

Just how much money? The average household pays about $1,300 per year in interest, according to NerdWallet. If your balance is larger, or the introductory period is longer than a year, you could theoretically save even more.

There is a caveat here. Schultz said that while transfer balance cards aren't all that different from other credit cards in terms of costs and fees, you will likely need decent credit to qualify. Some of the cards will also revoke the introductory rate if you're sixty days late with a payment, meaning that "somebody who is struggling with making payments," may want to hold off.

First, take some basic steps to improve your credit score, which will help you get approved for better credit cards. Just be selective once you do apply, since applying for too many cards at once can lead to multiple denials in a short period time of time, and that may end up hurting your credit even more.

There are also ways to raise your score without cards. One strategy you can try is to get a credit builder loan. These types of loans vary in structure but generally, the lender puts a small deposit, usually between $500 and $1500 into a certificate of deposit. (A certificate of deposit is basically a deposit that you agree to not to touch for a few years and, in exchange, the bank pays you interest.) Then you make payments toward the loan which get reported to the credit bureaus. Once you've paid the whole amount off, then the sum is returned to you.

Another way to improve your credit is by getting a secured credit card. With those types of cards, you generally make an upfront deposit in exchange for a line of credit which you can use to begin improving your score. Just be careful, since secured credit cards generally have higher APRs than typical cards, meaning it's even more important not to carry a balance from month to month.

3. Balance the downsides of high rates with a high-yield savings account

Unfortunately there aren't many ways higher interest rates cut in consumers' favor. The higher the prime interest rate, the more people pay to borrow. If you don't have any money to save, then rising rates don't do much for you.

But if you can put even a little bit of cash into a high-interest savings account, suddenly high rates are a boon for your money. If you are balancing both saving and paying down debt, using yields in your favor is a smart hedge.

After years of banks not paying much to savers, the tide is beginning to turn. Banks have already started raising the yields on CDs. Crucially, if your bank ups its interest rates more, you can always request that the rate on your CD get bumped up as well. Not a bad deal — and it never hurts to ask.

The other move you can make is look for higher-yield savings or even checking accounts. Regional banks tend to raise rates a little faster in response to a rate hike, and online banks generally have higher rates since they have so little in overhead costs. So it's a great time to open that emergency fund — and you can consider using this opportunity to shop around.