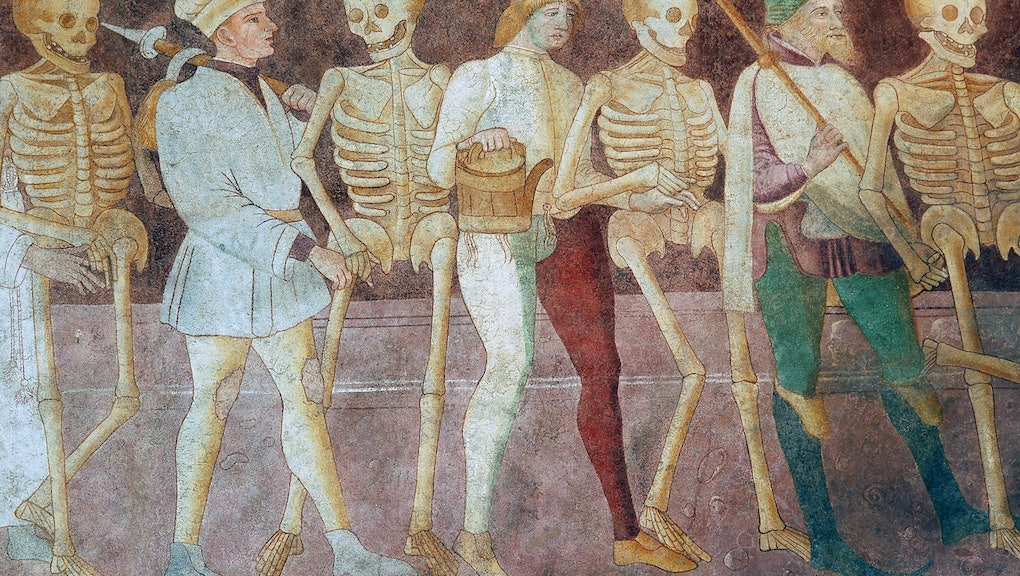 The secret history of how medieval villagers were terrified of zombies

Experts had long been perplexed by a collection of bones found among the ruins of a long-abandoned medieval village — until researchers realized the bones pointed to the villagers' terrible fear of zombies.

The array of 137 bones was discovered in a pit in the deserted medieval village of Wharram Percy in North Yorkshire, U.K., and dates back to between the 11th and 13th century, according to research published in the Journal of Archaeological Science: Reports. They belonged to at least 10 people who died in the village, ranging in age from toddlers to adults.

Strangely, the bones showed evidence that they had been burned, broken and chopped-up with a sword or some other sharp blade. The researchers explored several possibilities that could have explained the condition of the remains, including the possibility that villagers had resorted to cannibalism during a time of severe starvation, or that the bones belonged to outsiders who the villagers had killed and buried.

But the cut marks on the bones weren't consistent with other known cases of cannibalism, and dental analysis revealed that the bones belonged to people from within the village. So what could be a logical explanation for smashed-up, burned human remains?

A fear of zombies, of course.

"The idea that the Wharram Percy bones are the remains of corpses burnt and dismembered to stop them walking from their graves seems to fit the evidence best," Simon Mays, a human skeletal biologist and one of the lead researchers in the new discovery said, according to the Guardian. "If we are right, then this is the first good archaeological evidence we have for this practice."

In other words, according to Mays, the damage to the bones at Wharram Percy suggests that villagers mutilated the bodies of their dead because they were scared that they would rise again — which was a fairly widespread belief in medieval Europe. As the researchers explained, medieval Europeans believed in "revenants," re-animated corpses that rose from the grave to spread disease and attack the living — not unlike fictional zombies of the 21st century.

Medieval Europeans believed the dead were more likely to come back if they had done evil deeds in life, or if they had died suddenly and still had unfinished business among the living.

Researchers cited the writings of one 12th century monk in Yorkshire who described a revenant corpse that rose at night. The corpse only stopped its wanderings when locals dug up the body, hacked it up and burned it in a fire.

"The medieval period was one in which fear of the dead returning to life was a great concern," Tom O'Donnell, a PhD candidate at University College London, said in an email on Tuesday.

"In the Middle Ages, the gap between the living and the dead was much closer than it is today," he continued. "All people would bodily rise at the Last Judgement, so how hard was it for bodies to arise before then?"

Many writings from that time period described stories of reanimated corpses rising from their graves to sicken the living, returning to life because they were evil or had died violently, O'Donnell explained. But that wasn't always the case: In one medieval story, a baker comes back from the dead to help his wife knead dough.

While the researchers who investigated Wharram Percy can't be completely sure the villagers hacked up their dead neighbors to fight off the walking dead, it seems to be a likely scenario.

The story of the bones, Mays said, "shows us a dark side of medieval beliefs and provides a graphic reminder of how different the medieval view of the world was from our own."