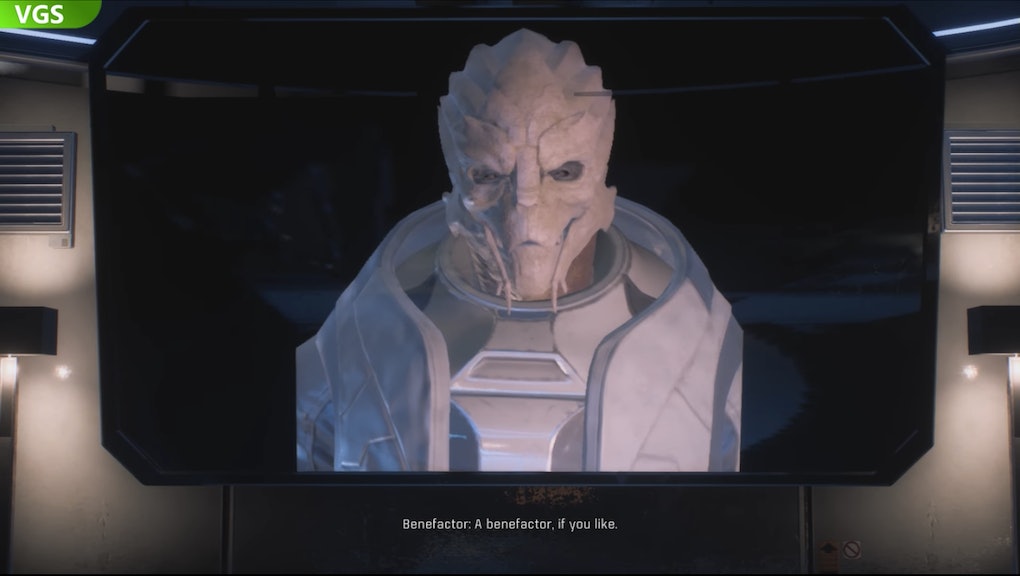 'Mass Effect: Andromeda' Benefactor: Who's responsible for the Andromeda Initiative?

Mass Effect: Andromeda, BioWare's latest chapter in its epic space saga, lets you do a lot of things. You can customize your character, date aliens and field moral quandaries, but it still keeps a few mysteries under lock and key once you've beaten the game.

One secret the game keeps under especially tight wraps is the identity of the Benefactor, a mysterious individual who you find out bankrolled the entire Andromeda Initiative. But who is this mysterious patron? The internet has some theories, so read on if you don't mind spoilers.

Mass Effect: Andromeda benefactor identity: Is it The Shadow Broker?

Reddit has a number of theories about who the mysterious Benefactor could be, but one frontrunner is the Shadow Broker, a mysterious figure who deals in information and whose mantle would eventually be inherited by Dr. Liara T'Soni, a recurring party member from Mass Effect 1 and 3.

However, Reddit users have debated whether or not it could be T'Soni as the Shadow Broker because of the Benefactor's murder of Jien Garson, leader of the Andromeda Initiative — a murder that you investigate as part of a quest in-game.

"This was far ahead of Liara becoming the Shadow Broker in 2185," poster UnnamedNamesake noted. "The initiative set out for Andromeda before or during the events of Mass Effect 2."

Another frontrunner for the title of the Benefactor is the Illusive Man, leader of the Humanity-centric Cerberus Organization and Shepard's handler in Mass Effect 2. Although many players are hopeful that the Illusive Man would be behind the Andromeda Initiative, there are a few problems with that.

First, as shown in Video Game Sophistry's YouTube video of Alec Ryder — the player's father — and his first interaction with the Benefactor, they speak to him using a female (or female-sounding) voice, so that would raise more questions about why the Illusive Man would hide his voice (especially since he's voiced by Martin Sheen).

Additionally, something that would complicate both the Illusive Man and the Shadow Broker's place as the Benefactor is that the Benefactor is very probably in the Andromeda Galaxy itself along with the rest of the Initiative.

"As much as I want it to be the Illusive Man, I suspect that the Benefactor went with the AI to Andromeda, why else would they have bothered to assassinate Jien?" user Balgruufgat wrote. "The Benefactor would likely be long dead by the time the AI got to Andromeda, unless they're an Asari or Krogan."

It's very probable. During an interview with Forbes, Michael Gamble, Andromeda's producer, had this to say about the Benefactor:

The mysterious Benefactor is intentionally left unresolved, as it has deeper ties to the metastory of the 'Mass Effect: Andromeda' saga. By the time you find the killer, they're long gone...

As with many of Gamble's answers in this interview, his cagey response regarding a lot of the game's unresolved plot threads would point to the Benefactor having a bigger role in either downloadable content or an eventual sequel.

If this is the case, the Benefactor is probably a new character, or one who's been teased only slightly. We know Liara isn't in Andromeda (since she fought alongside Shepard in Mass Effect 3, after the Andromeda Initiative leaves) nor is the Illusive Man (who dies at the end of Mass Effect 3), chances are good that if Gamble and the rest of the Andromeda team are saving the Benefactor's identity for a surprise reveal, it's a character we haven't seen yet.

Here's hoping the reveal lives up to all the speculation.