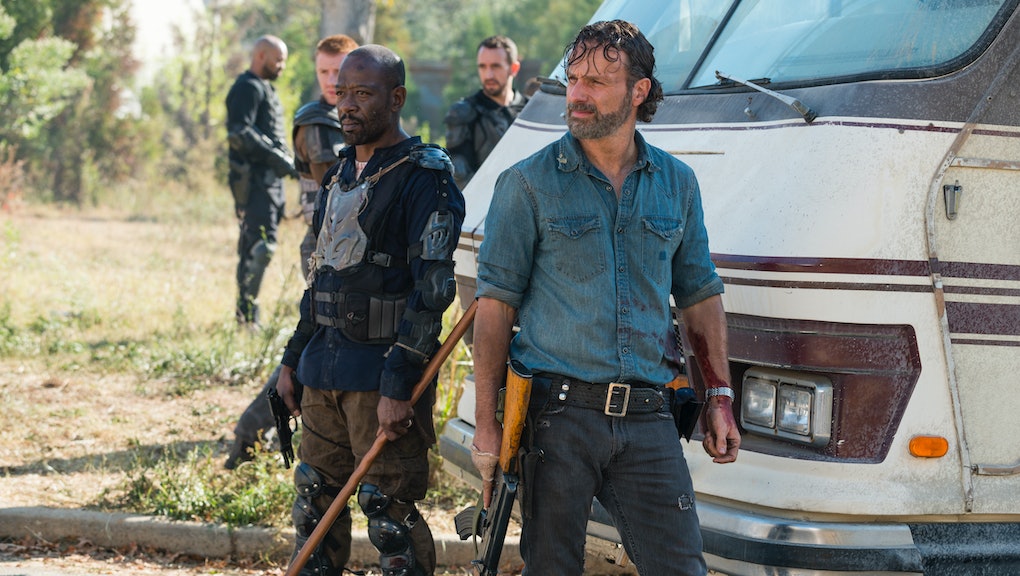 The Walking Dead wrapped up its seventh season Sunday, with an action-packed finale where a CGI tiger mauled two Saviors to death as Rick and the rest of Alexandria finally clashed against Negan and the Saviors. It's an unwritten television rule that any effective use of a CGI tiger means said episode of television isn't a total disaster. So even though The Walking Dead didn't address Gregory leaving the Hilltop, or whatever Heath has been doing for the past half season (short answer: 24: Legacy), the series wrapped up season seven on an encouraging note.

Now, it would be one thing if the critics hated the show but it was still a hit — look at, of all things, Netflix's Iron Fist. However, viewers responded to the dip in quality by not showing up. The series hit its lowest ratings in years, which is the first sign The Walking Dead might actually be vulnerable in the long term. In other words, AMC might've ended season seven on a promising note, but they've still got work to do heading into season eight.

Though there's myriad problems the show has to deal with, there's an easy solution for its storytelling: Divert from the comics and tell your own story.

Since Walking Dead showrunner Scott Gimple took the reigns in season four, the show has mostly stayed true to its comic book source material. That's not necessarily a bad thing, but it has increasingly come at the expense of coherent storytelling. Characters have to make decisions that are privy to the plot, even if they don't make sense for them on a personal level: Think of Sasha and Rosita's suicide mission to assassinate Negan, which we all knew wasn't going to succeed.

It's also led the show to predictable routes, because they've been telegraphed and adapted so faithfully. We all knew Spencer had guts, and that Sasha's death was going to mirror Holly's from the comics. It's not that we don't need these big comic book moments — again, if they didn't have Negan kill someone with his baseball bat, it would be akin to Game of Thrones slashing the Red Wedding from its storyline — but it hinders what The Walking Dead is able to accomplish. Certain characters might have to live, for instance, so they can be positioned for future plotlines, while others have to die at the service of the comics, because this is where they meet their end.

It's ironic too because The Walking Dead still has some good characters, like the emotionally complex arcs surrounding Morgan and Carol at the Kingdom. The commonality between them? They're both dead in the comics, which means the show has forced itself into giving them new material to work with. The best episode of season seven revolved around Morgan's pacifism in the zombie apocalypse, and just how fractured his mental state is despite his exterior portrayal of zen. Carol's had less to do this year, but her transformation into a hardened badass has been immensely satisfying television over multiple seasons.

Really, The Walking Dead should take a page out of Game of Thrones' book. Not that Game of Thrones has ever been a bad TV show (it's worst year was probably season five, and it still won a lot of Emmys), but George R.R. Martin's procrastination forced the series to move on without its source material in season six. That was to the show's advantage, as it was able to move the story forward at a breakneck pace.

Of course, regardless of what happens in season eight, The Walking Dead will be adapting the "All Out War" arc from the comics. And that's not a bad place to be, considering its title already intimates a lot of on-screen action, and it's in their best interest to satisfy a dwindling fan base with moments like Sunday's finale, where a damn tiger ate someone's face off.

But when push comes to shove, The Walking Dead shouldn't be afraid to stand on its own feet. Is Eugene's heel turn legit? Keep it that way and see where it goes. Aaron's boyfriend Eric is supposed to die during the war? Keep him alive and give him some semblance of character development. Jerry, the cobbler lord of the Kingdom? Don't you dare fucking kill him.

On the basis of its ratings alone — which are still stellar, mind you, despite the dip — The Walking Dead has the opportunity to fix itself before even more viewers jump ship. This is something AMC shouldn't take for granted; it's still a beloved show that doesn't deserve such a devoted fanbase after treating them like shit for so long (i.e. Glenn and the dumpster and the Negan cliffhanger). The least they can do is reward its fans with original, ambitious storytelling, even if it doesn't always work.