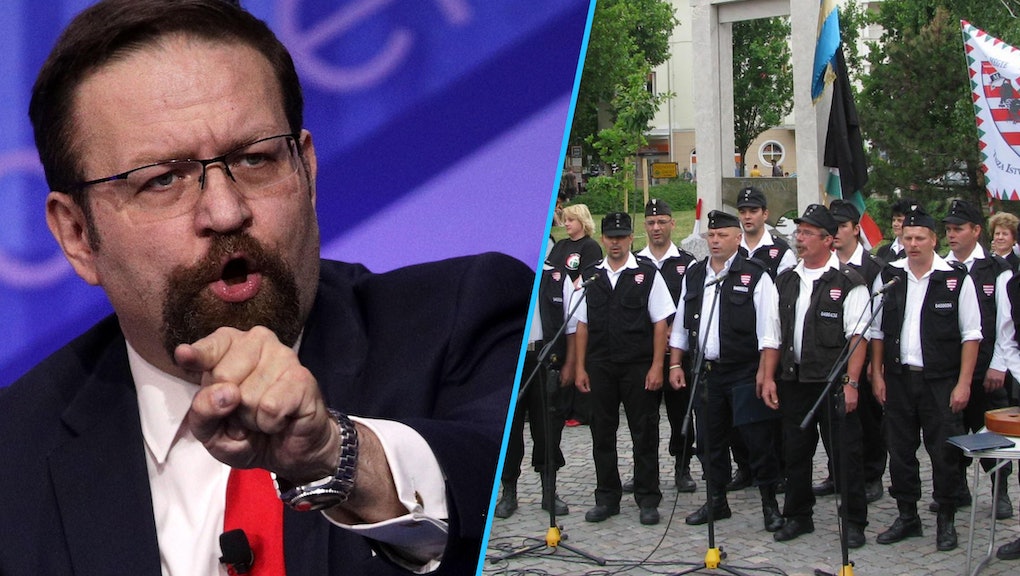 Sebastian Gorka, a deputy assistant to President Donald Trump who has come under fire for his ties to a far-right Hungarian group, explicitly endorsed a racist, anti-Semitic militia group while building a failed Hungarian political party in 2007, the Forward reported Monday.

In the 2007 Echo TV interview, given while Gorka was trying to launch a Hungarian political party called the New Democratic Coalition with members of radical nationalist group Jobbik, Gorka offered his support for Jobbik's notorious Hungarian Guard (Magyar Gárda) militia.

Gorka told a TV interviewer it "is so" that he supported the Guard. He added its formation was a response to a "big societal need" and Hungary's military was "sick, and totally reflects the state of Hungarian society ... This country cannot defend itself."

While Gorka said he supported the militia, he also tried to distance himself from it, saying it was a joint initiative of Jobbik and Hungary's less extreme Fidesz party.

"I'm not saying it's a good solution, but neither shooting training nor using the Arpad flag [is] unconstitutional," Gorka said, referring to the Guard's use of a symbol of the Arrow Cross, a collaborationist group that murdered thousands of Hungarian Jews during World War II.

"When the police shows up to deal with bank robbers in black uniforms, who talks about a fascist police in Hungary? Nobody! Now, it is possible that when they put together all these things, the effect in the end will be very bad, but it's not my problem. It would be Fidesz and Jobbik's problem."

Hungary eventually banned the Guard in 2009 after it staged anti-Roma marches throughout the country, and two of its members were later linked to murders of Roma in 2008 and 2009, the Forward reported.

The latest revelation builds on prior reporting about Gorka's ties to far-right Hungarian groups generally recognized as racist or neo-fascist. Gorka published articles in a far-right paper named Magyar Demokrata known for its anti-Semitic and racist content, according to the Forward, and during Trump's inaugural festivities wore a medal associated with Nazi collaborator group Vitézi Rend. It later emerged Gorka may actually be a sworn member of Vitézi Rend, which is on an official State Department list of Nazi-tied organizations used to deny immigration privileges to members.

Jonathan Greenblatt, CEO of the Anti-Defamation League, called the allegation "shocking" in a tweet on Monday.

Gorka's far-right ties should probably be raising some eyebrows, given in different interviews he refused to acknowledge Islam is a religion and denied there was anything untoward about leaving Jews out of Trump's statement on Holocaust Remembrance Day. Counterterrorism experts including Michael S. Smith II have questioned Gorka's qualifications, while others have questioned the quality of Gorka's academic research on terrorism.