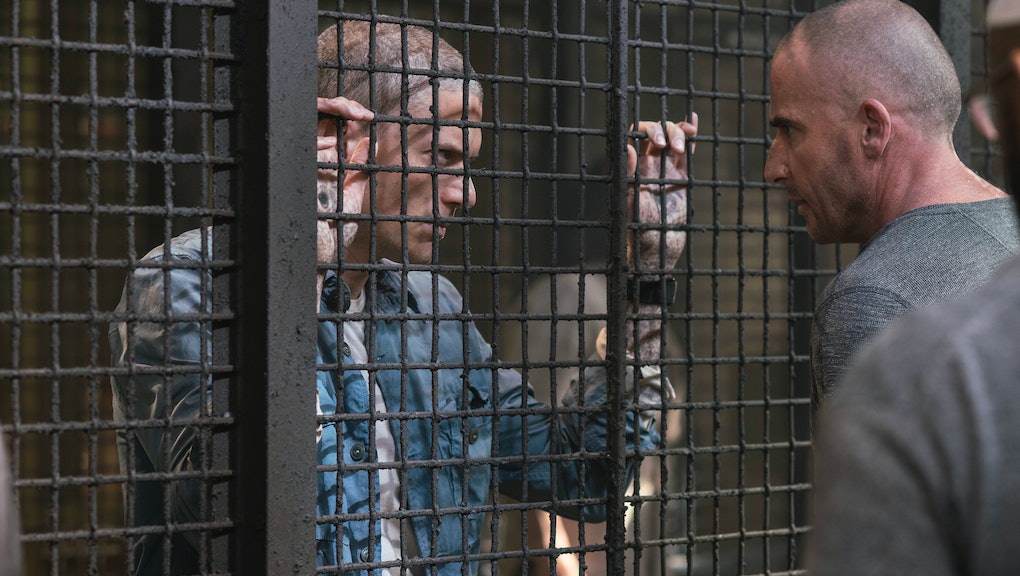 'Prison Break' season 5, episode 1 will leave you with a lot of questions about Michael

In the first episode of Prison Break season five a mother promises her small child she'll impale an intruder, another character survives a car crash because they weren't wearing a seatbelt, and a convicted white supremacist pedophile gets a cutting-edge robo-hand from a generous anonymous benefactor. To viewers familiar with the Prison Break series, none of this will seem particularly implausible, and watching it will probably be fun as hell.

Prison Break has always presented something of a dilemma for writers. Where does the Prison Break story go once the prisoners in question have been sprung? In classic films like The Shawshank Redemption or The Great Escape, prisoners either beat the system or courageously die trying. It's hard to see how you can sustain that plot line indefinitely, as serialized TV often demands.

In Prison Break, which ran on Fox for four seasons between 2005 and 2009, the answer has usually been to throw the prisoners back in jail. That has been the case with the poor, ennobled Prison Break protagonist Michael Scofield, who in the season five premiere now finds himself in a new facility, this time in Yemen. The episode one title, "Ogygia," is the name of the facility where Michael is now being held captive.

People who watched Prison Break's conclusion will probably need a bit of a catch up. The show had a fair bit of resolution as far as TV dramas go: In the series finale, Michael's nose begins to bleed, which suggests his impending demise from hypothalamic hamartoma. In a follow-up made-for-TV movie, we eventually see his gravestone. He's dead — the writers even said as much in media interviews.

So the fact that Scofield is even alive at all is an illustration of how Prison Break deals with the truth. "Not all deaths are the same: Some are real, some are a story," Michael says in the season five opener's wind-up. The viewer gets to choose what they want to believe.

And if you like Prison Break, you will almost certainly find lots to like about the first episode. A lot went down, and not a lot has changed in the last seven years. Sarah, Michael's physician in prison who eventually becomes his love-interest and the mother of his child, has moved on. Lincoln, Michael's brother who he broke into jail for, has wracked up what seem like gambling debts. Sucre is still sweetly loyal and a little bit incompetent.

Theodore "T-Bag" Bagwell is back as well, and seems likely to be featured prominently in the upcoming season. He is the first character to get evidence that Michael is still alive, something that makes no sense. He's also the one that receives the aforementioned robo-hand. The fact that Bagwell is even released from prison at all — given that his jail-break resulted in multiple lifetime sentences — stretches credulity. But actor Robert Knepper is still so creepy and good that you go with it.

In the season five premiere, Bagwell quickly cues Lincoln to the fact that Michael may still be alive. Lincoln unearths his grave to find a dummy corpse buried. Lincoln recruits C-Note — who served a tour in Iraq and has in the intervening seven years conveniently found Islam — to bring him to Yemen and track Michael down. After an almost instantaneous kidnapping, Lincoln and C-Note fight their way out and end up trading their passports for access to Ogygia, where Michael pretends, laboriously, not to recognize them.

There are predictably a lot of questions. What happened to Michael's brain tumor? And who is pulling this conspiracy off now that the mysterious "Company," who orchestrated Lincoln's framing, has been presumably brought down? Why do the assassins who try to take out both Sarah and Lincoln in the season five premiere do such a terrible job?

People new to the series will likely have a hard time seeing why they should bother sticking around for the answers. When it premiered, Prison Break had debatably progressive politics — hardly anyone in Fox River was without a sympathetic backstory. People weren't in prison because they were bad; all that separated them from their gainfully employed, often-drug taking, and type-A counterparts were circumstances.

This time around, Prison Break's politics seem dated. "It's no place for white men," C-Note says to Lincoln about Yemen. "[Trust] doesn't seem to mean a lot in this country," he says later.

But old fans will be right at home.