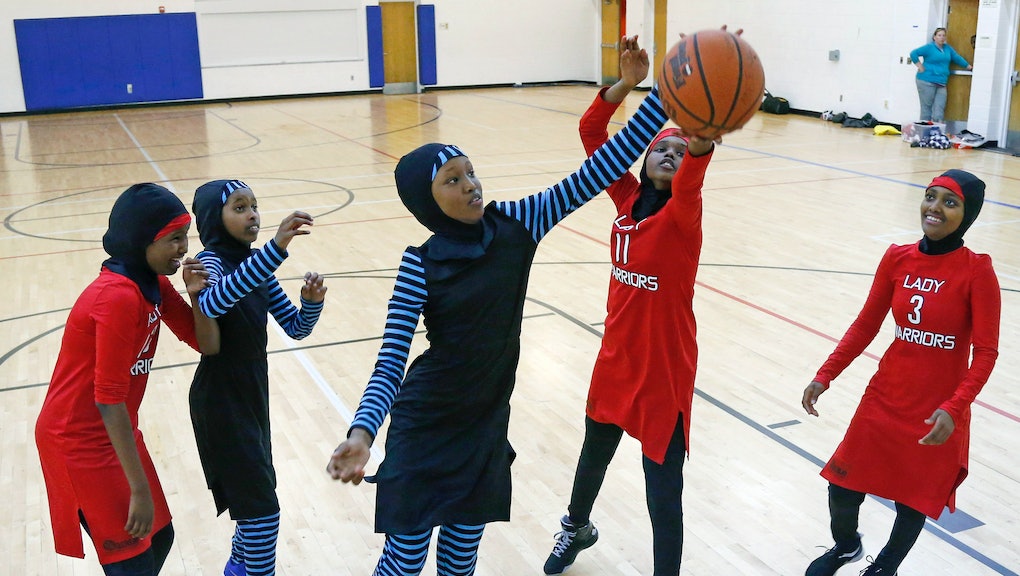 The Maryland Public Secondary Schools Athletic Association has reversed its hijab ban for high school athletes, after officials benched a 16-year-old Muslim student for wearing the hijab at the regional basketball finals.

Under the new policy, high school athletes are allowed to wear their religious head coverings as long as it's not "abrasive, hard or dangerous to any player/others." The former policy required students to provide "documented evidence" to wear religious garments during sport tournaments.

"Any participant may wear a head covering, wrap or other required religious garment which is not abrasive, hard or dangerous to any player/others, and is attached in such a way that it is unlikely to come off during play," the new policy reads.

The policy change was enacted after news broke out that Watkins Mill High School student athlete Je'Nan Hayes was benched by her coach in the final quarter of the state's basketball regional finals.

"My coach had pulled me aside, and she had said that she was sorry that I couldn't play," Hayes told WTOP. But there was a state rule saying that I have to have a letter to play with my hijab on."

In all of her two years of coaching, Donita Adams — Hayes' coach — had not heard of the hijab ban until a referee informed her the Muslim teen would need an exemption letter from the state to receive religious accommodation during the basketball game.

"I didn't agree with what was going on," Adams told WTOP. "She played all 24 games and then on the 25th game she wasn't able to play."

The original policy was introduced and implemented under the National Federation of State High School Association, but the rule is enforced on the state level. In March, the Montgomery County Board of Education to send a letter to the MPSSAA and the NFSHSA to reverse the rule.

"This letter shows that we are in support of diversity, and respect all religions and backgrounds," board member Patricia O'Neill told Gaithersburg Patch. "We want to make sure that all students ... who have certain attire based on their faiths are not prevented from engaging in extracurricular activities."

The Council of American Islamic Relations, the nation's largest Muslim civil rights group, led an intervention on behalf of Hayes. The organization released a statement welcoming the new policy.

"We welcome this change in policy, which will enable more Muslim high school students — as well as students of other faiths — to participate in athletic activities," Dr. Zainab Chaudry, CAIR's Maryland Outreach Manager, said. "Religion should never be a factor in the ability to play sports. We encourage the National Federation of State High School Associations, of which MPSSAA is a member, to adopt a similar policy change."

Hayes isn't the first female Muslim student in the United States to have been discriminated for wearing the hijab. In January 2008, a high school senior from Washington, D.C.'s Theodore Roosevelt High School was disqualified from an indoor track meet for wearing her hijab.

According to a 2007 CAIR report, in June 2006, a music teacher at an elementary school in Jacksonville, Florida, refused to let a 10-year-old Muslim student who wore the hijab to play in a school concert. In 2004, the Justice Department filed a complaint against Benjamin Franklin Science Academy in Muskogee, Oklahoma, for suspending a sixth-grade Muslim student for refusing to remove her hijab. The school claimed that the hijab was in violation of its dress code policy.

From Nike's Pro Hijab to the International Basketball Federation reversing its hijab ban, the MPSSAA's new policy signals a new shift in embracing and accepting female Muslim athletes in the athletic arena. It's about time.