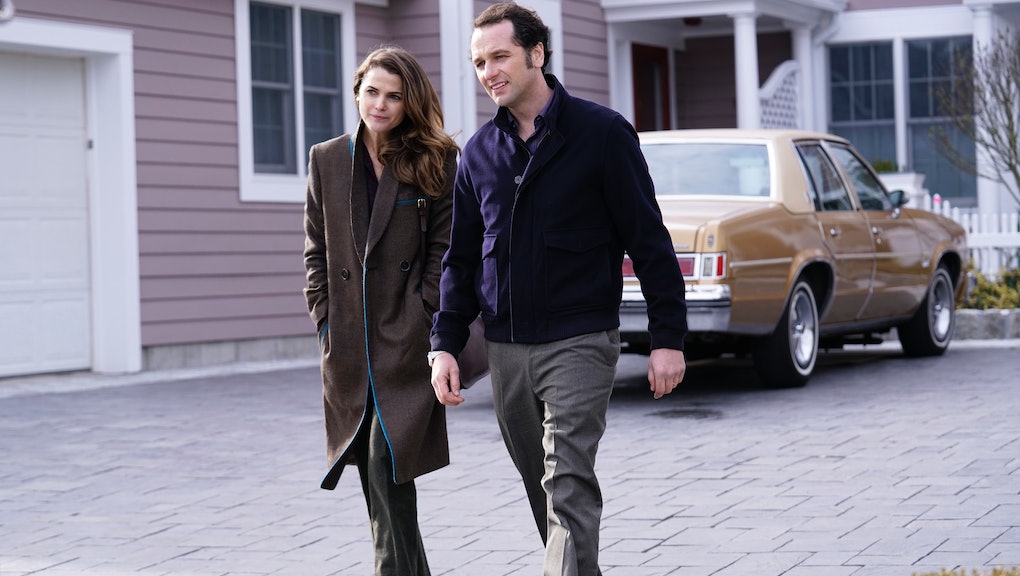 For a show dealing with the idea of starvation, there sure was a lot of comforting food imagery in episode 5 of The Americans, titled "Lotus 1-2-3." Remember that evening out at Bennigan's? Turns out that was just a mere appetizer. The latest season 5 installment was a multicourse entrée featuring Chinese food, vintage 1980s McDonald's and an elaborate Russian meal prepared by three potential brides. Ben Stobert's Egyptian-themed dinner for Elizabeth's "Brenda" (still killing it in her patterned tights and chevron-print wrap dress) topped it all off with a decadent dessert of indoor s'mores.

The overabundance of food helped to drive home the painful understanding that Philip and Elizabeth have apparently been chasing a phantom this season: While continuing her honeytrap of Agricorp scientist Stobert out in Topeka, Kansas, Elizabeth learns that this hiking, gorp-eating, globe-trotting former Peace Corps worker is fighting to end starvation. He's developing crops that can withstand the worst kinds of pests. So those awful bugs that were being bred in the second and third episodes? Their role is to test this new kind of grain, not starve people to death. The way Keri Russell's face falls as Elizabeth realizes she's actually wrong about something is perfectly executed, though it's yet another example of how she and Philip are slipping more and more this season. Come on, Liz, you really thought that someone as crunchy as Ben Stobert was out to deprive people of food?

The food imagery also provided a powerful contrast to Philip's ever-growing flashbacks to when he was a starving child in the Soviet Union (that rock-like brown bread would cause nightmares for anyone), necessitating his return to EST meetings. We've known since the earlier seasons of The Americans that Philip Jennings is one murder-on-the-job away from total self-destruction, and once again, it looks like he's treading dangerously close to an all-out breakdown. He's somehow been able to keep it together up until now (thanks to EST, at least partially), but the other shoe is going to drop eventually, especially considering how much is stacked up against him at the moment:

With Elizabeth off in Topeka tossing back glass after glass of Egyptian wine, Philip is the one left behind dealing with the downside of bringing Paige into the KGB fold. I have to say, I really like how one week the teen is exhilarated over being a part of the spy game, and the next she's depressed — it's far more believable that way. So instead of gushing to her mother about everything she found in Pastor Tim's diary, this week Paige is confessing to her father how miserable she is, which only makes Philip feel guilty about his life's work. Both father and daughter exhibit palpable sadness over their Chinese food dinner as Paige admits that "with all the garbage" in her life, having a boyfriend like Matthew should make her feel better, but it doesn't. Poor Philip looks as if he's going to crumble when Paige tells him that she's so "screwed up" that now she fears she's "meant to be alone." He knows his daughter's misery is the direct result of what she knows and of the sheer fact that he is a Soviet agent, and it's killing him inside.

Ironically, the more unhappy Paige is, the more successful she's gotten at mastering that distraction technique, which could prove to be more dangerous than anything else. Later in the episode, her horny boyfriend Matthew confronts her over how distant she's been lately, basically complaining that they haven't gotten physical in two weeks ("being alone" is the euphemism here). When he asks if she wants to break up, putting even more pressure on her, Paige subtly rubs her thumb and forefinger together — and it works, again. She immediately changes the subject to how she's just inexperienced when it comes to being with a boy. But what worries me the most about how well Paige was able to switch gears here is that she could be slowly turning into Elizabeth — someone who, as viewers have known since the series premiered, has lost a large part of her humanity working for the KGB.

So when Elizabeth returns home and breaks the news to her husband that the lab worker they killed in Oklahoma (RIP, Randy) lost his life for no reason, Philip shuts down. Later on, dressed as Brad and Dee Eckert (this is how messed up their lives have become — they are forced to have some of their most serious conversations literally in disguise), they address their latest casualty, and Philip puts his foot down when it comes to such a fatal mistake: "That guy in the lab? That can't happen ever again."

Philip reminds his wife that "this has been hard for me for a long time," with Elizabeth looking genuinely worried — about herself, Philip, their family and the future of the Soviet Union. She offers to do the killing for him (there's that lost humanity again), but that's not the answer. "It's us, Elizabeth," he says. "It's us." It's a great final line of dialogue, because it's open to so much interpretation. By "us" does he mean the Soviet Union? Is he going back to his pilot-episode suggestion of defecting? Or does he mean that they as a team just have to stop murdering people? Aside from the whole moral quandary element, given how fragile Paige is, we know Philip is already rather fearful of her finding out about that occupational hazard.

— "Lotus 1-2-3" was directed by Noah Emmerich (aka Stan Beeman). Over the past few seasons, it's become the actor's signature to put one of the best music cues of the season in the episode he directs. In season 3 it was Fleetwood Mac's "The Chain," and season 4 it was the Queen/David Bowie track "Under Pressure." This time, it was "Slave," by the Rolling Stones. Set to a montage of Philip as Brad playing touch football with Tuan and Elizabeth as Brenda having sex with Ben Stobert, it demonstrates how they are both slaves to their job. Philip is also still stuck seducing Deirdre Kemp, a woman so boring she gets off on chatting about spreadsheets like Lotus 1-2-3, hence the episode's title. Whereas Elizabeth's fake moans with Stobert are interspersed with her scans of his bedroom.

— I am majorly intrigued by this new Henry story line that has his math teacher drop the bombshell that the formerly MIA Jennings kid is doing so well he's being moved into an advanced class. We don't get too far with this subplot, and given how often Henry's just not around — and that he doesn't know the truth about his parents — I am all in. There's something definitely up here, because even though Philip and Elizabeth haven't seen Henry in what feels like two seasons, they're good enough spies that they have enough reason to be skeptical/excited. See, Henry is never seen studying, which begs the question that he's cheating. But if he's that smooth, then perhaps they have another budding spy in the family!

— Oleg is still in Moscow and now being thrust into a meat market of marriageable ladies found by his father. When Oleg resists, his dad remarks how he's as "stubborn" as his mother. Considering what we now know about Yelena, it's not impossible that Igor Burov would send his son to a camp, too. So it's not surprising that Oleg once and for all pulled out that map and went to the rendezvous point to meet with American intelligence.

— Philip is on to Stan's new girlfriend, Renee. No, really — he follows the two of them during a date in one of his many Professor Beardy McBeardson disguises because, like I suggested a couple of weeks ago, he suspects Renee could be a member of Directorate S. The Centre knows Stan is vulnerable. Why? Because Philip has riddled his reports with valuable intel on his next-door neighbor.

— Finally, Mischa has arrived in Washington, D.C. and had his long-awaited reunion with ... Gabriel. Yeah, he's not gonna cross paths with Philip anytime soon: If The Americans is going to throw something at Philip that will push him over the edge, it won't be until the end of the season. Basically, Mischa is screwed, because his coded message to his father was intercepted by the Jennings' handler, and Gabriel (thanks to some serious meddling by Margo Martindale's cool and calculating Claudia) is going to ensure that this kind of family meeting never happens on American soil. The children may be our future, but in Mischa's case, he's got it worse than anyone right now, even Paige. The poor kid is stuck in America, with limited English skills and resources. Not to mention he's a liability to the Soviet Union, having spoken out against the war in Afghanistan.