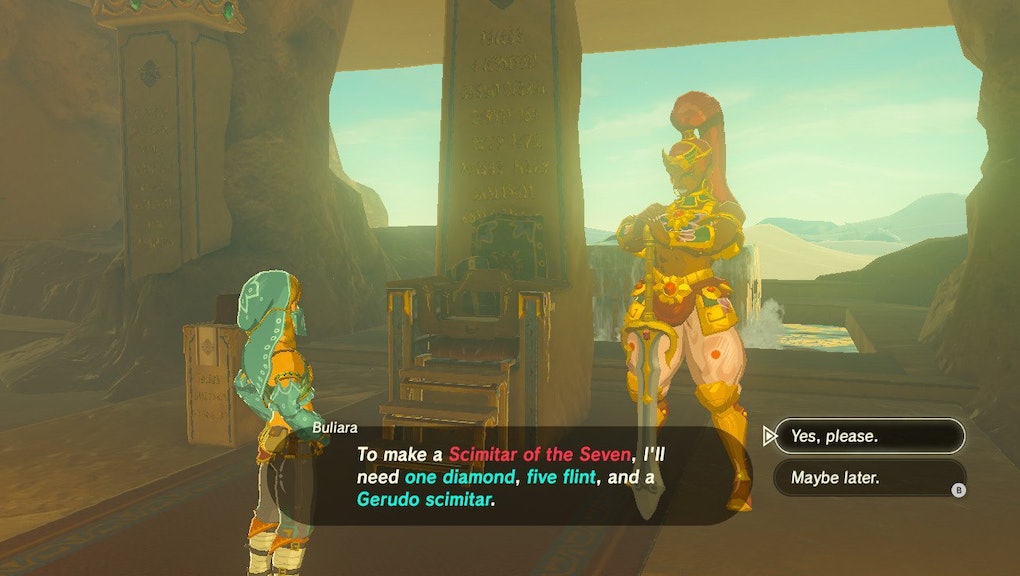 'Zelda: Breath of the Wild' Weapon Crafting: How to repair all the champion weapons

The fact your weapons constantly break in The Legend of Zelda: Breath of the Wild is a real pain. What the heck is wrong with the blacksmiths in Hyrule? Thankfully, the game does include weapon crafting, but it's limited to just a few legendary items.

There are actually just four people in all of Hyrule who know how to repair and craft weapons, but each of them can only repair one weapon apiece. Yeah, I don't know what's going on with these chuckleheads, either.

Repairs are also limited to the four champion weapons. You receive one from each of the four tribes after you finish the four Divine Beast dungeons. They're powerful, but like almost every weapon in the game, they can break. What makes them special is the fact you can repair them — if you have the resources.

Zelda: Breath of the Wild Weapon Crafting: How to repair the Lightscale Trident

If you've broken the Lightscale Trident you get for completing the Zora dungeon, talk to the elderly Zora blacksmith in the back of the general store in Zora's Domain. To repair it, he'll need a generic Zora Spear, five flint and a diamond.

There's a Zora Spear in the water behind the large staircase leading up to the Zora king's chamber. You can retrieve it with magnesis. Flint can be found in ore deposits all around the world, and you can exchange 10 luminous stones for a diamond in Zora's Domain.

Zelda: Breath of the Wild Weapon Crafting: How to repair the Scimitar of the Seven

Urbosa's one-handed sword can be repaired if you have a diamond, five flint and a Gerudo Scimitar. The Gerudo Scimitar can be found on a bundle of boxes immediately to the left of the entrance to Gerudo Town and up a small set of stairs. Once you have all that, take it to the guard standing next to the throne in Gerudo Town — she'll give you a new Scimitar of the Seven in return.

Zelda: Breath of the Wild Weapon Crafting: How to repair the Boulder Breaker

Completing the Goron dungeon in Death Mountain will net you a powerful, two-handed blunt weapon called the Boulder Breaker. To repair it, head to the blacksmith in Goron City. He lives in a house surrounded by a mote of lava on the northeastern edge of the city. You'll need a diamond, five flint and a Cobble Crusher.

The Cobble Crusher can be found leaning against Goron City's southeasternmost house.

Zelda: Breath of the Wild Weapon Crafting: How to repair the Great Eagle Bow

Revali's powerful bow is a reward for completing the Rito dungeon in northwestern Hyrule. If yours breaks, take it to Harth in Rito Village. He's sitting on the floor in a house near the top of the village's distinctive wooden spiral structure. Harth will demand a diamond, five bundles of wood and a Swallow Bow.

Cut down trees to get the wood and pick up the Swallow Bow sitting on the table right next to him. Yeah, they didn't even try to hide this one.

Find out all there is to know about Zelda: Breath of the Wild, including if the giant world of Hyrule even has any people of color. Learn how to preserve your items, how to beat bosses like the Stone Talus and Lynel, the best recipes for Link and how to take on the game's shrines. If you're looking to snag a giant horse with little stamina, here's how to do it. You'll also want to find out where all the great fairies are in the game, how to use amiibo with your version of Zelda and what went into making Breath of the Wild.