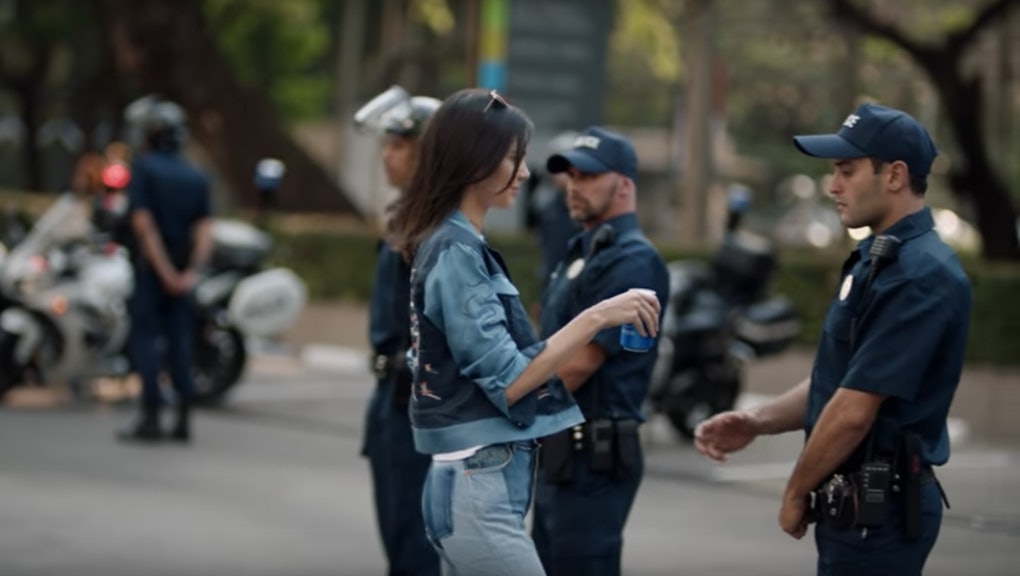 The video is a culmination of scenes you'd imagine an alien trying to understand America's current, volatile political climate might pull together. Two millennial women are shown eating brunch (classic) while a mass of young people march in protest, holding poster boards with vague messages of unity – including images of peace symbols and words like "love." The shots take the concept of "protest as the new brunch" a bit too literally.

There's a skeleton of a meaningful plot in this video, but the devil's in the details. There's a protest, but its cause is unknown. The protest's champion is a white woman who, with help from a supporting cast made up of people of color, achieves justice for all. While the imagery is certainly reminiscent of the vast acts of resistance of 2017, the video uses marching as a means to reach one ultimate solution: Pepsi will unify us all.

Skip Marley's "Lions" is the anthem of the video, a song, when paired with this messaging, has painfully transparent lyrics. "We are the movement, this generation/You better know who we are," plays over the group of energetic marchers.

Amid the mass protest, Jenner is shown posing in a jazzy silver dress and a blonde wig. When she suddenly makes eye contact with a member of the crowd, she experiences a come-to-Jesus moment in which she realizes, she, too, is part of The Resistance. Jenner pulls back her wig and smears away her dark lipstick to reveal her true self: A barefaced millennial, woke and part of the movement.

Second to Jenner, a protagonist of Pepsi's video is a hijab-wearing brown-skinned photographer (Did we cover Islamaphobia as an issue? Check!), who finds peace at the end of the clip when she finally captures "the moment": Jenner gifting a person of authority, ostensibly a police officer, a can of Pepsi.

And the crowd goes wild.

The can hand-off is a peace offering, a parable that seems to say: We're all the same because we all enjoy Pepsi. It's this moment where Pepsi explicitly exploits The Resistance.

"The 'Jump In' Pepsi Moments film takes a more progressive approach to truly reflect today's generation and what living for now looks like," PepsiCo's press release reads. "Kendall is the latest in an impactful line-up of global icons to work with Pepsi and she exemplifies owning 'Live For Now' moments."

Living for now, Pepsi suggests, is fighting for a cause. But the company refuses to dive completely in, which implies that ascribing an actual cause of the protest would be too risqué for a brand. The decision speaks volumes: Pepsi is a corporate brand first, and cares about relating to a new generation second.

Of course, people on Twitter called out the brand's epic fails with biting and sometimes hilarious tweets:

Pepsi is, hardly the first to use activism in its branding. The company's direct rival, Coca-Cola, received praise (and on the other side, boycotts) for its inclusive "It's Beautiful" ad that played during the 2017 Super Bowl. The 30-second spot spans across a diverse America while playing "America the Beautiful," sung in multiple languages. Sure, Coke bottles appear in the commercial, but they serve more as a backdrop for togetherness, rather than the force that brings people together.

Brands know that millennials gravitate toward authenticity, but Gen Y also has a keen eye for spotting inorganic content. With this failed attempt to reach a young audience, Pepsi should learn one key thing: When you're way too thirsty to be relatable, it shows.

In a statement released Wednesday afternoon, Pepsi issued an official apology — to the world, and to Kendall Jenner — and pulled the video. According to the Daily Beast, the apology reads:

Pepsi was trying to project a global a message of unity, peace and understanding. Clearly, we missed the mark, and we apologize. We did not intend to make light of any serious issue. We are pulling the content and halting any further rollout. We also apologize for putting Kendall Jenner in this position.