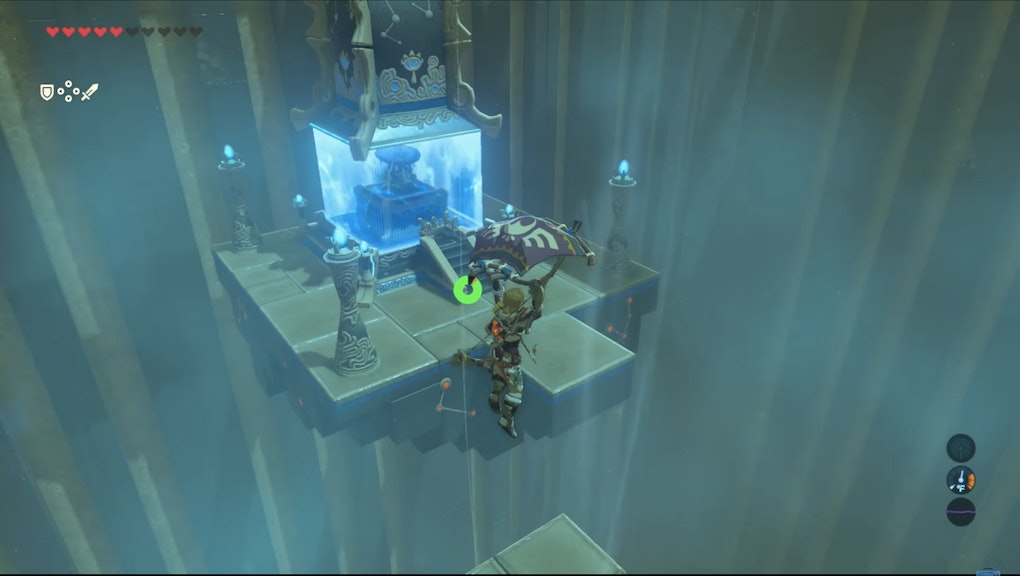 'Zelda: Breath of the Wild' Sha Warvo Shrine Guide: How to solve "Path of Hidden Flights"

Legend of Zelda: Breath of the Wild eschews a lot of the traditional Zelda narrative tropes by avoiding having the bulk of the game happen in dungeons. Sure there are still the four Divine Beasts you're supposed to purify in order to beat the game, but the bulk of the game's progression takes place in the overworld of Hyrule and in mini-dungeons called shrines. One shrine in particular, Sha Warvo, and its inbuilt challenge "Path of Hidden Flights" tests your ability to use the paraglider you got at the end of the Great Plateau.

If you're a little uncertain on how to solve "Path of Hidden Flights" trial at Sha Warvo Shrine in Zelda: Breath of the Wild we've taken the liberty of figuring it out for you.

Zelda: Breath of the Wild Sha Warvo Shrine guide: Location and solution to the puzzle

You can find the Sha Warvo Shrine north of the Rito Village on the outskirts of the Flight Range to the north of Lake Totori, according to IGN. There's no quest to unlock it so just head right in as soon as you're ready.

The shrine itself tasks you with using your paraglider to ascend up a series of vertical platforms stationed over a giant pit using the updrafts provided. Once you hit the first platform above where you started, Blue Television Games recommends equipping a strong weapon — pick an ancient weapon if possible. The reason you want to do this is because there's a guardian scout waiting for you on the next platform, which is very narrow.

Taking the guardian scout out quickly is going to be your best bet since maneuverability is limited. IGN also recommends snapping a picture of the scout with your Sheikah Slate before you destroy it if possible — having a picture of it on-hand will save you the hassle of tracking one down for a quest later in the game. Make sure you grab the purple rupee in the chest it was guarding and then jump back onto the fan you were just on to take it over to a platform on the other side of the chest with the rupees.

Once you're on that platform, things start to get a little trickier. Stand facing the elevator back up to the surface while on the platform you just landed on. Then  use your paraglider on the updraft and you should see a small obelisk with a ladder on it. You'll need to time it so that you land on a small moving platform that joins up with that obelisk, allowing you to climb up the ladder.

On the top of the platform, you should see another fan and another outcropping covered in the constellations you've seen in other shrines. Although it looks like there's nowhere to go, if you fly around to the left side of the constellation studded outcropping, you should see a small entrance on the back of it with another fan inside. Rest on top of the fan if you need to, then take your paraglider up to the top.

Once you're on top of the constellation structure, you should see the monk's platform. Before you grab your spirit orb, fly off to the far corner of the shrine's challenge where you should see a chest sitting on a small platform. If you fly over to it, you're rewarded with a knight's bow, a powerful ranged weapon. Once you do that, you can glide back down to one of the lower platforms and make your way back to the final air funnel.

All in all, Sha Warvo's not too bad as long as you're comfortable using the paraglider. So enjoy your spirit orb, purple rupee and knight's bow.

Find out all there is to know about Zelda: Breath of the Wild, including what to expect from the Wii U version, how to preserve your items, how to beat bosses like the Stone Talus, Lynel, the Guardians and the Hinox, the best recipes for Link, how to take on the game's shrines and our coverage of the game's outfits, like the Climbing Set, the two sets of heat resistance armor you can find and how to dress Link in the classic green tunic. You'll also want to find out where all the great fairies are in the game, all available stables, how to use amiibo with your version of Zelda and how to increase your health, stamina and weapon slots.