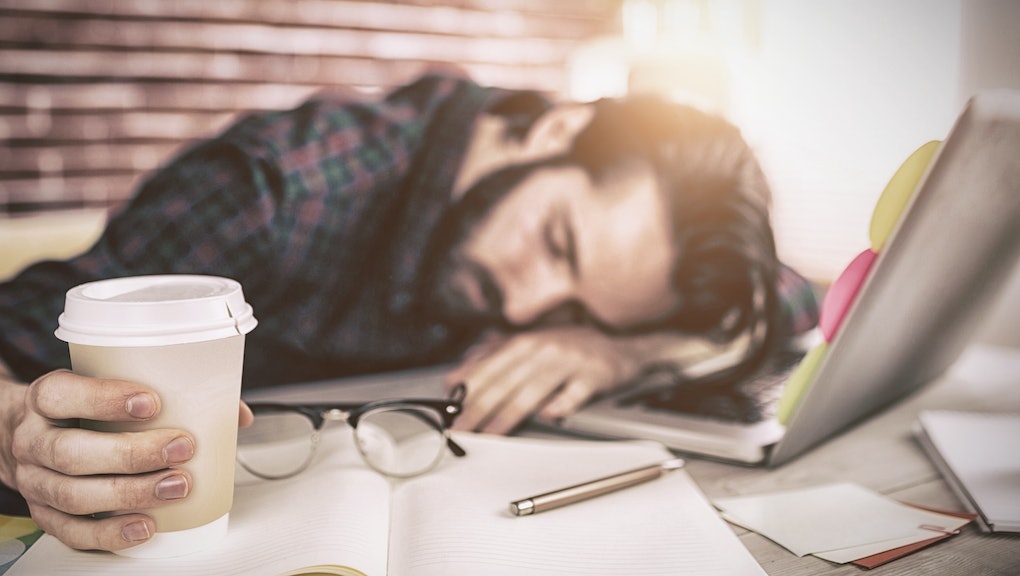 Can marijuana give you a hangover? Here's how weed could ruin the morning after.

I was rather surprised, not long ago, when a friend declined to smoke weed with me: It wasn't because he doesn't enjoy it, but because of its residual effects. "It'll throw my whole morning off," he said, describing the foggy sort of hangovers he'd suffered the last few times he'd indulged in a late-night joint.

This runs counter to a commonplace belief among the marijuana-friendly set — namely, that a weed high comes without a hangover the next day. The notion seems to follow from the understanding that alcohol is, between the brain damage and potential fatal overdoses, a more harmful intoxicant than cannabis.

Here, for example, is an amusing Snoop Dogg GIF that purports to show the difference between an alcohol hangover and a weed hangover, at least according to some stoners on Reddit's r/see forum:

But the truth, as my pal discovered, is a bit more complicated. Yes, the marijuana hangover is real — and you might have had one or two already.

How could marijuana cause a hangover?

If we define a "hangover" as any lingering influence a drug continues to exert on our body and brain the following morning, then it seems clear that the marijuana hangover — even if it's nowhere near as unpleasant as waking up after a night of tequila shots — is a genuine phenomenon.

Why? Because THC, or tetrahydrocannabinol, the psychoactive compound in weed that gets you high, is a fat-soluble chemical that the body stores for days. Simple exercise can release some of this THC back into the bloodstream long after consumption, and habitual, regular smokers may have a near-constant level of THC in their system. And as long as pot's active ingredient is present in a user, it stands to reason that this person is partly under the influence.

For the hard science here, let's turn to an early study on the matter, published in the journal Drug and Alcohol Dependence in 1985. Researchers recruited 13 male marijuana smokers and had them smoke either a placebo joint or the real deal, afterward measuring physiological changes like increased heart rate, noting any reported subjective effects and testing the participants with the behavioral tasks of card sorting, free recall and time production (in which a subject attempts to accurately gauge the passage of seconds or minutes).

When these same tests and tasks were repeated the next morning, approximately nine hours after consumption, participants who had smoked marijuana still felt subjective differences that the placebo group had not, and their performance on the time production task was still off.

"These apparent 'hangover' effects were different from the acute effects of marijuana," the authors wrote. "These apparent findings suggest that marijuana smoking can produce residual (hangover) effects the day after smoking."

Even more telling: The marijuana used in this study was 2.9% THC, markedly less potent than much of the legal weed sold today, which tends to hover between 10% and 30%. If that little THC can still affect your senses the morning after, then higher concentrations of it will almost definitely have more impact in the same time frame — there's just more of it to process and metabolize.

Still, a similar 1998 study conducted with 3.6% THC weed concluded that "the residual effects of smoking a single marijuana cigarette are minimal." Which just goes to show that whatever a marijuana hangover is, it's rarely extreme.

But what does a marijuana hangover actually feel like?

Beyond the establishment of residual "morning after" effects, there's not much data about the marijuana hangover experience. Instead, we're stuck with anecdotal evidence, which is almost as varied as initial responses to the drug.

Some describe it as "a general fog that hangs around the next morning, a sluggishness that sits deep in the bones." Others report headaches, red eyes and waking in confusion — symptoms that seem more in line with alcohol hangovers. An Urban Dictionary contributor has given us this broad definition: "When your body experiences the negative side effects of being high without the pleasurable mental symptoms the morning after a smoke." Oral dryness, or "cotton mouth," is also associated with heavy marijuana use. Unlike the ethanol in alcohol, however, weed doesn't actually dehydrate the body (or cause the resulting electrolyte imbalances). Instead, it simply inhibits the secretion of saliva. Even so, the discomfort may be pronounced.

While the causes of alcohol hangovers are plentiful and not all well-understood, we have certain indications that some of its symptoms relate to the inflammation of the immune system. Cannabinoids, it seems, can also modulate or disrupt immune function — yet contrary to alcohol, which kicks this network into overdrive, marijuana suppresses host resistance to infection. This means that while the drug itself doesn't necessarily prompt physical aches or pains, it may leave the door open to a cold or flu your body could've otherwise fought off, which is arguably worse than your typical post-party nausea.

Among career potheads, though, the concept of the marijuana hangover is perhaps better articulated by the term "stoned-over." In this account of the morning after, the victim of a marijuana hangover is not so much recovering from negative tail-end effects of the drug as much as they are "still high," likely due to late-night consumption or large dose — or because they have yet to fully metabolize a marijuana edible. Combine that with cannabis' sometimes unpredictable effects on sleep cycles, and it's no wonder that people who use marijuana may occasionally wake up lethargic or disoriented.

How to avoid a marijuana hangover

As with booze, the easiest way to avoid a hangover from marijuana is to abstain completely. Beyond that, weed veterans recommend you limit your intake, stay hydrated, eat healthy and stick to a normal sleep schedule. You know, the sort of things you do to (hopefully) avoid an alcohol hangover.

Worst case scenario, you'll roll over in the morning with a sticky, sour taste in your mouth, plus a scattered mind and the sense that you're moving in slow motion. It's far from the best feeling in the world, but, as opposed to the aftermath of a whiskey bender, you won't be running for the bathroom.