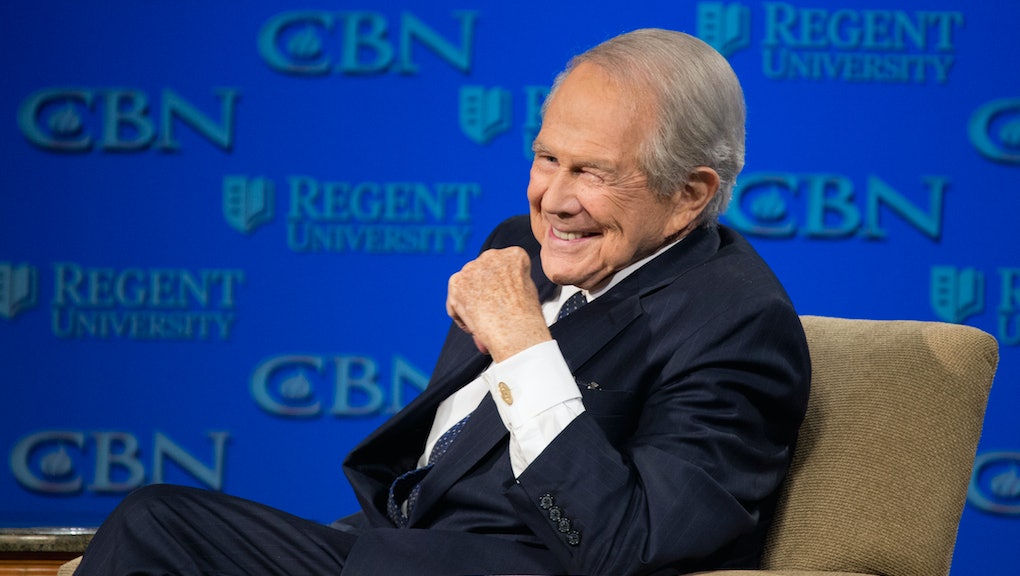 Pat Robertson is concerned that we're being dominated by homosexuals

Media magnate Pat Robertson has a very important question to ask. To paraphrase Joan Cusack in In & Out: "Is everybody gay!?"

During the Monday edition of his daily conservative talk show The 700 Club, multimillionaire and former minister Marion Gordon "Pat" Robertson griped there are just too many gay people these days, gosh darn it — and they're taking over the media.

"But they have dominated — dominated the media, they've dominated the cultural shift and they have infiltrated the major universities," he continued. "It's just unbelievable what's being done. A tiny, tiny minority makes a huge difference. The majority — it's time it wakes up."

Almost no part of Robertson's claim is based in truth. For starters, no one really knows exactly what percentage of Americans identify as lesbian or gay because the U.S. government doesn't capture sexual orientation on the census — and won't through 2020; all we have are estimates. Gallup puts the number at 3.8%, while the Centers for Disease Control and Prevention estimates that 1.6% of Americans are lesbian or gay and 0.7% are bisexual. However, a new GLAAD survey revealed the number could be as high as 12%.

And this "media takeover" Robertson imagines is just not true. According to the latest "Where We Are on TV" report from GLAAD, only about 4.8% of television roles are LGBTQ characters. Robertson shouldn't have too hard a time dodging such a small number of queer characters.

Robertson's estimates of the queer population will become even less accurate as younger generations grow up. Current estimates show that more than half of Generation Z identifies as queer, with most of them falling somewhere on the spectrum of bisexuality. If TV representation actually catches up to that number, it might be hard for Robertson to enjoy a night of TV without half of the characters doing something he wouldn't want to see.

Robertson does have a solution in mind to this queer media onslaught he's created: Kevin Sorbo, TV's Hercules. Robertson said he and Sorbo are working together on some scripts to put Christians back in the media spotlight.

"Kevin Sorbo brought me some scripts so I just finished reading some scripts," Robertson said. "I got one that I think would make a pretty good movie. I'm going to talk to Kevin to see what he thinks. We gotta make some more movies."