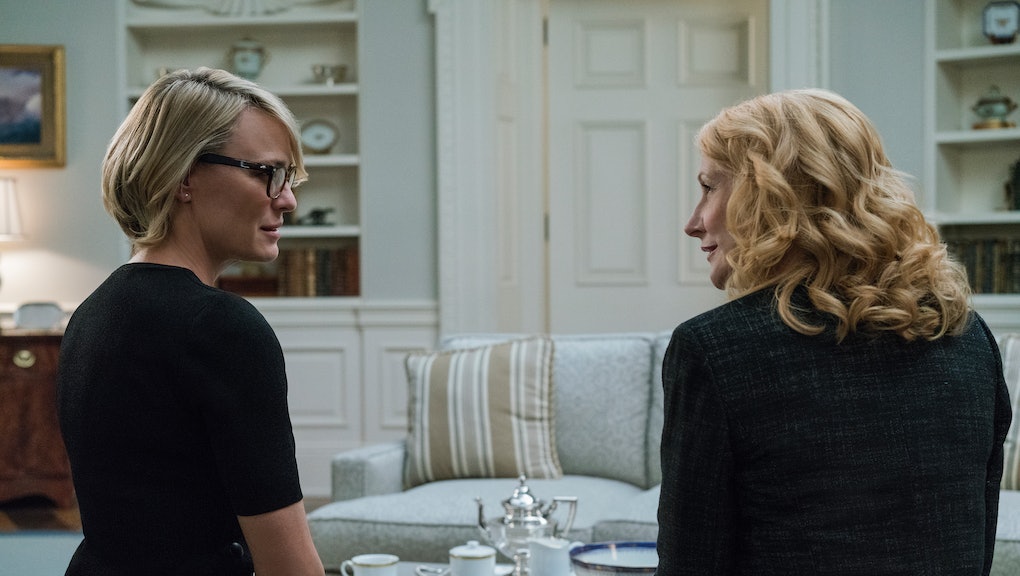 'House of Cards' streaming: Watch seasons 1 through 4 ahead of May release

The Underwoods are coming back for the fifth season of House of Cards in May, and we've been waiting ever so patiently.

Season five of the hit show drops on Netflix on May 30, with all 13 episodes available to watch immediately on the streaming service. In other words, you have two months to catch up on the first four seasons of the political drama, all of which are available to stream on Netflix now.

Thanks to Netflix, here's the synopsis for the upcoming season:

A lot happened during the first four seasons of the show, so to prepare for season five, here's a quick refresher on what went down on House of Cards so far:

The first season of the show introduced us to Frank Underwood, a power-hungry congressman looking to climb the political ladder any way he can. After being passed over for secretary of state by the newly elected president, Frank is not happy. He comes up with a strategy to get back at those who he feels wronged him. His wife, Claire, is by his side, but the two both seem to be playing a dirty game. Zoe Barnes is an eager journalist looking to score a big scoop who gets involved with Frank for all the wrong reasons. When Rep. Peter Russo proves a threat to Frank's plans, Frank takes matters into his own hands and kills him.

After scheming his way to the top, Frank is asked to serve as vice president in season two. He is sworn in, but the cracks in his carefully crafted facade are beginning to show. Zoe is trying to uncover who murdered Peter and confronts Frank — but unfortunately for her, Frank kills her to eliminate a loose end. Claire has a revealing sit-down interview in which she admits to being raped. As a result of a money-laundering scheme between President Garrett Walker's longtime associate, Raymond Tusk, and the Chinese, Walker resigns amid calls for his impeachment. Frank becomes the new president of the United States.

By season three, Underwood is on a mission and he gears up for re-election. Democrat Heather Dunbar is also running and, of course, Frank isn't too in love with the idea. He convinces Jackie Sharp to run as well, promising to make her his vice president if he wins the election and defeats Dunbar. At the same time, after vying for the position of U.S. ambassador to the United Nations, Claire struggles with her relationship with Frank.

In the fourth season, Claire and Frank's marriage has fallen apart. The couple is no longer together and Claire moves back in with her mother in Texas. After reconsidering her options, Claire offers Frank a choice: Make her his running mate or she files for divorce. Lucas Goodwin is released from prison and shows up at a rally to shoot Frank. He had attempted to prove Frank killed both Zoe and Peter, but was brushed off as mentally disturbed.

After spending several episodes in a coma from his attempted assassination, Frank is released after getting a new liver. He reunites with Claire and the two becoming running mates, albeit surreptitiously. When their campaign starts failing and a damaging newspaper article is released during the Republican National Convention, Claire convinces Frank to run a fear-mongering message to distract the nation, declaring they're at war with the Islamic Caliphate Organization.

And that's what you missed on House of Cards.