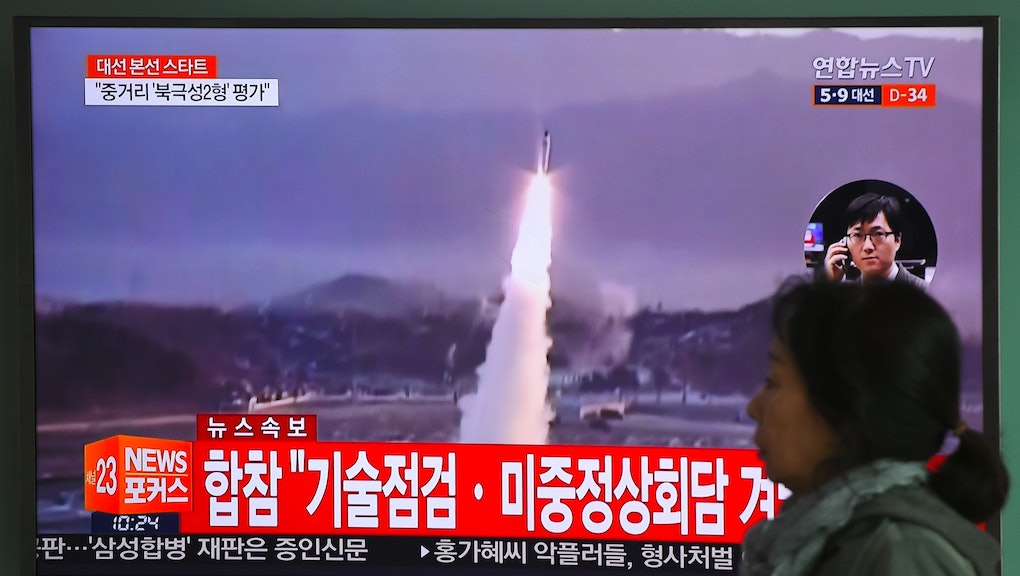 Health care, travel bans and the Supreme Court have consumed the early days of Donald Trump's presidency. But every now and again, the administration has also ratcheted up the tension with North Korea. But it's difficult to know how Trump will handle a nuclear threat from the longtime adversary.

Last year, North Korea launched its largest nuclear test to date. The country claimed it could now mount a warhead on a ballistic missile, meaning it could potentially nuke South Korea, Japan or even the United States. The U.S. warned of "serious consequences" at the time. Those consequences were more stringent United Nations sanctions targeting the North's coal production.

In January, key North Korea ally China banned exports to the country of goods that could be used to build missiles. China stopped all its coal imports from North Korea in February to pressure the nation to stop tests.

After years of testing, North Korean leader Kim Jong-Un claims his nation has the ability to fire a nuclear missile internationally. Trump hoped to focus on trade with Chinese President Xi Jinping. Now, when Jinping visits Mar-a-Lago on Friday, North Korea will dominate the discussion. U.S. officials are saying North Korea's latest missile test was unsuccessful, but that does not placate their concern. With a senior U.S. official saying "the clock has now run out," the White House is signaling it will not allow further North Korean aggression. Trump said recently that China must suppress North Korea, or "we will."

Presidents George W. Bush and Barack Obama made similar threats, only to tighten statements and avoid conflict. Is this similar bluster? Or will Trump handle the situation differently?

This is Mic's daily read on Donald Trump's America. Welcome to the political newsletter that thinks we need a gut check on North Korea.

All eyes on North Korea:

•  Today: Trump vs. North Korea? The White House and Secretary of State are issuing stern statements about the longtime American adversary as the Chinese president heads to Mar-a-Lago.

•  More: The latest on the Neil Gorsuch showdown.

•  Even more: The Freedom Caucus is trying to make health care happen — but it's probably not going to happen.

Sen. Majority Leader Mitch McConnell is poised to exercise his own "nuclear option" to allow the Supreme Court confirmation of Judge Neil Gorsuch. Oregon Sen. Jeff Merkley, an early Gorsuch opponent, began holding the Senate floor at 6:45 p.m. on Tuesday. (He stopped speaking shortly after 10 a.m. Eastern.) Democratic opposition to Gorsuch is firm. McConnell started the clock on Tuesday by setting a vote to end the filibuster on Thursday. When he does not get 60 votes, McConnell will declare a simple majority is necessary to confirm Supreme Court nominees — the "nuclear option."

News broke Tuesday that two paragraphs in a book written by Gorsuch were copied nearly verbatim from a law review article. Ethicists did not reach a consensus about whether the text was clear plagiarism, and the news will change little. The conservative populist Breitbart and establishment National Review both dismissed the report.

Read Mic's coverage of the progressives who are planning primary challenges against three Senate Democrats who said they would vote for Gorsuch. All three are up for reelection in 2018 in states Trump won handily.

Health care is back. Wait, no, it's not.

Another day, another meeting between Vice President Mike Pence and House conservatives, another sun sets without a deal on health care reform. Pence is taking the lead in convincing his former conservative colleagues to support a White House proposal. The Freedom Caucus, meanwhile, is keeping health care on the agenda.

Conservatives want a wholesale repeal of the Affordable Care Act or an effective gutting of Obamacare's core provisions. (Note that, for the first time, a majority of Americans now approve of the ACA.) That could mean cutting essential health benefits requiring all insurers to cover things like hospitalization and addiction treatment, while allowing insurers to charge sicker people more than healthier people. Newsflash: Moderate Republicans will not accept that.

The Susan Rice clap back on Russia

Bloomberg reported former Obama administration National Security Adviser Susan Rice asked intelligence officials to "unmask" the names of Americans listed in surveillance reports. It turns out some of those names were Trump transition officials. Rice's response: I was doing my job. "I leaked nothing to nobody," Rice said Tuesday.

Larger question: If people who work for the president show up on U.S. foreign surveillance reports, is that a bigger story than whether Rice asked for their identities?

•  Press Secretary Sean Spicer condemned a chemical weapons attack that left at least 70 people dead in Syria. But Spicer said given the complexity of the situation, the attack will not change the U.S. approach to Syria. A Trump statement blamed Obama for not acting in 2012 against chemical weapons.

•  A running list of advertisers leaving Fox News' The O'Reilly Factor in the wake of further sexual harassment allegations against the conservative cable star. (Mic)

Heard much from Sen. Bernie Sanders lately? The former presidential candidate has been active. He introduced a bill Monday that would make college tuition free. He travels frequently, from Mississippi to Massachusetts, to rally progressives. On Tuesday, Sanders endorsed the Virginia Democratic gubernatorial candidate who has little establishment backing. A 13-minute video of the senator attacking Gorsuch on Tuesday went viral. And he's keeping up with his supporters via a show on Facebook Live.

Sanders has said he will not run for president again, but watch him closely. He's charting a progressive path for the Democratic party in the Trump era.