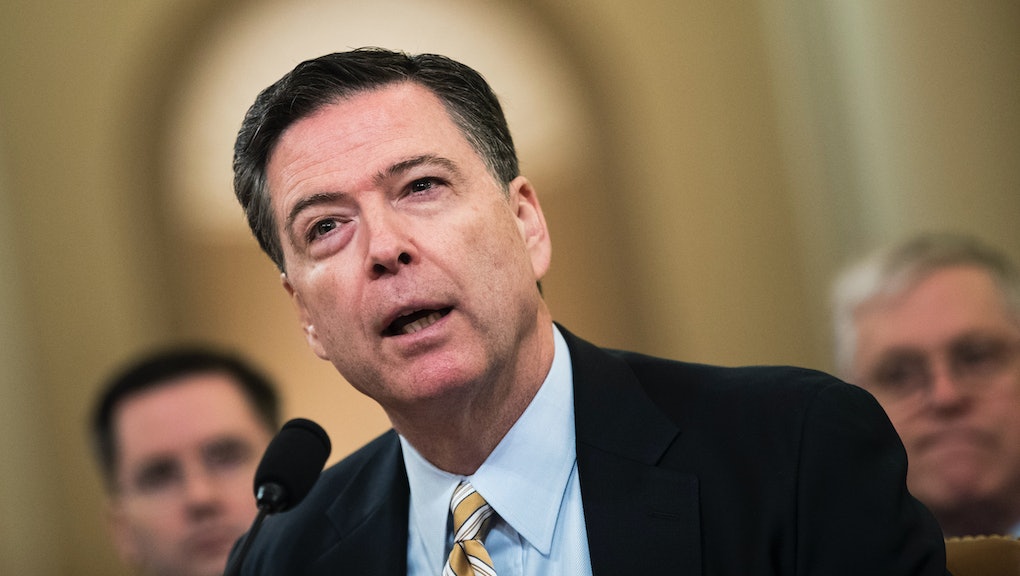 On March 20, FBI Director James Comey publicly revealed what many had long speculated: The FBI was investigating President Donald Trump and his administration's ties to Russia.

Comey has yet to reveal specific details about the investigation or comment on specific people of interest, such as Paul Manafort and Michael Flynn and their alleged Russian ties. But he did reveal that there was no evidence to back up Trump's claim that he was wiretapped by the Obama administration. In January, U.S. intelligence agencies reported that the pre-election hack of the DNC was committed by the Russian government.

Here's what we know about the FBI investigation so far.

Timeline of the Russia probes

During his March 20 testimony, Comey revealed that the investigation into Trump's Russia ties began in July 2016, nearly four months before the election. During a line of questioning by New York Rep. Elise Stefanik, Comey noted that though the Department of Justice had been aware of the investigation since its start, he had only notified congressional leadership about the investigation "sometime recently."

"I think our decision was it was a matter of such sensitivity that we wouldn't include it in the quarterly briefings," Comey explained to justify the delayed announcement.

As for how long the investigation will take? The New York Times noted that FBI counterintelligence investigations are the agency's "most difficult and time-consuming cases," meaning its conclusion could be years away.

The ties the FBI is investigating, CBS News reported, stretch back to March 2016. An intelligence report cited by CBS noted that this is when the Russian government "began cyber operations against the U.S. election."

The FBI investigation, as reported by CBS, is currently working to determine whether officials from the Trump campaign aided Russia in helping to carry out the cyber attacks against Hillary Clinton's campaign and the Democratic National Committee.

Another report by CNN alleged the FBI has information suggesting Trump associates "possibly coordinated" the release of damaging information to Clinton's campaign with Russian operatives.

Comey's investigation into Trump's Russian ties before the election, however, has been a source of criticism, as Comey failed to reveal the investigation while being quick to disclose the agency's probe into Hillary Clinton's emails — much to her campaign's detriment.

A report from WhoWhatWhy suggested that this delayed announcing of the Russia investigation could be because it would jeopardize the agency's long-running investigation into organized Russian crime. This existing investigation, the publication noted, has deep Trump ties, involving numerous Trump Tower occupants and Trump associate — and FBI informant — Felix Sater.

A separate report by Newsweek, however, alleged that Comey wanted to write an op-ed piece announcing Russia's election meddling in summer 2016, but was ultimately rebuffed by the Obama administration.

Scope of the Russia investigations

The FBI is pouring resources into the large-scale investigation. Sources cited by CBS noted that "dozens of agents" are helping with the investigation in Washington, New York and London, and intelligence is also being gathered from inside Russia by the NSA and CIA.

The Financial Times reported that the FBI is establishing a special unit in its Washington headquarters to oversee the investigation, which will be comprised of "20 dedicated agents drawn from across the country" led by an FBI counterintelligence specialist. Comey will be briefed weekly by the special unit, who will begin work in May.

The special unit, the FT reported, is a sign of how seriously the agency is taking the sprawling Russia allegations, as most investigations are typically run out of one of the agency's field offices.

"It's getting unwieldy," an FBI source told the FT about the investigation. "It's too big and it's on the front page of the newspaper every day."

According to the BBC, at the heart of the FBI probe is the controversial dossier on Trump compiled by former British MI6 agent Christopher Steele. The document made waves in January by revealing many unverified claims about the president — including a memorable night with Russian prostitutes.

The BBC reported that Comey is now using the high-profile dossier as a "roadmap" for the investigation. Prior to the dossier's public reveal, the Washington Post reported, the FBI had planned to pay Steele to continue his research on behalf of the intelligence agency, but the alliance never happened once the dossier's contents were made public.

Though many claims in the dossier remain unverified — including the most attention-grabbing allegation — CNN reported in February that U.S. investigators were able to verify some of the communications detailed in the 35-page report. The BBC, too, confirmed a report in the dossier that Russian diplomat Mikhail Kalugin was "a spy under diplomatic cover."