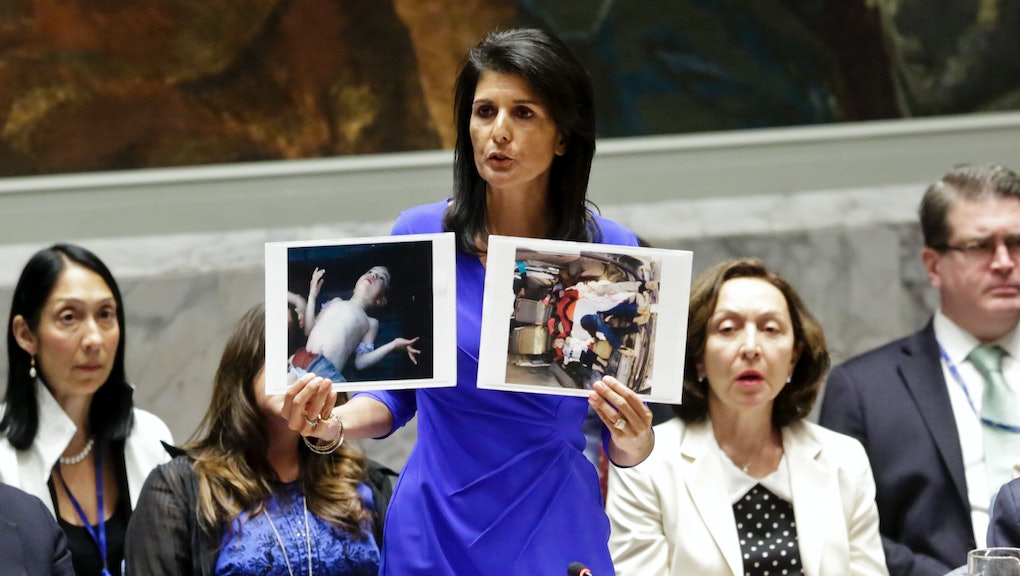 What is sarin gas? Syria gas attack likely involved this chemical that attacks the nervous system.

At least 100 people, including children, died in a chemical attack in Syria on Tuesday, according to Turkey. The U.S. has declared the attack on the rebel-held area to be the responsibility of Syrian President Bashar al-Assad, while Russia has tried to deny the regime’s culpability.

The suspected chemical used in the attack is sarin, a lethal nerve agent that can kill victims within minutes of contact.

Sarin was a pesticide originally weaponized by the Nazis

Nazi scientists developed the weaponized sarin, originally developed as a pesticide, in 1938. According to the World Health Organization, sarin is 26 times more deadly than cyanide, requiring only a "pinprick-sized droplet" to "kill a human."

The Centers for Disease Control and Prevention call sarin the "most volatile of the nerve agents." A person exposed to sarin is likely to stop breathing due to the overstimulation of glands and muscles, as sarin interferes with the enzyme responsible for their regulation.

Videos from Syria showing attack survivors being stripped and hosed off is evidence that the individuals experiencing respiratory failure are victim of a nerve agent attack. Both removal of clothing and immediate washing of the entire body are recommended as immediate steps for anyone exposed to sarin.

Assad regime has a history of war crime accusations

Despite "overwhelming evidence," Assad has repeatedly denied using chemical agents in illegal war actions against his own people. Evidence-based accusations have persisted throughout the ongoing civil war in Syria, currently in its sixth year.

The Assad regime has been defended by Russia on the world stage. Today, U.S. Ambassador to the United Nations Nikki Haley used her speech at an emergency meeting to directly confront Russia about its alleged complicity with the Assad regime in defending the country amid humanitarian violations and war crimes.