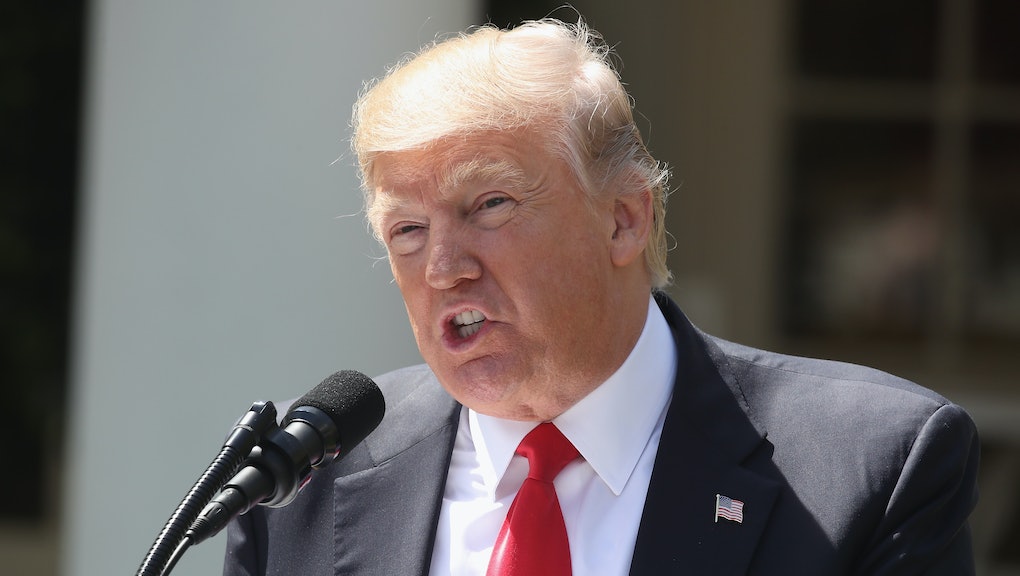 That's the answer President Donald Trump gave reporters when asked what he would do about Syria after the Assad regime killed upward of 70 of its own citizens in a chemical attack on Tuesday.

Trump, speaking at a joint news conference with Jordan's King Abdullah at the White House on Wednesday, said the "terrible affront to humanity" had "crossed a lot of lines" for him. He seemed to suggest the U.S. was considering a military response — though he wouldn't say what it might be.

"Militarily, I don't like to say where I'm going or what I'm doing," Trump said, echoing statements he made on the campaign trail in which he claimed to have a plan to defeat ISIS but refused to describe it because he did not want to "broadcast to the enemy exactly what my plan is."

In a statement Tuesday, Trump blamed former President Barack Obama for the brutal attack, saying that the "heinous actions by the Bashar al-Assad regime are a consequence of the past administration's weakness and irresolution."

On Wednesday, he once again blamed his predecessor for the attack, saying he would have preferred the U.S. to have never intervened in the Middle East, but that "once it started, we got out the wrong way."

"That attack on children yesterday had a big impact on me," Trump said. "Big impact... And it's very, very possible — and I will tell you, it's already happened — that my attitude toward Syria and Assad has changed very much."

Trump said the attack went "beyond a red line" for him — a reference to the "line" Obama established against Syria's use of chemical weapons — but was ambiguous when pressed as to whether or not his administration would intervene.

Though he had previously tweeted that Obama should not use force against Assad — even if the Syrian leader used chemical weapons — Trump said Obama's red line was a "blank threat" that "set us back a long ways."