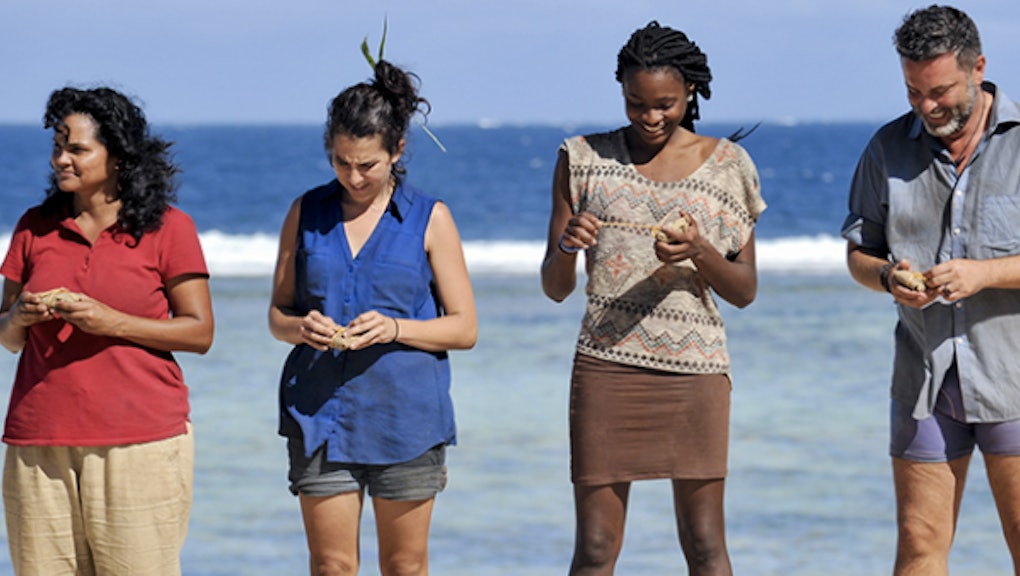 'Survivor' 2017: Who got voted off in episode 5? Hannah Shapiro recaps 'Game Changers.'

The complicated game that is Survivor

I really enjoyed episode five of Game Changers. Survivor at its best is a brilliant game of multi-level manipulation, gameplay and moves. This episode does a wonderful job of showcasing the many layers of the game and the trickiness that goes into managing it all. As someone who has played, I know how hard it can be to keep all the plates spinning. I loved seeing an episode of the show that clearly illustrated how much there is to keep track of in Survivor: the votes, the people and the mental sanity.

Let's dive into this episode just like Ozzy dives into the water — with grace, ease and shirtless.

I've mentioned this before, but I really understand and love watching tribes return from tribal council. Tribal is the ultimate revealer of truths, and for those who end up left out of a vote or having to explain a blindside, coming back can be real tricky. Aubry Bracco is the only one who returns to camp having voted incorrectly in episode four. She handles herself with grace, compliments Sandra on the move and even asks calm, insightful questions. That's how you do it folks. That's why I don't worry about my doppelgänger.

On Mana, Tai Trang goes for an early morning idol hunt. I giggled out loud during this idol find. Oftentimes on Survivor you feel like you're in an adult playground. Challenges are built just for you and idols are hidden. Sure, you're starving and tired, but it's also quite fun. Tai has to pour water over the well boards to reveal a symbol. That symbol leads to an idol. How cool is that? So very cool. Good on Tai for finding another idol.

Tribe Swap: Luck of the draw

Tribe swaps are a staple of Survivor at this point. The pre-merge game is no longer simply about keeping a tribe strong, but about surviving the curveballs of a changing game. And in returning player seasons, more than one swap before the merge is common.

I have very mixed feelings about the term "screwed in a swap." There are two arguments about this. One side claims that bad luck in a swap can lead to a player's demise, no matter how good they are. The other counters that Survivor is about getting out of tricky situations like a bad swap. That is the game itself. Episode five supports the first side — that a swap can lead to the demise of even a great player. I think it's situational, based on the season and the player put in that position.

Some highlights of this "drop your buff moment" are: Aubry literally shimmying with excitement, Sandra Diaz-Twine nervously picking, Zeke Smith quietly checking in with his alliances as they change colors and Debbie Wanner picking a map instead of a buff.

I'll tell you all my thoughts about Debbie's luck of the draw in a bit. Overall, solid swap moment. Good job to the handsome host Jeffery Probst.

There isn't a ton to chat about Mana-wise. There are a handful of introductions (yes, even this deep into the game, you can meet new people) and the realization that they've been living off just coconuts at the Mana beach. That may not mean a lot to the folks at home, but to me that means upset bellies all the time.

Brad Culpepper and Troy "Troyzan" Robertson bond over being the only two dudes on a beach full of ladies. I think it's interesting that alliances are often born just out of similarities and comfort. The shirtless bros chill and bond.

Here's the basic breakdown at the new Nuku: Ozzy Lusth, Andrea Boehlke, Sarah Lacina and Zeke have the majority and have been together since day one. Tai started with them, spent time on a different swap beach and now is back with them. Sandra and Jeff Varner are the newest, and therefore, most at the bottom.

Okay, now that the simple stuff is out of the way, let's get to the fun. Each vote on Survivor is complicated by the possibility of idols, unpredictable players and persuasive people. It's never as simple as deciding on a vote. There is the real plan, the fake plan and everyone must be worked and told certain information. A slip of the wrong information could put the real plan in jeopardy.

Zeke is brilliant this episode. He breaks down clearly what he wants and who needs to be told what. I played with Zeke on season 33, Survivor: Millennials vs. Gen X. As one of the people he trusted the most, despite this leading to his downfall, I have a pretty good sense of how smart Zeke is as a player. Zeke could always see the playing field, knew how and when to talk to certain people and did it all with an ease that made tricky votes look easy. This episode highlights the Survivor skills I was already well-aware Zeke has.

Zeke and his alliance target Sandra: She's a two-time winner and a dangerous player. Zeke speaks a truth that many people underestimate: If you leave a dangerous player in the game too long, they could end up closer to the end then you ever thought possible. Pushing a vote off until tomorrow is never a smart idea.

While all this is happening, Sandra keeps calm. And Tai finds yet another idol using magical wood. And once again I giggled at how cool that was.

I'll be honest, as a past player I got upset over this whole secret reward thing in a way most folks back home won't. I remember missing out on a random PB&J summit my season and the jealousy of not having the luck of the draw is real out there.

Debbie was told she would be headed to "exile island," only to return after the next vote. Turns out, Debbie is taken to a yacht where she is treated to food, a comfy hammock and the best date a Survivor fan could ask for: John Cochran, winner of season 26, Survivor Caramoan: Fans vs. Favorites, shows up to spend time with Debbie, give her advice and more. As someone who would definitely say yes to a date with Cochran (I like my boys nerdy and with a knowledge of Survivor), this whole shebang made me jealous on many levels.

Not only does Debbie benefit from the ear of a third party — which is much more valuable when you can't fully trust anyone in the game — she is also given an advantage. A choice of three advantages, actually. Debbie chooses the "extra vote" option.

As Debbie cries into Cochran's arms, I can't help but feel that this break was a much needed mental rest for her as well. And for that, I'm glad.

If this is an episode about luck of the draw, Debbie really lucked out.

Zeke and Varner lay on the rocks and bond. There is gameplay here as Zeke plants the seeds for his fake vote. However, there is also a level of human connection and empathy. Varner laments about how he has played twice and never made the jury. Making the jury as a Survivor player is a pretty big honor. Making the jury means that you played well on some level and, more importantly, you get to be a part of the game for the rest of the season. Pre-jury members disappear, having no say in who wins and really missing out on a large chunk of the adventure. Varner is the only player to have played twice and never made the jury (besides Caleb Reynolds now). Zeke clearly empathizes with Varner as a fan, something that goes beyond gameplay.

Varner believes Zeke as he gets fed the fake vote of Tai and goes to Sandra with the "good" news. This is a moment in which the brilliance of Sandra is highlighted. Sandra smells the BS instantly in a way Varner cannot. Sandra sees her demise written on the wall — or in the sand, or on a coconut — and will prove during the rest of episode five why she wears a Survivor crown.

This challenge is an adult jungle gym with a swimming portion, monkey bars and a really heavy puzzle. It's clear who feels safe and who doesn't. Ozzy moves with a casual ease while Varner screeches in fear.

The end result is that the new Mana is safe and the new Nuku must head to tribal council.

New Nuku: A queen is beheaded, yet still brilliant

The vote for this tribal has been laid out throughout episode five so I won't go back into all the details now. The basics are that the vote is Sandra, and Tai is the fake vote. The only other person not in the know is Varner. Varner even chuckles as he exclaims that him and Sandra are no longer on the bottom. But Sandra knows better.

Sandra understands that her head is very much on the chopping block. Most people on the block are frantic, scared and running around. Sandra keeps calm and lays out a pretty good argument to those who have the numbers. Sandra points out that she is a good target to shield other players. Also, there is the fear of the "Kao Rong Three": the three players who all played together in the past. They have a bond come merge time.

Sarah describes the magic of Sandra:

The reason Sandra has won twice is she doesn't come off as the most dangerous person in the game ... The way Sandra talks to people is she's grooming us. She doesn't pressure you. Her voice never raises. It's calm. And she just starts to suck you in.

Not only does Sandra calmly state her case but she also shows her extreme power at mental manipulation. I credit Sandra for Tai's paranoid breakdown both before tribal and during. Sandra acts so calm that Tai freaks out and convinces himself it may be him. Tai's freakout is so big, spitting out Ozzy's name in the confusion, that even his alliances consider just getting rid of him. Tribal becomes another whisper fest. Debbie watches the madness of the tribe she is about to join.

Sandra ends up getting the votes, and no idols are played (just imagine if Tai had walked out with two idols in his pocket after J.T. last week). It feels like an almost unavoidable fate for Sandra. She exits and gets her torch snuffed to applause, but not the mean applause that is sometimes featured on Survivor —it's the applause of respect.

Sandra is the queen and stays the queen as far as I'm concerned. Even with a snuffed torch.

Mic has ongoing Survivor coverage. Be sure to check out Hannah's recap of the Game Changers premiere, as well as details about the filming location for season 34. You can follow our main Survivor hub here.