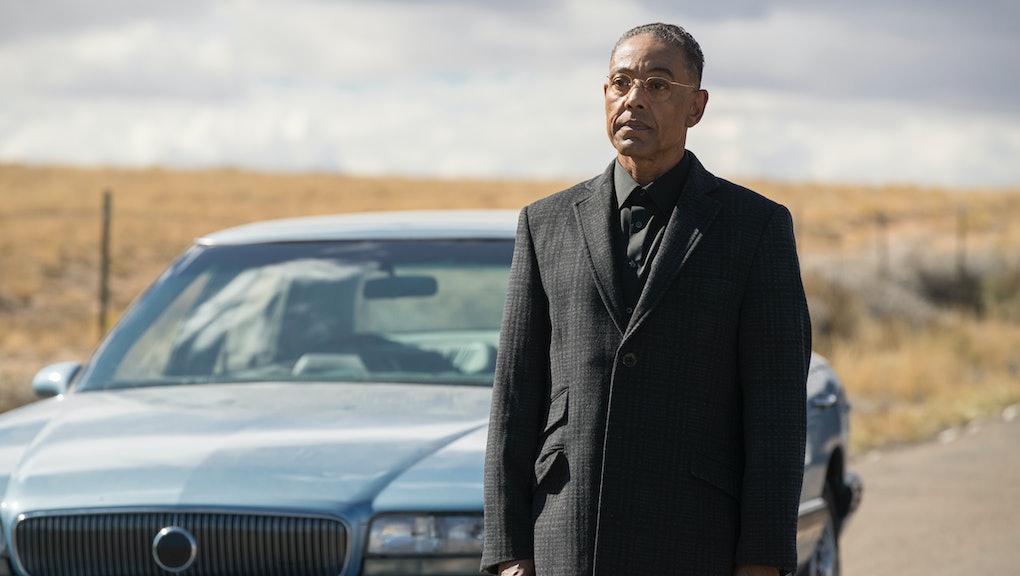 For any Breaking Bad fan, Fring's return — or technically introduction, since Better Call Saul is a prequel — is sure to elicit some nostalgic flashbacks of a box cutter, mass poisoning and a half-melted face, and for non-Breaking Bad fans, this was a very strange sentence.

Ahead of Better Call Saul's season three premiere on Monday, here's seven episodes of Breaking Bad worth revisiting, which spotlight one of television's all-time greatest villains. Major spoilers for Breaking Bad below, obviously.

The episode where Walter White first meets Gus Fring, "Mandala" is an excellent peek into the cautious approach of Fring when it comes to his drug operation. While Saul does arrange for Walter and Jesse to meet with Fring at a Los Pollos Hermanos in town, Jesse arrives late — and, he's high — and Fring never shows.

Later in the episode, however, Walter returns to the restaurant and finds the man is hiding in plain sight — as the restaurant's owner. The pleasantries extended to Walt when Fring keeps up his friendly business owner facade soon fades when Walter persists, and he delivers a chilling dismissal of Walt comparing the two of them, as Fring reveals his true self.

"I don't think we're alike at all, Mr. White," he says. "You are not a cautious man at all. Your partner was late, and he was high." Watch the clip here.

What's so great about "I See You" is how it encapsulates just how effective Gus is at hiding in plain sight. He's a public figure — the owner of a beloved restaurant chain in town — and when a DEA agent is in the hospital, he'll bring complimentary fried chicken for every cop in the building.

It's also the episode where Walter finds out that Gus knew Hank was his brother-in-law — which of course he knows, this man dots his i's and crosses his t's. They share a terse exchange right in the center of the hospital, with cops surrounding them. I should stress here — for the first of many times — just how hypnotic Giancarlo Esposito's performance as Fring is in this scene.

"Now thank me and shake my hand," he says curtly after the end of their conversation.

The awkwardness of the dinner scene between Fring and Walter in "Abiquiú" pales in comparison to the dinner Jesse spent at the White residence later in the series, but it was, perhaps, one of the few sincere windows into Fring's backstory. Fring talks about the Chilean soup he makes for the two of them reminding him of his childhood, while Walter, uh, talks about the hippocampus region of the human brain. Watch the scene here.

After this episode, I've never been able to look at a box cutter the same way again. As if any Breaking Bad fan needs a refresher, but this is the season four premiere following Jesse's murder of Gale. Fring's henchman Victor, who has apparently perfected Walter's meth recipe in the lab, finds Gale's body, but gets spotted by the neighbors who call the police.

So Fring does what, in his own pragmatic code of self-preservation, makes sense. Having been seen by some bystanders, he slices Victor's throat with a box cutter as he slowly bleeds out — much to the shock and horror of Walter, Jesse and Mike. He does this without uttering a word, until he's leaving the lab.

The big treat in "Hermanos" is the flashback to Mexico, when Fring and his original partner Max Arsiniega meet with the Cartel boss Don Eladio to discuss their drug operation (Fring and Max are also the "Hermanos" of Los Pollos Hermanos). It's strongly implied that Fring and Max have a romantic partnership as well, which makes it all the more heartbreaking when a young Hector Salamanca murders Max in front of Fring.

Hector forces Fring to stare at Max's dead eyes; an act of cruelty Fring holds onto, as the episode ends with a cut back to the present, where a paraplegic Hector still refuses to make eye contact with Fring. "Maybe next time," Fring says menacingly.

Aside from the epic shootout in Breaking Bad's series finale, this would probably be the closest Red Wedding-equivalent on the show. In "Salud," Fring exacts his revenge on Don Eladio and the Cartel for what happened to his partner all those years ago — all the more fitting that the plan takes place at the same pool where Max was murdered.

Here, Fring poisons the tequila he presents to Don Eladio as a token of good faith for their renewed partnership. It's only later, when Fring asks to use the restroom, that we learn Fring poisoned the bottle and the pill he swallowed earlier in the episode was likely an emetic. Naturally, Fring gets to see Don Eladio one last time, before the Cartel boss collapses into the pool.

The most GIF-able moment of Breaking Bad, Fring is finally killed by Walter in season four's finale, thanks to a necessary assist from Hector. He willingly allows Walter to plant an explosive on his wheelchair, which he sets off once he and Fring are in the same room at his nursing home. If it's any consolation, Hector does — finally — make eye contact with Fring, before the explosion takes off half of the villain's face.