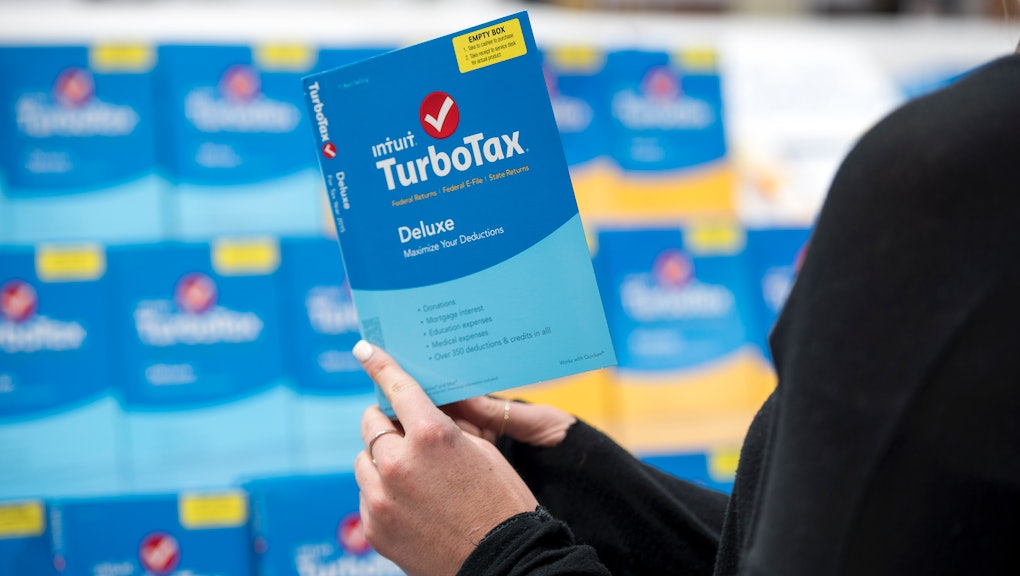 Tax season is undeniably painful. Even if you are Type-A enough to keep track of receipts, log every expense, and meticulously collect 1099s — just in case — there's still the matter of filling out the forms and getting them in on time.

In fact, Americans spend an average of eight hours and $120 filing their taxes each year: That's like a full work day, plus a luxurious dinner for two.

"How could you not curse the government when you fill out your taxes?" said professor Joseph Bankman, a professor of tax law and clinical psychology at Stanford University who also helped design California's simplified tax-filing system. "It's an incredibly hard, anxiety-producing task, and the process doesn't actually tell you very much."

Indeed, there's evidence that tax filing could be far simpler. Since 2013 ProPublica has documented that companies like Intuit, which makes TurboTax, as well as H&R Block — aka the companies that we pay to help us do our taxes — have actually lobbied to maintain the tricky status quo. These companies reportedly spent $5 million in just one year of lobbying, without which consumer advocates argue doing taxes could be cheaper and easier.

The incentive for a tax-software company to try to keep taxes complicated is that it creates more need for its product — a complaint that makes the rounds each spring.

Intuit disputes this narrative: In statement emailed to Mic, the company pointed to its own philanthropic efforts — it estimates that it has donated some 50 million free tax returns through the IRS Free File Program — and accused ProPublica of not reporting the story objectively.

"For the fourth consecutive year, ProPublica has posted the same story. This is an advocacy piece, not objective reporting on an important public policy issue," the statement read. "As the article demonstrates, the strategy of Return Free proponents is to make this about individual companies, rather than debating the merits of the public interest issue."

But, obviously, if filing our taxes got a lot easier, Americans would have less need for companies like Intuit and H&R Block: Both companies have lots of different businesses, but at least for Intuit, TurboTax makes up a little more than a third of the company's $4.2 billion in revenues.

Other countries have an easier way of doing taxes

People working to make Tax Day stink less have two major ideas about how to make it better: return-free filling and pre-populated returns. They're a little different, but the names often get used interchangeably. Either would likely make the lives of filers a lot easier.

Basically, the idea is that the government already has most of the information that it asks you to fill out on your tax returns. So all you'd have to do is double-check Uncle Sam's work, make any changes, and send it back. And if you didn't want a pre-populated form, you could opt out.

Several countries have this system already, and Democrats and Republicans alike have backed various proposals to bring some form of it to the U.S.

Former President Ronald Reagan was a fan, and so was Arnold Schwarzenegger — regarding an initiative for a similar California program when he was governor. On the left, a simpler, cheaper system been backed by Sen. Elizabeth Warren (D-Mass.), among others.

It's rare to find an economic idea that holds muster with both the likes of Reagan and Warren. So what gives?

Why are we still scrambling around Tax Day, digging through reams of paper and double-checking that we got all the right tiny numbers in the right tiny little boxes? Blame lobbying, Bankman said.

How lobbyists keep your taxes complicated

Now, that $5 million tax software lobbying spend pales in comparison to bills racked up by other companies — like health insurer Blue Cross/Blue Shield, which reportedly spent more than $25 million on lobbying in 2016.

But, unlike other outrage-generating policies, IRS filing procedures don't tend to get people on the phone with their Congress rep — which means tax software lobbyists get outsized influence for each dollar spent, Bankman said.

"If you're going to take money from a lobbyist, you can take money on this and nobody is going to press you," Bankman said. "It's not like selling out on clean water."

And, he elaborated, in some cases, elected officials get educated on this issue almost exclusively by tax software lobbyists.

"[Intuit] has great Democrats to lobby the Democrats, and it has great Republicans for Republicans," Bankman said. "So if you're an elected official, you're hearing from someone you like. He's giving you good information, and you're not getting anything else."

To be fair, there are critics of return-free or simplified filing, including Grover Norquist, whose organization Americans for Tax Reform argues for simplifying the tax code. In a 2006 letter to then-President George W. Bush, Norquist wrote that the system could be "dangerous to taxpayers" because the IRS is incentivized to get as much money out of taxpayers as it can.

"To ask the IRS to estimate the tax liability of a taxpayer is akin to asking an alcoholic how much they can have without crossing the line," Norquist wrote in a Huffington Post piece. "The answer will always be 'more.'"

Other opponents, like economist Arlene Holen, a senior fellow at the Technology Policy Institute — which counted Intuit as a sponsor as of 2013 — argue that people who don't trust the government would be pressured into complying with the government anyway, even if the IRS made mistakes.

But return-free filing wouldn't have to be coercive

Advocates for the policy say these arguments are straw men from people with skin in the game, so to speak. Bankman, for example, argues that one of the most common objections against pre-populated returns — that they'd be bad for people with more complicated taxes who itemize — isn't actually true.

"If you itemize, the IRS doesn't know your charitable contributions," Bankman said, "so there are lots of people out there who have one or two things they'd still need to fill out... But these people would actually benefit the most... People with complicated returns have the most paperwork and the highest bills."

Other opponents to pre-filled filing argue it could compromise privacy, and people who would opt out could feel pressure to enroll anyway because the IRS would be too intimidating to correct. But this line of thinking, forwarded by the economists at the Technology Policy Institute, is also flawed, experts say.

"There's no privacy case here," said William Gale, a senior economist under President George H.W. Bush and a chair at the Brookings Institute. "The government already has this information. ... Everyone has an obligation to file a tax return. It's odd that the government doesn't make this more available on a free basis."

"Ostensibly [Norquist and others] oppose it because the government is going to screw people," Stanford's Bankman said. "But the government already has data on your tax return, and it's going to use this no matter what. If you're paranoid, you ought to like this because it forces the government to tell you what numbers are on your file."

The best argument against reforming the IRS's methods, Gale said, is that it would cost money. Free tax preparation wouldn't necessarily be free. You'd have to invest some money into the IRS to bring the program about.

"In order to move to a different system, we'd need to invest significant resources," Gale said. "Under current funding constraints, it wouldn't be possible to do this well."

It's also hard to make the case that limited government resources should go to addressing the problem when many filers with incomes below $64,000 per year are eligible for free tax help anyway through the Free Filing Program. The thing is, as Vox notes, the eligibility requirements are confusing and only 3% of filers end up using it, meaning many people are paying to file their taxes even though they don't need to.

Finally, there are also legitimate privacy concerns surrounding the companies that prepare taxes for free through these programs or through other offerings. As the cost of filing tax returns falls, companies that provide the services are looking for other ways to make money, often, the Wall Street Journal reports, by selling personal and financial data to third parties, although you usually must opt in.

Taken together, Bankman said he believes that none of these objections hold water. He argues that all of these concerns could be addressed through policy, and that no one opposes return-free filing who doesn't have "an ideology or skin in the game."

"The more complicated the system is, the more easy it is to rail against the system," Brooking's Gale said. "There's a sense broadly in other countries [with pre-populated returns] that government can be part of the solution. Here, there seems to be a lot less support for that idea, something that seems very ideological, more so than it is evidence-based."