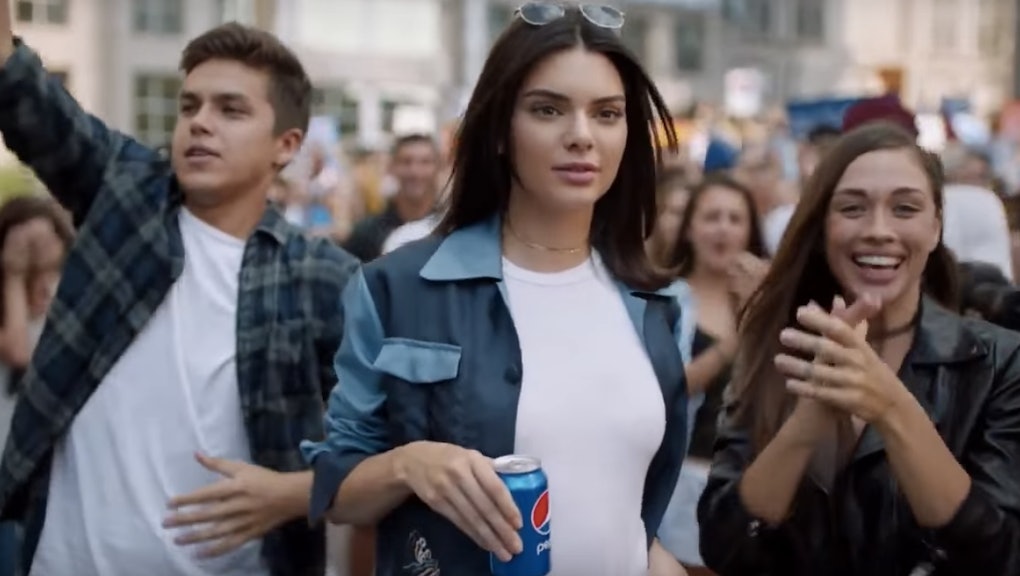 Was the Pepsi debacle the beginning of the end for corporate woke posturing?

After Pepsi ran an advertisement in which Kendall Jenner became a champion of quote-unquote "The Resistance" by giving Pepsi to police officers, the soda company was forced to apologized to Jenner and promise the ad would no longer run on TV.

This isn't the first time Jenner's been called out for positioning herself as a non-political political actor. As Galore wrote this week, the Pepsi ad is part of Jenner's developing "woke storyline," positioning herself as a socially conscious millennial ambassador while shying away from positions that challenge authority. But Jenner is only the latest to come under fire in an assault on manufactured allies.

Since Donald Trump's inauguration, progressives have been mobilized to a constant state of protest. But one particularly potent theme has arisen at the intersection of politics, business and culture throughout 2017 so far: the slow death of symbolic allyship.

What was once perceived as a socially acceptable attempt at diversity and representation by big business and the political establishment is now replaced with zero tolerance for corporations and brands that co-opt modern civil rights struggles, while doing nothing to dismantle oppressive systems.

That goes for millionaires co-opting feminism for the rich, politicians who claim to fight for marginalized communities without offering them any material solutions, or even just men who call themselves feminists in their Tinder bios as a ploy to get laid.

Pepsi decided to seize on an atmosphere of political outcry, and political outcry is what it got. Though many have pointed out that Pepsi's blunder is part of a long history of corporations co-opting resistance and counterculture, the more immediate comparison might be a subtle move the Democratic National Committee pulled on Twitter last month.

In a tweet celebrating the failure of the Republican healthcare plan — a victory that wasn't even really the Democrats' to begin with — the Democratic Party tweeted a photo of an anti-Trump protest encouraging demonstrators to "persist." The image of the protest had been photoshopped to remove anti-capitalist messages in the image.

Although the Democratic Party has failed to take seriously the concerns of the leftists, immigration rights organizers and activists supporting the Muslim community since Trump's election, they still managed to co-opt the populist zeitgeist to advance their platform.

And similar to how Pepsi has been taken to task, so have establishment politicians.

When Sen. Chuck Schumer (D-N.Y.) began voting to confirm Trump's cabinet appointees, protesters showed up outside of his Brooklyn apartment to shout, "Fight, Chuck, fight." Eventually, he promised to vote no at every future opportunity. When Sen. Cory Booker (D-N.J.), a darling of progressive elites, voted against a bill that would lower drug prices by giving his campaign donors some Canadian competition, the backlash was swift and immediate.

At Senate offices and congressional town hall meetings across the country, the new refrain is: "You work for us."

CEOs and startups that make superficial overtures at social progress aren't getting a pass either. When Uber touted their rising diversity statistics, their employees wrote tell-alls about systemic sexual harassment in the workplace. And it isn't enough that a company like Thinx breaks the cultural status quo with body-positive and feminist messaging if its founder can't provide sufficient maternity leave or a safe workspace for its female employees.

The common thread is that these politicians, brands and corporate entities have centered themselves as protagonists in the fight for equality and justice, diverting attention away from the fact that power and capital are perpetuators of inequity.

The protest signs in Pepsi's ad — saying nothing but, "Join the conversation" — and the one photoshopped by the Democrats achieve the same affect: taking the energy of resistance and coring out the political demand to serve an entirely separate agenda than protesters originally intended.

But the time for cheap talk is over, and protesters don't just want a conversation, or symbolic nods to change. They want universal health care, a raise in the minimum wage, accessible reproductive care and protections for immigrants facing state persecution. The goal of black liberation activists isn't to find common ground with the police state. It is, at very least, to reform its role in society, if not to dismantle it entirely.

Anything short of that won't pass the bullshit test. Not anymore. The stakes are just too high.