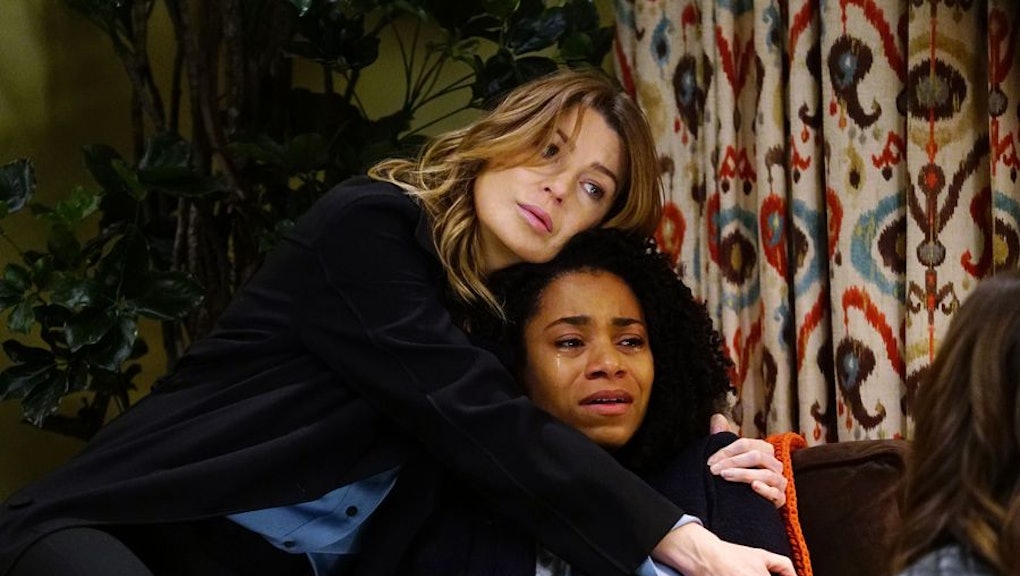 The sun might be setting on Grey's Anatomy's 13th season, but it looks like the clouds will be sticking around for one Dr. Pierce. Fresh off her mother's tragic death, Maggie returns to work intent on distracting herself from her grief. As such, she steals a high-risk surgery on a 29-week-old fetus from Riggs.

Did she crack under the pressure or save the fetus' life? With only five episodes left in season 13, what else went down in the hallowed halls of Grey Sloan Memorial Hospital? Let's dive in!

The aforementioned fetus belongs to Jen and Leo, a married couple whom Owen knows from his days working at a VA hospital. He's intent on giving them the best care possible, which includes fetal surgeon Arizona and heart surgeon Riggs. Given its rarity, Maggie reassigns herself to the case, much to Owen's chagrin. And when Leo overhears Owen telling Arizona that Riggs is the better surgeon for the job, he wants to know why the doctors are changing course.

Maggie visits the couple to assuage their fears, confessing Owen's worried because she lost her mother recently. Ever the pro, she convinces them she's up to the job as chair of the department, and they decide to stick with her. Maggie seems confident about the surgery — at least until Mer and Amelia come to check on her. Maggie tells her sisters that while she appreciates their concern, she doesn't need to be treated with kid gloves. She just wants to do her job, and they're not making it any easier by questioning her capabilities.

With a full gallery and operating room watching her every cut, Maggie begins the operation. But then the alarms go off, signaling the fetus' heart rate has become dangerously low. Arizona implores her to do something, but Maggie seems to freeze under the pressure. After a few panicked moments, she calmly explains she's just giving the fetus a minute. It doesn't take a genius to see Maggie's talking about her own loss, too. Insert sad-face emoji here.

A few seconds later, the fetus' heart rate stabilizes and the OR bursts into applause. But the heart doc isn't exactly in a celebratory mood — and when Jackson comes to see if she's OK, she lashes out. "I feel awful, but I am doing my job while everyone is staring and telling me I'm not up for it," she says, before asking why Jackson couldn't do his job and save her mom. Ouch.

At home that evening, Mer does her best to cheer up Maggie by bringing back an old Grey's favorite: dancing it out. "It's either this or crying," Mer explains, as Maggie and Amelia reluctantly get up and join her. Their hesitance quickly disappears, though, as they give themselves over to the music and the sheer joy you can only get from dancing it out with the people closest to you. (I miss you, Cristina Yang!)

But amid overwhelming grief like Maggie's, dancing it out can only work for so long. She's sitting outside alone when Jackson walks up to deliver Diane's medical records. He explains that by the time Maggie's mom came to Grey Sloan, she was already really sick and pretending like she wasn't. "She lied to both of us," he says, likely because she didn't want to face the truth. Jackson also shows her some photos Diane had given him for safekeeping, images of her traveling the world after she found out about her illness. He says Diane wanted him to be there for Maggie, and that's what he's going to do. Without saying a word, Maggie leans her head against his shoulder, seemingly at peace — at least for the moment.

Side note: I am totally not shipping these two. Japril for life!

— Mer, thinking Maggie's OK, agrees to have a drink with Riggs and see if they like hanging out together. However, she cancels when Maggie comes home crying, so we'll have to wait another day to see these two finally make a go of it.

— Arizona develops — forces, rather — a friendship with Riggs, and the two spend the episode divulging their romantic secrets to each other. When Riggs' face betrays the fact Mer is his object of affection, Arizona goes off on a tangent on the "epic love" Mer had with Derek, obviously surprised Mer would try for a relationship again. Luckily, Riggs doesn't scare easily, and he shows up at Mer's to pick her up for their date. She turns him away, but still — he's not spooked!

— Edwards is assigned an ER case where the patient turns out to be Dr. Cross, a less-than-memorable intern at the hospital whom Edwards first dismisses as having "internitis." She ends up diagnosing him with another -itis — diverticulitis, to be exact — but the problem turns out to be much bigger when she opens him up on the table. As it turns out, Cross has tuberculosis he contracted during a month spent volunteering in Indiana. He'll be fine, of course, but Edwards questions her initial obstruction of his care, one more thing that will likely push her out of Grey Sloan by season's end.

— Richard and Bailey continue their road to reconciliation as he pushes her to admit she was wrong with how she handled Minnick's hiring. As stubborn as they both are, they come to an agreement of sorts by the end of the hour. As far as TV "work spouses" go, Railey — or is it Bichard? — are definitely my favorite.