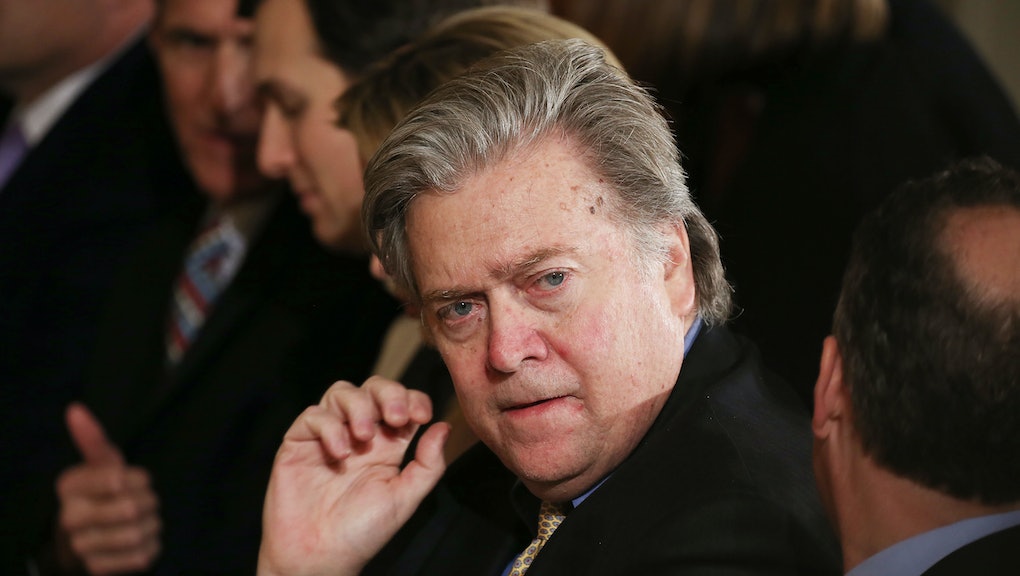 The anti-Trump movement used the term "President Bannon" to annoy Trump. It worked.

When White House chief strategist Steve Bannon was given a permanent spot on President Donald Trump's National Security Council in January, the anti-Trump movement was irate.

In their eyes, Bannon — who ran far-right website Breitbart before moving to Trump's presidential campaign — is a white supremacist who ran a platform that promoted racist content and had no business being in the White House, let alone the NSC.

But when reports surfaced that Bannon was one of the architects of Trump's controversial travel ban, the anti-Bannon fervor hit a fever pitch. Anti-Trump activists — knowing Trump hates ceding the spotlight to anyone — launched the "President Bannon" meme, hoping it would bother Trump enough to push Bannon out of his powerful role in the White House.

It appears to have worked.

According to a New York Times report, Trump removed Bannon from his spot on the NSC partly thanks to the growing sense that Bannon was actually running the show — a notion put forth everywhere from a Time magazine cover to a skit on Saturday Night Live where Bannon, dressed as the grim reaper, forces Trump's hand on all issues.

Others mused that since the President Bannon meme worked, activists should use it for other White House aides they disapprove of, including Trump's son-in-law Jared Kushner.