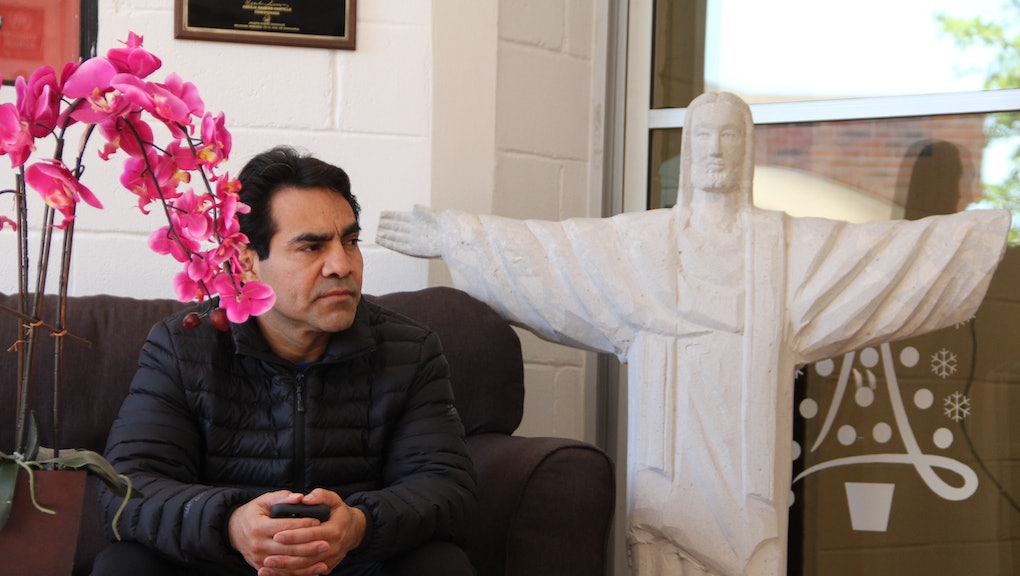 A Trump voter's undocumented husband was just deported to Mexico

Roberto Beristain, father of American citizens, Indiana business owner and husband of a woman who voted for Donald Trump, was deported to Mexico late Tuesday night for being an undocumented immigrant.

Beristain — who has a Social Security card, work permit and driver's license — was detained by Immigration and Customs Enforcement in March during one of his voluntary yearly check-ins, which allowed him to stay in the United States. And on Tuesday, officials went a step further by expelling him from the country.

The traumatic developments have changed his wife's tune. "I wish I didn't vote at all," Helen Beristain told the South Bend Tribune after her husband's detention in March.

Despite their lawyers' filing a habeas corpus petition and requesting a stay on Beristain's removal order, ICE covertly deported him at night without notifying other involved parties and before the immigration judges had a chance to issue rulings.

"This was an attempt to short-circuit the justice process by intentionally removing him before a judge could stop his removal," Adam Ansari, the Beristain family lawyer said, according to the Wall Street Journal. "We were in communication with the government regarding those motions — what they failed to mention was that they were in the process of throwing him out of the country."

Beristain, who owns Eddie's Steak Shed, a popular restaurant in Granger, Indiana, wrote in a press release that officials in the detention center "suddenly told me it was time to go," the Tribune reports.

"They told me to get my stuff, they put me in the back of a van and sped toward the border," Beristain added. "They took me to another facility while in transport to sign paperwork. I asked to speak with my attorney but was told there wasn't time for that. At around 10:00 p.m., I was dropped off at the Mexico-U.S. Border and walked into Mexico."

Ansari and his fellow attorneys say they are now fighting to have Beristain's case reviewed in federal and immigration courts and hope waivers will reduce his 10-year ban from entering the country.

He arrived in America in 1998, but was detained by immigration officials in 2000 during a trip to Niagara Falls with his wife, Ansari said, according to CNN. They got lost and accidentally crossed the Canadian border after missing their exit — on their way back into the U.S., immigration officials "classified him incorrectly" and told him he had to leave within the month. But Helen was pregnant at the time and Beristain chose to stay with his family instead.

"They told me to get my stuff, they put me in the back of a van and sped toward the border."

Being an upstanding citizen, free from any criminal charges or legal violations, federal authorities told him he could stay as long as he checked in every year to prove he was still in good standing. It was during one of these check ins that ICE detained him.

Roberto and Helen Berinstain attempted numerous times to fix his status over the past few decades, all to no avail, Helen told the Tribune.

Upon learning of his wife's support for Trump during the elections, Beristain had expressed concern about the implications of Trump's harsh immigration policies for Mexicans living in America. Helen replied the policies would only apply to "bad hombres," she told the South Bend Tribune.

"All of the good people will come out," she told CNN affiliate WSBT after her husband's detention in March. "I don't think ICE is out there to just detain anybody and break families."

Since Trump became president, ICE raids and enforcement have become "unprecedented," as the government has vastly expanded who is eligible for arrest.

In February, J. Kevin Appleby, the Center for Migration ­Studies of New York's senior director of international migration policy, explained to the Washington Post there's a notable difference between Trump and his predecessor, Barack Obama, when it comes to immigration policy.

"The Obama administration shied away from big displays of enforcement because it would alienate their base," Appleby said. "For Trump, it is red meat for his supporters and fulfills a campaign pledge."