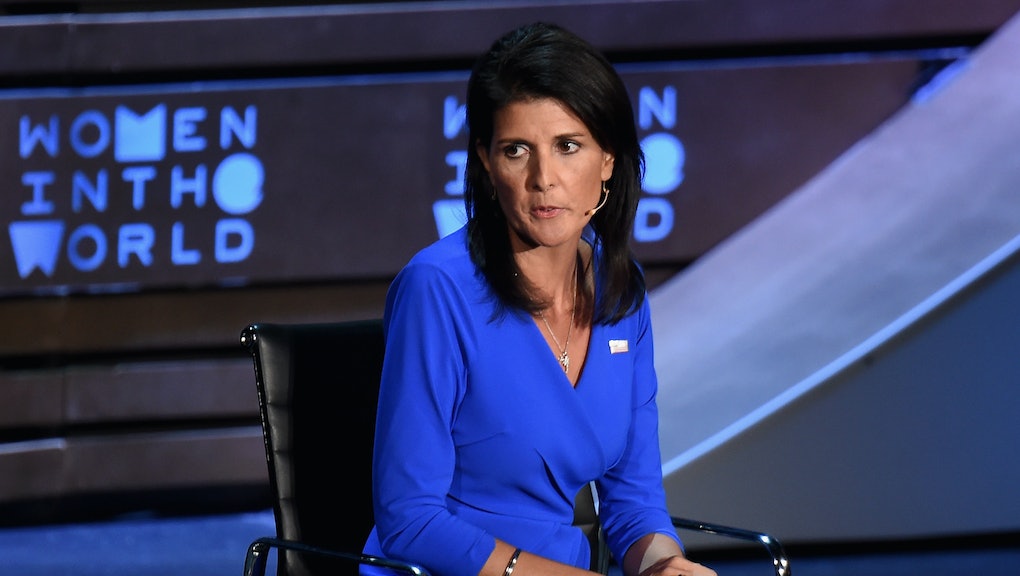 Nikki Haley, the U.S. ambassador to the United Nations, stood before an emergency meeting of the U.N. Security Council on Wednesday and blasted Russia as being complicit in the sarin gas attack believed to have been committed by the Assad regime against a rebel-held area in Syria.

The pointed criticism of Russia's affiliation with the Assad regime was striking in its tone, as President Donald Trump has come under repeated fire for refusing to criticize Russian president Vladimir Putin and going so far as to defend him.

Haley gets booed by audience at Women's Leadership Summit

But after her forceful speech at the U.N., her day took a bit of a different turn. Haley was scheduled to appear at the Women in the World summit in New York City for an interview with MSNBC's Greta van Susteren.

After being asked a pointed question about the Trump administration's overall silence on the issue of Russia, Haley smiled nervously and, in her role as a diplomat for the administration, did her best to defend the administration against the implied accusation, accompanied by cheering from the audience.

It did not go over well.

First, she deflected, saying, "I have hit Russia over the head more times than I can count."

But it was her answer about Trump specifically that sent the audiences into a chorus of boos.

"He very much sees Russia as a problem, and I think if you look at his actions — everybody wants to look at his words, look at his actions ..." Hayley said. "The two things that Russia doesn’t want to see the U.S. do is strengthen their military and expand energy. And the president has done both of those."